Please welcome J. Patrick Black to The Qwillery as part of the 2016 Debut Author Challenge Interviews. Ninth City Burning was published on September 6th by Ace. 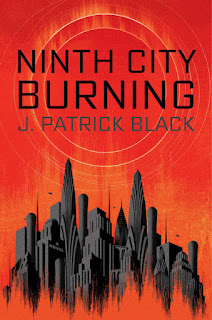 JPB:  Thanks for having me! I've always enjoyed writing, but I didn't get into it seriously until college. I took a creative writing seminar and was just hooked. I've been at it ever since.

JPB:  I suppose I'd say I'm more of a hybrid. The broader the storyline gets, the larger and more sweeping the events involved, the more careful I am about plotting things out in advance, but I like to leave room for surprise and improvisation when it comes to filling in the details. That's especially true when I'm writing something especially character driven; for me it sometimes takes actually writing a scene out to really know what a given character will do or say.

JPB:  Dealing with the fact that every word might not come out perfectly on the first try. It's easy for me to get hung up on the phrasing of a particular sentence or choice of vocabulary and lose track of the bigger picture. I have to remind myself to keep moving even if I'm not absolutely satisfied with the way my writing sounds--there will be time to come back and fuss over the words, but I need to make sure I've got a story first.

JPB:  As I think is the case with a lot of writers in the speculative genres, there those books I encountered as a kid that marked out a territory in my mind that would always be off in some other world. Ursula K. LeGuin's "A Wizard of Earthsea" is one of many, many examples. I'm still an avid reader, and omnivorous, and I'm sure everything I read influences me to some degree or other. I'm a big fan of short stories--Lorrie Moore is one of my favorites--and I've got a soft spot for experimental fiction. Really, though, I'd say I have most of my ideas when I'm away from my desk: walking through the city (hometown: Boston), taking a long drive, standing in line at the supermarket. I'm not sure if those quite qualify as influences, but if so one of my more important ones would have to be going to the beach.

TQ:  Tell us something about Ninth City Burning that is not found in the book description.

JPB:  It has seven first-person narrators, each with his or her own voice.

JPB:  There wasn't really any single moment of inspiration for Ninth City Burning. It was more like whole constellation of different proto-stories, ideas that had been floating around my head--for years, in some cases--merged together to create something larger than any of them. The catalyst was the concept of the fontani, sources capable of creating almost unlimited power, but only within a small area--sort of like wifi. That was the idea that bridged the space between all these other ideas, and allowed me to bring them all together.

One reason science fiction appeals to me is the sheer breadth of possibilities (or, seen another way, the absence of limitations). Every genre has its own tropes and conventions, but with science fiction these are far from required, and in the hands of really great writers can act as a kind of shorthand for the experienced reader. You see scifi elements everywhere, from literary fiction to joyously pulpy action extravaganzas--it can take you anywhere.

I don't consider Ninth City Burning a dystopian novel per se. To me, dystopian fiction tends to revolve around some central issue or ideology the consequence of which the story's author wants to explore. Ninth City Burning certainly has features common to dystopian fiction--there are plenty of totalitarian overtones, for example--but these aren't tied to any particular present day issue. They're a consequence of a highly militarized society, and war has been around longer than history.

TQ:  What sort of research did you do for Ninth City Burning?

JPB:  I read up on my military history, researching different eras of warfare. The conflict at the center of Ninth City Burning is very different from what we see in the modern world, but I had the idea that principles from the past would still apply. I also went back and revisited some of the story's conceptual ancestors: my favorite alien wars, adventures in fantastical other realms, giant robot battles. I had a good idea of the areas of genre I intended to inhabit, and I wanted to get a good view of the territory.

TQ:  In Ninth City Burning, who was the easiest character to write and why? The hardest and why?

JPB:  All of the characters presented their own challenges, but I think I had the easiest time with Kizabel, if only because I felt free to explain as much or as little as I wanted about the ideas behind the story; with most characters I had to be very careful about not loading down the plot with exposition, but Kizabel narrates with footnotes, so if there was some big idea I really wanted to get into, I could use those without interrupting the story. The hardest to write was probably Imway; he's very competent at what he does, and he wants you to know it, so I had to make sure I knew every little specification for everything he describes. Also, he's kind of a jerk, and I wanted that to come through but also feel sympathetic from his perspective; the dissonance between how I thought he was acting (like an ass) and how he thought he was acting (like a completely reasonable person) made his narrative the hardest to balance for me.

TQ:  Which question about Ninth City Burning do you wish someone would ask? Ask it and answer it!

Q: Where does the word "thelemity" come from?

A: Well, Patrick, I'm glad you asked! It comes from a word in Ancient Greek meaning "to will" or "to wish". It seemed like an appropriate root to use when describing an energy with quasi-magical properties.

TQ:  Give us one or two of your favorite non-spoilery quotes from Ninth City Burning.

"When I think on Death, I imagine her as a child, a girl in a white dress with untidy hair, running barefoot through the battlefield, collecting lives like wildflowers."

"And when you think about it, most things that are really fun *aren't* toys."

JPB:  The sequel to Ninth City Burning will (hopefully) be out next year!

We never saw them coming.

Entire cities disappeared in the blink of an eye, leaving nothing but dust and rubble. When an alien race came to make Earth theirs, they brought with them a weapon we had no way to fight, a universe-altering force known as thelemity. It seemed nothing could stop it—until we discovered we could wield the power too.

Five hundred years later, the Earth is locked in a grinding war of attrition. The talented few capable of bending thelemity to their will are trained in elite military academies, destined for the front lines. Those who refused to support the war have been exiled to the wilds of a ruined Earth.

But the enemy's tactics are changing, and Earth's defenders are about to discover this centuries-old war has only just begun. As a terrible new onslaught looms, heroes will rise from unlikely quarters, and fight back.

You may read my review of Ninth City Burning here.

J. Patrick Black has worked as a bartender, a small-town lawyer, a homebuilder, and a costumed theme park character, all while living a secret double life as a fiction writer. While fiction is now his profession, he still finds occasion to ply his other trades as well. He lives in Boston, Massachusetts, where he likes to visit the ocean. NINTH CITY BURNING is his first novel. Find out more about J. Patrick Black online at www.jpatrickblack.com