Please welcome Jessica Estevao to The Qwillery. Whispers Beyond the Veil, the first Change of Fortune Mystery, was published on September 6th by Berkley. 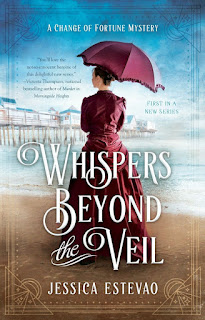 Several years ago my husband and I were looking for a summer place near the water. I had no idea that our search would lead to a new series and a love of historical mystery writing. After looking at places all over the state of Maine we found the perfect spot in Old Orchard Beach. We spent that first summer renovating the house and basking on the beach. By the end of the first month we were utterly charmed.

After all, what’s not to love about seven miles of sandy beach and the last remaining seaside amusement park in New England? But while the kids were building sand castles and perfecting their body surfing technique, I found myself visiting the Harmon Historical Museum and buying antique post cards at Cottage Decor. Slowly, but surely, the history of Old Orchard worked its way into my affections and on my imagination.

I was intrigued to discover our property used to be part of a Methodist campground. While it now has different owners, the natural amphitheater they used for sermons and speakers is still in operation just up the street from our house.

I learned about the different incarnations the town had experienced. In the Victorian era it hosted wealthy families for the entire season at the grand hotels like The Hotel Velvet as well as day-tripping mill girls from neighboring Biddeford.

By the early 1900s Grand Beach was popular with early auto racers as well as pioneering pilots attempting the first trans-continental flights. A few years later the big band era and dance marathons drew the crowds. Soldiers returning from WWII brought their families in droves throughout the middle of the twentieth century.

It was inevitable, I suppose, that all that information would work its magic on the story-telling part of my brain. Before I knew it, I started imagining the buildings and vehicles and amusements from the past still lining the streets. Then, of course, the buildings filled with imaginary people with all their intrigues and peculiarities.

Before long, the influence of Old Orchard had concocted Ruby Proulx, the protagonist for my latest book, Whispers Beyond the Veil. The Gilded Age hotel where she lives and works, her friends and family all invented themselves as I walked along the sand or imagined a trolley car trundling down the street beside me as I strolled to the shops. Reasons for murder and mayhem swooped into my brain like marauding seagulls making a play for picnic lunches.

Just like that, an historical mystery had snuck up on me. I had never intended to turn my hand to historical writing but thanks to a little serendipity it had. 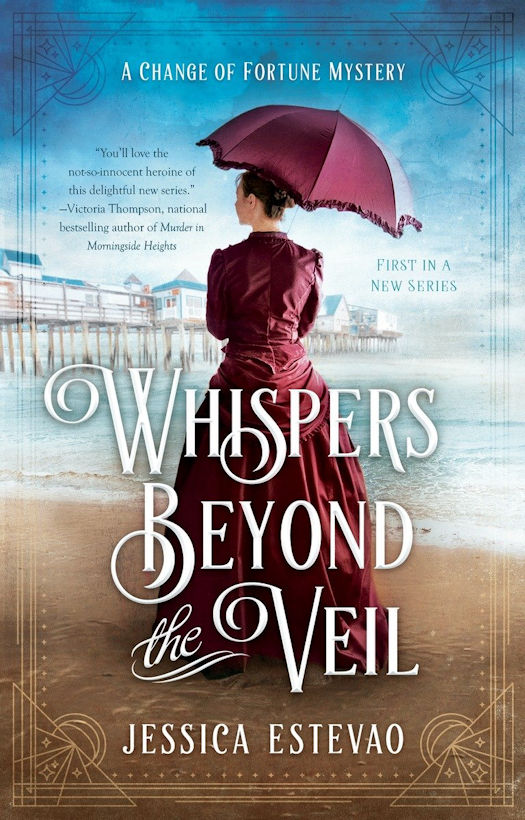 First in a dazzling new historical mystery series featuring Ruby Proulx, a psychic with a questionable past who suddenly finds her future most uncertain…

Canada, 1898. The only life Ruby Proulx has ever known is that of a nomad, traveling across the country with her snake-oil salesman father. She dreams of taking root somewhere, someday, but, until she can, she makes her way by reading tarot cards. Yet she never imagined her own life would take such a turn…

After one of her father’s medical “miracles” goes deadly wrong, Ruby evades authorities by hiding in the seaside resort town of Old Orchard, Maine, where her estranged aunt, Honoria, owns the Hotel Belden, a unique residence that caters to Spiritualists—a place where Ruby should be safe as long as she can keep her dark secret hidden.

But Ruby’s plan begins to crumble after a psychic investigator checks into the hotel and senses Ruby is hiding more than she’s letting on. Now Ruby must do what she can to escape both his attention and Aunt Honoria’s insistence that she has a true gift, before she loses her precious new home and family forever…

Whispers Beyond the Veil is a lovely historical mystery set primarily in Orchard Beach, Maine during the the late 1890s. It was an era of Spiritualism - mediums, seances, tarot cards, and much more.

Ruby Proulx grew up traveling around and appearing in medicine shows with her unscrupulous father who raised her after her mother died in childbirth. The beginning of the novel gives details of this life and a catastrophic event which forces Ruby and her father to separate. Ruby heads to Orchard Beach to her only remaining family - her mother's sister Honoria Belden.

Orchard Beach is a popular seaside resort town and will become even more so when the new pier is finished. It will be the largest pleasure pier in the world. The construction of the pier has attracted crowds to Orchard Beach and its hotels as well as an influx of pickpockets that prey on unsuspecting tourists. As soon as Ruby arrives in Orchard Beach she is accosted by a pickpocket. Not an auspicious beginning to what she hopes will be her new life with her Aunt Honoria.

Honoria Belden owns the Belden Hotel and is thrilled that Ruby has found her way to Orchard Beach. In order to compete with the larger and more luxurious hotels, the Hotel Belden is the place to go in Orchard Beach for the summer season if you are a Spiritualist. Honoria has hired experts in many spiritual disciplines. The Hotel is fully booked and Honoria needs this season to be a huge success or she will lose the Hotel that her family founded. The experts and guests begin to arrive. When the medium that Honoria has booked cancels at the last minute Ruby steps into that roll in order to save the season and help her Aunt.

Ruby feels that she is back to conning people pretending to be a medium and is uncomfortable, hoping that she had left that life behind. Ruby confides to her Aunt that she hears a voice - one that tries to steer her in the right direction. Ruby always thought the voice was a sign of mental illness. Her Aunt reassures her that the women in Ruby's family have 'gifts'. When one of the guests, a renowned debunker of the spiritual, is found murdered on the beach, suspicion falls on all the spiritual practitioners at the Hotel Belden where he was staying and then more squarely on Ruby. She sets out to find the murderer and save herself and her Aunt's Hotel.

Ruby is a wonderful character - she's an independent woman in a time when women were not so independent. She is unafraid of standing up for herself. (Qualities also found in her Aunt Honoria.) Ruby's smart and often unafraid. She has lived in unbearable circumstances with her father and wants to find a home with her Aunt in Orchard Beach. She has been a con artist and is trying to leave that life behind, which puts sometimes puts her in an ethical quandary.

The hotel guests, hired experts, and hotel staff are all interesting and have their own stories. There is a terrific array of townspeople some of who are nicer than others who are introduced in the novel. I'm looking forward to see many of them again as there are subplots swirling around some of them.

Whispers Beyond the Veil is a fantastic foundational novel for this series. Estevao introduces the wonderful setting of Orchard Beach as well as the well-developed cast of characters for future stories. The setting of Orchard Beach is lovingly detailed. While the complex mystery of who killed whom and why are resolved there is so much more to be visited in subsequent novels. The Spiritualism of the era is a fabulous backdrop to the novel.

Whispers Beyond the Veil is a top-notch historical mystery with a touch of the otherworldly. You will will fall in love with Orchard Beach and Ruby Proulx. 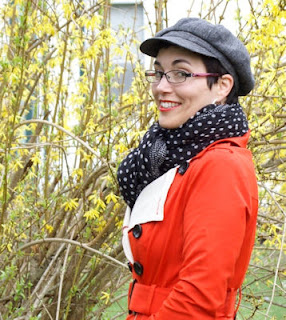 Jessica Estevao writes the Change of Fortune Mysteries.The first in the series, Whispers Beyond the Veil, will release in September 2016. She loves the beach, mysterious happenings and all things good-naturedly paranormal. While she lives for most of the year in New Hampshire with her dark and mysterious husband and exuberant children, she spends summers on the coast of Maine where she keeps an eye out for sea monsters and mermaids.

What:  One entrant will win a Trade Paperback copy of Whispers Beyond the Veil by Jessica Estevao from the publisher. US ONLY

Who and When:  The contest is open to all humans on the planet earth with a US mailing address. Contest ends at 11:59 PM US Eastern Time on October 2, 2016. Void where prohibited by law. No purchase necessary. You must be 18 years old or older to enter.