Please welcome Delia James to The Qwillery. By Familiar Means, the 2nd Witch's Cat Mystery, was published on September 27th by Berkley. 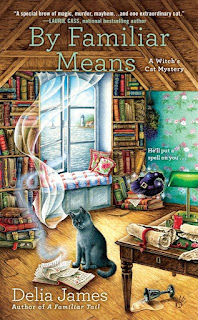 
So, it turns out cats have taken over the world.
This is not going to be news to cat owners, or to cats themselves. They just wonder why it took so long for the rest of us to notice.
I am a cat person. I grew up with cats. When I was little we had a highly independent calico named Buttercup who learned to walk without making her bell collar ring and who mercilessly teased the great dane who lived next door. Since then, I’ve shared my home with a number of felines, from my (frankly) psychopathic Siamese, to Kuzbean who loved everybody, except Isis, to our current kitty, Buffy the Vermin Slayer who is sitting by my shoulder as I type this up.
Every last one of them has known their exact position at the center of the universe, and every last one of them has made sure that it was remembered.
So, it shouldn’t come as a surprise to anybody that I drew heavily on my personal cat experiences, as well as the cats owned by friends and family to create the character of Alistair for the Witch’s Cat mysteries. For instance, Colonel Kitty, the black, three-legged cat owned by Frank Hawthorne, is the namesake of a cat owned by good friends of mine, who was able to climb trees, fences, chairs faster than most four-legged cats. Miss Bootsie, the cat at the Harbor’s Rest hotel, may or may not be related to any number of cats I’ve met in bookstores and bed and breakfasts.
Alistair, however, is his own particular self. Big, sassy, convinced (and rightly so) of his own intelligence. But loving and loyal. When he feels like it.
One of the reasons I enjoy writing the witch’s cat mysteries so much is the relationship between Anna and Alistair. They are such a great team, and Alistair’s personality just leapt off the page as soon as I began to write him. Like his human friends, Alistair has more abilities than average, and maybe an extra helping of smarts (although my own cats would argue this point). Despite this, I’ve tried to keep him one hundred percent cat. For instance, He sits on everything; papers, laundry, open books, toes that aren’t moving fast enough. The state of his food bowl is of constant and intense importance to him, especially if it is not full, or is full of the wrong thing. This last is borrowed straight from a trick of Buffy’s of standing at the bottom of the stairs to our room and meowing, loudly, at five in the morning, because we haven’t gotten up quickly enough (For the record, I am not exaggerating about the five in the morning part).
Frustration. Exasperation. Confusion. Laughter. A little strange fame, or maybe infamy. Magic. The kind of love that you would not choose to live without. That is what it is to be a cat owner, and that’s what I want to pour into the pages of the Witch’s Cat books. 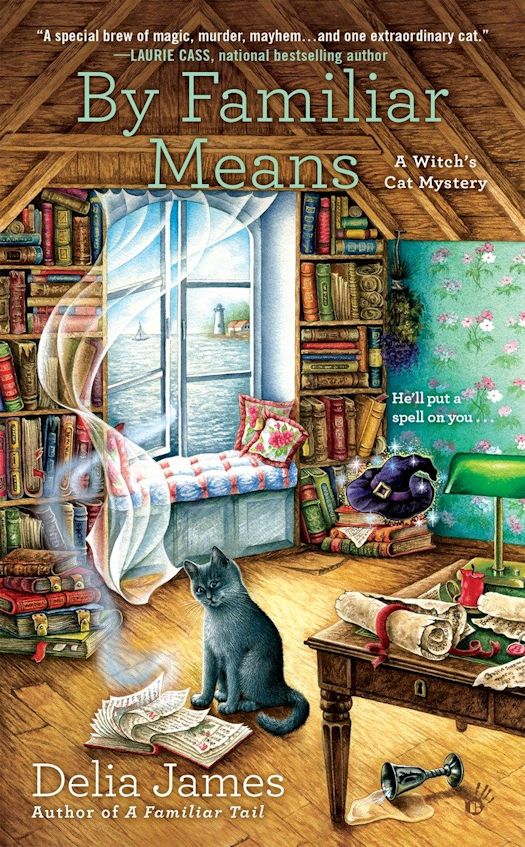 In the latest from the author of A Familiar Tail, a witch and her familiar find trouble brewing at a coffee house.

After discovering her mystical heritage—and being adopted by furry feline familiar Alistair—artist Annabelle Britton has decided to make picturesque Portsmouth, New Hampshire, her new home. Now, she can take the time to figure out her new abilities and welcome her grandmother, who is visiting Portsmouth, and her old coven, for the first time in thirty years.

But being a witch doesn’t magically put money in the bank. When she’s hired to paint the murals for a new coffee house, it seems like a wish come true. But then a series of spooky sounds and strange happenings convince the owners that their new shop is haunted. They want Anna and her coven to evict the restless spirit before the grand opening.

Annabelle is certain the haunted happenings at the shop are just hocus pocus. But when her search reveals hidden smugglers’ tunnels beneath the shop—and a dead body—Annabelle, Alastair, and the coven suddenly find themselves in a cat and mouse game with a killer…

By Familiar Means in the second installment in Delia James' Witch's Cat Mystery series. The story follows Annabelle Britton, who has recently discovered that she is an honest-to-goodness witch, as she navigates her magical studies and new life in Portsmouth, New Hampshire. While training with local witches to hone her latent skills and entertaining her eccentric grandmother, from whom Annabelle has inherited her magical powers, she also manages to stumble upon a body and finds herself investigating the murder to help her new friends.

This book builds upon the solid foundation that was laid in the first book of this series. The author expands the depth of recurring characters and draws more color into the locals, both magical and mundane. As with the first novel, Alistair, Annabelle's feline familiar is featured heavily and is given a delightful personality. The mystery moves nicely and is given a very satisfying ending. I look forward to seeing what Annabelle, Alistair, and her magical crew get mixed up in next. 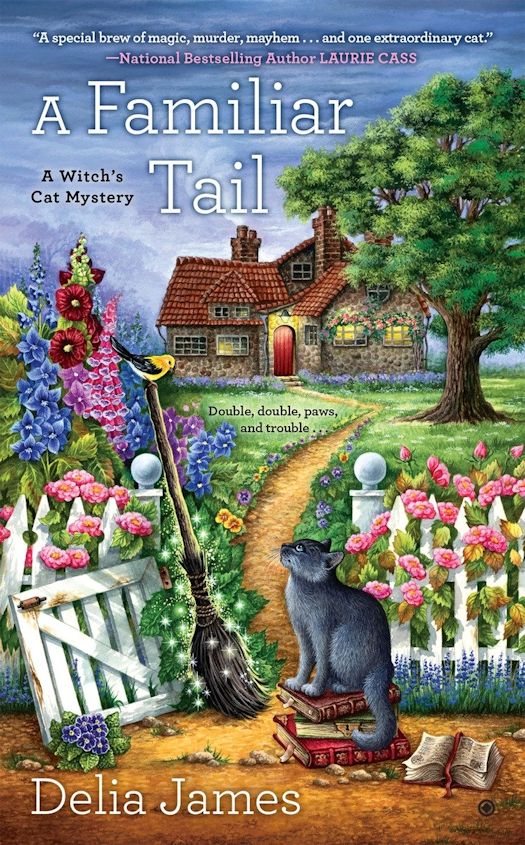 Unlucky-in-love artist Annabelle Britton decides that a visit to the seaside town of  Portsmouth, New Hampshire, is the perfect way to get over her problems. But when she stumbles upon a smoky gray cat named Alastair, and follows him into a charming cottage, Annabelle finds herself in a whole spellbook full of trouble.

Suddenly saddled with a witch’s wand and a furry familiar, Annabelle soon meets a friendly group of women who use their spells, charms, and potions to keep the people of Portsmouth safe. But despite their gifts, the witches can’t prevent every wicked deed in town….

Soon, the mystery surrounding Alistair’s former owner, who died under unusual circumstances, grows when another local turns up dead. Armed with magic, friends, and the charmed cat who adopted her more than the other way around, Annabelle sets out to paw through the evidence and uncover a killer.

Born in California and raised in Michigan, Delia James writes her tales of magic, cats, and mystery from her hundred-year-old bungalow home. She is the author of the Witch’s Cat mysteries, which began with A Familiar Tail. When not writing, she hikes, swims, gardens, cooks, reads, and raises her rapidly growing son.

What:  One entrant will win a Mass Market Paperback copy of By Familiar Means by Delia James from the publisher. US ONLY

Who and When:  The contest is open to all humans on the planet earth with a US mailing address. Contest ends at 11:59 PM US Eastern Time on October 7, 2016. Void where prohibited by law. No purchase necessary. You must be 18 years old or older to enter.