Please welcome Michael J. Martinez to The Qwillery writing about his new series: MAJESTIC-12. The first novel in this series, MJ-12: Inception, was published on September 6th by Night Shade Books. 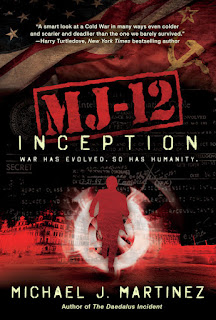 
I won’t kid you. Starting a brand new series is daunting.

I started writing the book that became The Daedalus Incident in 2010, and I had worldbuilding notes on it dating from 2003. The book came out in 2013, with The Enceladus Crisis in 2014 and The Venusian Gambit last year.

Basically, I spent at least six years with these characters, and well over a decade with the whole notion of Napoleonic era sailing ships in space. That’s a long time to get comfortable with something, and I think if you read all three books, you’ll see me get better as a writer and storyteller as you go.

And now for something completely different.

I certainly could’ve told more Daedalus stories; there are large gaps in the timeline that could’ve been fun to fill in. Maybe I’ll go back and do that someday. But it struck me that it was time to try a new thing, to stretch writerly muscles that hadn’t been used much when writing Daedalus and the others.

I wanted to do something darker and more nuanced, and my teenaged love of spy thrillers kept popping into my head. It was time to give it a whirl. The MAJESTIC-12 series is the result, starting with MJ-12: Inception, out this week in hardcover.

The trick here, of course, was to try to make something that really was different. It couldn’t be the same swashbuckling adventure as the Daedalus series. The characters in MJ-12: Inception shouldn’t be papered-over characters from the other books. I was really conscious of trying to differentiate, and that’s the daunting part. I didn’t want to be formulaic.

If you’ve read Dan Brown, you’ll know what I mean. If you look at the plots of The Da Vinci Code and Deception Point, you’ll find some really striking similarities – a code to crack, a shadowy conspiracy, a mentor-figure that switches sides at the last minute, global repercussions. Honestly, and with all due respect to Dan and his success, I found the similarities in plot beats striking.

But you could say the same thing about many authors – there’s a formula to what they do, and it works. More power to ‘em. I wanted to be different.

That meant building MAJESTIC-12 from the ground up, with a variety of different and nuanced characters, with a different pace and different plot devices. To me, the only real similarities between Daedalus and MJ-12: Inception is that they’re both historical fantasy, they both mash-up a variety of genres, and I wrote ‘em.

I learned a lot writing the Daedalus books, and I’m hopeful that the learning has translated well into the MAJESTIC-12 series. I’m already as comfortable with these characters and this setting as I ever was with those in the Daedalus series, which I consider a plus. They feel right.

I feel like if I’m going to start a new series, then for better or worse, it’s going to be a very different thing, even if it means more work for me, and more risk as well. As my alleged career progresses, I may find I have a firmer footing in certain genres or subgenres, or a facility with certain tropes or themes more than others. But I’m still finding out. And as I do…thanks for coming along for the ride. 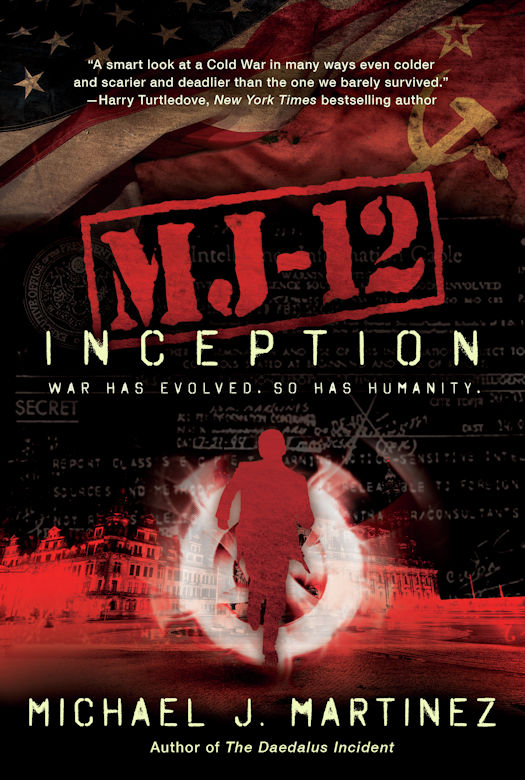 It is a new world, stunned by the horrors that linger in the aftermath of total war. The United States and Soviet Union are squaring off in a different kind of conflict, one that’s fought in the shadows, where there are whispers of strange and mysterious developments. . .

Normal people across the United States have inexplicably gained paranormal abilities. A factory worker can heal the sick and injured. A schoolteacher bends emotions to her will. A car salesman alters matter with a simple touch. A former soldier speaks to the dying and gains their memories as they pass on.

They are the Variants, controlled by a secret government program called MAJESTIC-12 to open a new front in the Cold War.

From the deserts of Nevada to the palaces of Istanbul, the halls of power in Washington to the dark, oppressive streets of Prague, the Variants are thrown into a deadly game of shifting alliances. Amidst the seedy underbelly of nations, these once-ordinary Americans dropped in extraordinary circumstances will struggle to come to terms with their abilities as they fight to carve out a place for themselves in a world that may ultimately turn against them.

And as the MAJESTIC-12 program will soon discover, there are others out there like them, some with far more malevolent goals. . .

MJ-12: Inception is the first novel in an early Atomic Age, paranormal spy series by Michael J. Martinez, author of the Daedalus series. It opens with a devastating post WWII situation during a routine night patrol in the American sector of Berlin. Only Lieutenant Frank Lodge survives the ambush, but he emerges changed. A few months later in Hiroshima, U.S. Navy Lt. Danny Wallace investigates an anomaly given top secret priority. In the tunnels below the wreckage of a hospital, Wallace discovers a phenomenon of intense white light thought to have a connection with the detonation of the A-bomb. This light is believed by an elite few to be linked to the changes experienced by several unsuspecting Americans. U.S. officials call these people Variants; normal people who have been spontaneously endowed with unique abilities that they are not sure how to control and don't fully understand. President Harry S. Truman green lights a highly classified agenda designed to contain, control, and possibly exploit these metahumans' abilities and, in doing so, Operation Majestic Twelve is born.

The main characters in this story are feared because they possess paranormal powers. It's all too easy to believe that our government would go to great lengths to keep their existence a secret. It's also conceivable that they would immediately try to use them as spies. Martinez brilliantly introduces the U.S. government's first paranormal team, Frank, Cal, Ellis, and Maggie, by revealing their bios via confidential reports, and by narrating in the POVs of the Variants themselves. The story follows them through their military quarantine and training, as they learn to control their abilities and work as a unit. I was fascinated by the psychological impact that becoming a metahuman under the government's influence had on each of the Variants.

Martinez also takes the time to detail some of the social injustices experienced by his diverse cast of characters in this Cold War era tale. I was outraged for Cal, the African American factory worker who is definitely my favorite character. His interactions with the bigoted Ellis alternately made me uncomfortable and frustrated by the lack of justice in the world. Through it all, Cal maintains his compassionate nature and I never stopped rooting for him. Maggie, the school teacher who can manipulate people's emotions, is the most terrifying. Her lack of deep emotional commitment or connection to anyone makes her truly scary. Martinez achieves a perfect balance of delving just deep enough into each character to give the reader a detailed understanding while still leaving a tantalizing amount of information open for exploration in future novels in the MAJESTIC-12 series.

Martinez is truly a gifted writer in that MJ:12 Inception has a distinct and utterly different flavor than his previous series. Although I only know about organizations like the CIA from books, movies and literature, his portrayal of the inner workings of government programs seems authentic. I enjoyed reading the confidential reports written from the perspective of top officials in the CIA. Martinez, a master at genre blending, has created an exciting new series by mixing a pinch of James Bond to a dash of the X-Men and then combining that with a dose of politics and old-fashioned cloak and dagger espionage.

With MJ-12 Inception, Martinez weaves an intense tale of patriotism, Cold War politics, the U.S. spy network, and the nuances of human relationships which I simply couldn't put down.

I’m a husband, father and writer living the dream in the Garden State. I’ve spent nearly 20 years as a professional writer and journalist, including stints at The Associated Press and ABCNEWS.com. After telling other people’s stories for the bulk of my career, I’m happy that I can now be telling a few of my own creation. I’m a member of the Science Fiction & Fantasy Writers of America and International Thriller Writers.

When not being a husband, parent or writer, I enjoy beer and homebrewing, cooking and eating, the outdoors and travel. If you’re curious about our travels,  my wife does a far better job of describing our adventures, so check out her blog at katrinawoznicki.com.