Solar Express by L. E. Modesitt, Jr. is out today from Tor Books.  Solar Express has been selected as one of Amazon's best books of November!  You may read an excerpt here. 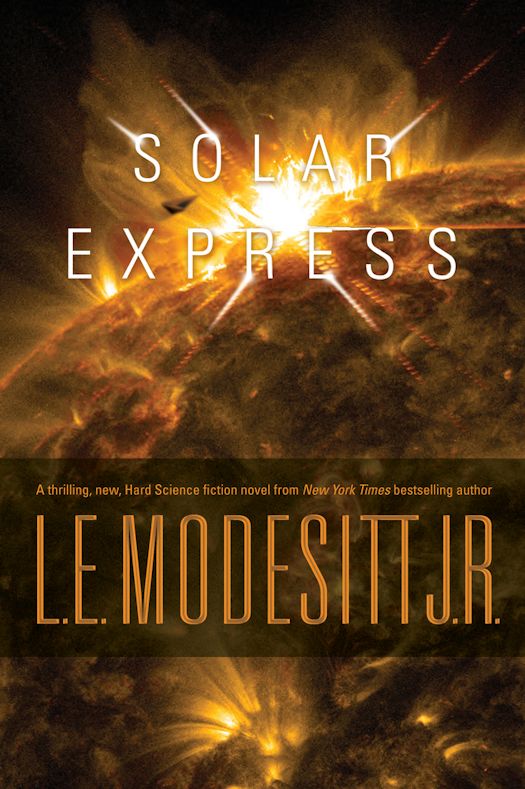 You can't militarize space. This one rule has led to decades of peaceful development of space programs worldwide. However, increasing resource scarcity and a changing climate on Earth's surface is causing some interested parties to militarize, namely India, the North American Union, and the Sinese Federation.

The discovery of a strange artifact by Dr. Alayna Wong precipitates a crisis. What appears to be a hitherto undiscovered comet is soon revealed to be an alien structure on a cometary trajectory toward the sun. Now there is a race between countries to see who can study and control the artifact dubbed the "Solar Express" before it perhaps destroys itself.

Leading the way for the North American Union is Alayna's friend, Captain Christopher Tavoian, one of the first shuttle pilots to be trained for combat in space. But, as the alien craft gets closer to its destination, it begins to alter the surface of the sun in strange new ways, ways that could lead Alayna to revolutionary discoveries-provided Chris can prevent war from breaking out as he navigates among the escalating tensions between nations.

L. E. Modesitt, Jr., is the bestselling author of the fantasy series The Saga of Recluce, Corean Chronicles, and the Imager Portfolio. His science fiction includes Adiamante, the Ecolitan novels, the Forever Hero Trilogy, and Archform: Beauty. Besides a writer, Modesitt has been a U.S. Navy pilot, a director of research for a political campaign, legislative assistant and staff director for a U.S. Congressman, Director of Legislation and Congressional Relations for the U.S. Environmental Protection Agency, a consultant on environmental, regulatory, and communications issues, and a college lecturer. He lives in Cedar City, Utah.