Interview with Paul Meloy, author of The Night Clock Paul:  I’m delighted to be here. Thanks for inviting me. I started writing fiction as a child, on an old manual typewriter my dad brought home from work along with a ream of thin yellow packing paper. The typewriter was as heavy as a car engine and smelt of ink and oil and I fell in love with it. I was an only child, and also a rather insular, introverted one, and I spent much of my time alone. I was also a voracious reader. This might sound a bit tragic, but I wanted to have adventures with friends of my own, so I started writing stories – and the odd epic poem – which consumed me and let me get lost in another, less restrictive world.

Paul:  Foursquare pantser. I start with characters, the sketch of a scene, a POV and go from there. I have ideas about where some things might go, or a scene I know needs to be later, or perhaps climactic, but I never plot. It interferes with the organic structure of the story, which could effectively go anywhere. If I can surprise myself then I guess I’m surprising anyone else who reads it. I trust the process entirely.

Paul:  Waiting for the process to happen. It can lead to long periods of inactivity but the end result, the subconscious epiphany, is always so much more satisfying than trying to force a scene. I doubt I’ll ever make a living at this. I’d have to sack myself.

Paul:  The first adult book I read was The Rats. I’d never read horror before but I was about twelve (the same age as my son is now, and he watches The Walking Dead and reads Stephen King) and the experience was secretive and very thrilling, definitely coming-of-age stuff. I had my first erotic experience a year or so later with the girl next door and a copy of The Fog, but I can’t talk about that. The scene where the rats attack the school is probably the scene that made me decide, that’s it, I want to be a writer. It can still be read out of context of the rest of the book and have the same effect on me. Again, it was one of those perfect moments that caused doors to open and servers to click over in my mind at just the right age and time of development. Later came Masterton, King, Bradbury, Barker, Iain Banks, Ramsey Campbell et al. All big hitters with unique, inspiring voices. These I read for entertainment, for involvement and distraction, but I have to say the one writer that did that thing, made the transition from author behind the page to personal inspiration and hero status, was Harlan Ellison. Not only were his stories unlike anything I had ever read before, his voice spoke directly to the angry and confused boy I was and the writer I wanted to become. He showed me how it should be done, and the attitude to have when doing it.

TQ:  Describe The Night Clock in 140 characters or less.

Paul:  A psychiatric nurse has a shitty day. His patients are killing themselves. He meets a mysterious man who tells him he’s part of a bigger picture. They fight monsters.

TQ:  Tell us something about The Night Clock that is not found in the book description.

Paul:  It’s hard to write a synopsis in 140 words or less. That isn’t crap. Not sure I’ve met the remit. Also, what you don’t realise is that most of the characters appear in other stories I’ve written over the years, so they all have their own back stories which can be read to enhance the experience of the novel. It’s not necessary, but I hope it might be rewarding and fun to track them down.

TQ:  What inspired you to write The Night Clock? What appeals to you about writing horror?

Paul:  Having written about all these characters set in the world of The Quays, Autoscopes and Firmament Surgeons, Gantries and Toyceivers, over about twenty years, I always had the idea of pulling it all together and having them meet in a kind of epic battle. I started The Night Clock with a novella in mind, but I strapped a pair on and went novel-side. I like writing horror because it can be shocking, exciting, surreal and can generate scenes that stay in the reader’s mind. I try to write with care, and I don’t like anything cruel or sadistic, or transgressive for the sake of it.

TQ:  What sort of research did you do for The Night Clock?

Paul:  I read up on steam trains, hay-balers, community support officer training and glass blowing. No spoilers there, I hope.

Paul:  I loved writing about Rob. There’s something about him I recognise in myself, even more so than the main character, Phil Trevena, who is, like me, a psychiatric nurse in his late forties with the odd inner conflict. I think they are the two sides of me. The one who is hanging on, trying to be decent, and the one who’s gone, fuck it, I don’t care any more. Where’s the economy cider?

The most difficult character is Daniel. Not because he is less easy to develop than the others, but because his struggle is so real, and he is a very damaged man, and I really wanted to get that right without any sentimentality.

TQ:  Which question about The Night Clock do you wish someone would ask? Ask it and answer it!

Paul:  Would you like to sell the film rights, Paul? Yes, please, Mr. Del Toro.

TQ:  Give us one or two of your favorite non-spoilery lines/paragraphs from The Night Clock.

Gollick had had a sister, Rob remembered. Barbara Gollick. She was a year below them at school but she was a big girl. Well, fat really. And very moley. Molier than Duncton Wood, to be perfectly honest. She wasn’t unpleasant at all, in fact she was quite a cheery thing and she used to hang about outside their prefabricated classroom at the top of the playground during breaks so she could spend time with her brother. She mortified Gollick by her very existence but he’d try and be nice to her. Unfortunately, with their innate abhorrence of lack of appeal in other children, their tyrannous misgivings towards any blemishes, pongs or impediments, the rest of the children – Rob included – found themselves bullying the poor girl. It was like they couldn’t help it. And of course, Gollick got it in the neck, too, just for being her brother, and when he tried to defend her, well, he was finished, really. Rob’s shoulders slumped at the memory of things he’d said, and heard said. Old moley, and fat old moley. Inspired combinations like that.


Dr Natus was removed from his mother’s teratogenic womb on the sixteenth of February 1953. He told Daniel this the night he found him in the back of the cupboard. He told Daniel his father was Berlyn Brixner, head photographer for the Trinity test, the first nuclear weapons test of an atomic bomb. Brixner had shown his mother a photograph of the first 0.016 seconds of the explosion, as the light bubble had inflated across the desert, and she had fallen immediately pregnant.

Paul:  I’ve nearly finished the sequel to Night Clock. It’s called The Adornments of the Storm. I’m having another adventure with some old friends. I think it’s darker and more complex than Night Clock, but it’s still fun, I hope.

Paul:  Thanks for having me. 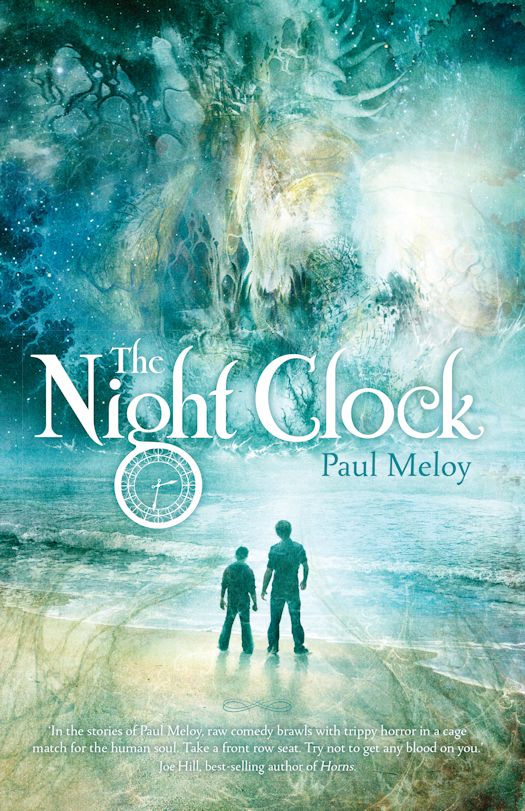 An incredible debut novel that will move and terrify you, as reality itself is threatened by a world just beyond our own.

And still the Night Clock ticks...

Phil Trevena’s boss is an idiot, his daughter is running wild, and his patients are killing themselves. There is something terrible growing in Phil that even his years as a mental health worker can’t explain - until he meets the enigmatic Daniel, and learns of the war for the minds of humanity that rages in Dark Time, the space between reality and nightmares measured by the Night Clock.

Drawn into the conflict, Phil and Daniel encounter the Firmament Surgeons, a brave and strange band that are all that prevents the nightmarish ranks of the Autoscopes overrunning us. The enemy is fuelled by a limitless hatred that could rip our reality apart. To end the war the darkness that dwells in the shadow of the Night Clock must be defeated...

Paul Meloy’s extraordinarily rich debut novel introduces us to a world just beyond our own, shattering our preconceptions about creativity and the human mind, and presenting us with a novel like no other.

Paul Meloy was born in 1966 in South London. He is the author of Islington Crocodiles and Dogs with Their Eyes Shut, and the forthcoming collection Electric Breakfast. His work has been published in Black Static, Interzone and a variety of award winning anthologies. He lives in Devon with his family.