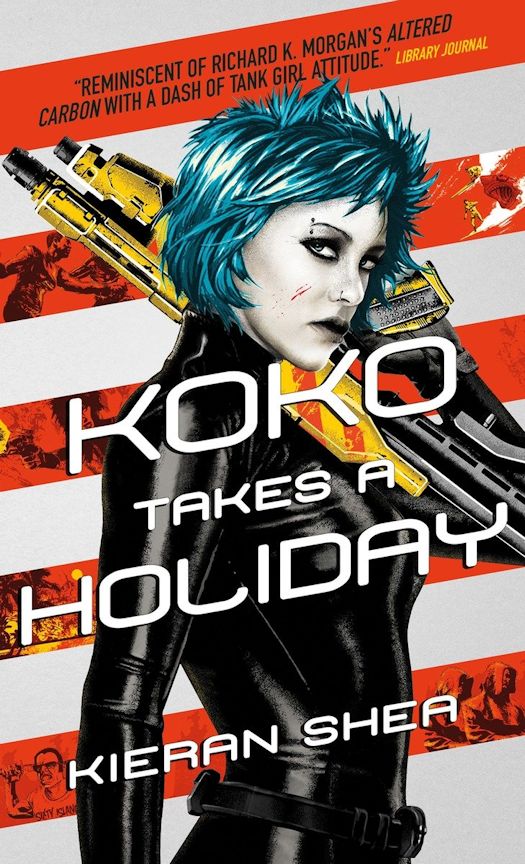 Five centuries from now, life as we know it has drastically changed. Wealthy vacationers looking to indulge in fantasies or fetishes can book trips to The Sixty Islands, a trendy tropical hotspot. Based on the size of their wallet, guests can experience a wide range of simulated violence, demolition, and danger, or encounters of a more personal nature.

Former mercenary Koko Martstellar owns and manages a brothel/saloon and enjoys the perks of the job; all the booze, drugs, and boy toys she can handle. That is until some unruly customers get out of line and Koko is forced to take matters into her own hands. Koko isn't worried about repercussions from the local authorities because her ex-mercenary buddy, Portia Delacompte, is now Executive Vice President of Operations on The Sixty Islands and Portia owes her, big time.

But when the SI security detail show up, they come down unexpectedly hard. Koko is surprised to discover that her friend Portia signed the order. It's even more puzzling because Portia is the one that offered her the opportunity of retiring to The Sixty in the first place. A mini war zone erupts in the bar and Koko escapes by the skin of her teeth, heading off planet to the Second Free Zone. She ends up on a mammoth residential barge with an assassin hot on her trail. Koko needs to get to the bottom of Portia's vendetta before she becomes komodo meat, and she's not afraid to destroy anything or anyone in her path.

I chose Koko Takes a Holiday for two reasons: I enjoy reading debuts and this is author Kieran Shea's first novel; and I was drawn to the kickass book cover. One look at that blue-haired badass and I thought 'I want to meet this woman', and as I read her story, I wasn't disappointed.

Shea's version of life in the future seems pretty grim, but Koko is the life of the party. She is a great lead character because what you see is what you get. Surprisingly enough, even though she's a hardened killer, Koko is quite likeable.

Shea's style of writing left little room for any slow spots. It was wham, bam from start to finish. I enjoyed the settings, ranging from the steamy decadence of The Sixty Islands to the more gritty and grim confines of the residential barge Alaungpaya.

Koko Takes a Holiday is a simple story, told with great panache. This book is not for the weak of stomach as it is full of graphic gore, dismemberment, and other assorted atrocities. I love its boldly irreverent, in-your-face style; it's a wild ride that I would recommend to anyone looking for a good time.