Review: The Death of Dulgath by Michael J. Sullivan 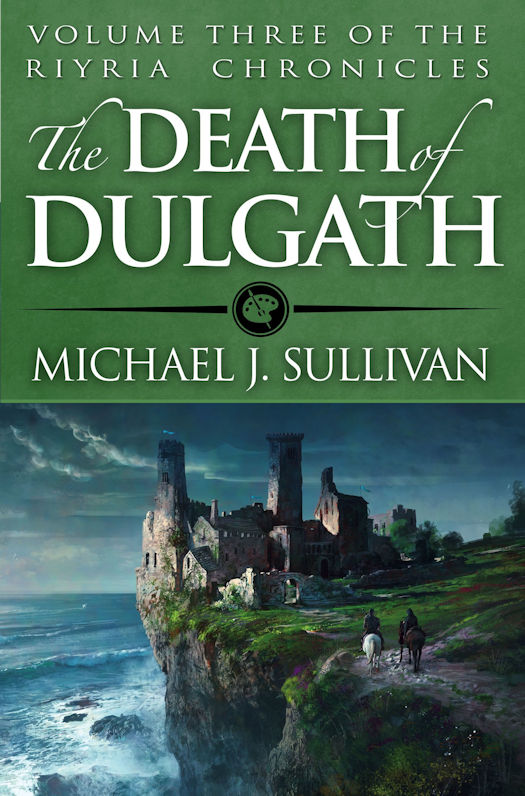 Three times they tried to kill her. Then a professional was hired. So was Riyria.

When the last member of the oldest noble family in Avryn is targeted for assassination, Riyria's Royce and Hadrian are hired to foil the plot. Three years have passed since Hadrian, the war-weary mercenary, and Royce, the cynical ex-assassin, joined forces to become rogues-for-hire. All has gone well until they're asked to help prevent a murder. Now they must venture into an ancient corner of the world to save a mysterious woman who knows more about Royce than is safe and cares less about herself than is sane.

From the best-selling author of The Riyria Revelations comes the third installment of The Riyria Chronicles. Although part of a series, it's designed to thrill both new readers looking for fun, fast-paced fantasy and Riyria veterans wishing to reunite with old friends.

The Death of Dulgath is the product of Michael J, Sullivan’s active imagination, his obvious love of both the Riyria world and its characters and a very successful Kickstarter campaign. Without these factors we might not have had opportunity to enjoy another excellent adventure of our two favourite characters - Royce and Hadrian.

This novel is set in between The Rose and the Thorn and Theft of Swords where the Riyria have only been together for a few years and just starting to establish their reputation. In need of some cash they accept a job on the opposite side of the kingdom to try to prevent a young woman from getting murdered. It sounded like a quick and easy assignment involving no mystery, no intrigue and no death or mayhem. Sound like something that should go to plan? Unfortunately for the Riyria this quick and easy job turns out to a little more than they expected. Idyllic countryside, happy citizens who love their Lady and a kind and benevolent ruler? If it sounds too good to be true then usually someone is determined it doesn't stay that way. Enter Royce and Hadrian who need to use both their combined and individual skills to find out who wants the Lady dead and why. Its what they find out about each other however that is what makes this story such an excellent read.

I was extremely lucky to have been selected as part of the beta reader group for The Death of Dulgath. You may have read some of my other reviews of Sullivan's books and know that I love just about everything about this series and its two main characters. This instalment in the series was no exception. Sullivan continues to develop both of his main characters with POV chapters where we gain a better insight into how they feel about each other which is really interesting and gives both them and the story more depth. Sullivan also gives us some additional background into a new region of the kingdom, of the religious beliefs of the citizens of Dulgath and what the Church of Novron is planning. The plot largely focuses on Lady Dulgath who features not just as the intended victim of the murder plot but as the subject of the artist Sherwood, who has been commissioned to paint her portrait. Sullivan uses Sherwood's POV chapters and the painting as a tool to advance the plot, as well as, the mechanism for revealing one of the story's big mysteries. Lady Dulgath is an enigmatic character and has some interesting scenes with Royce where she reveals some home truths about who (or what) he really is. Royce is drawn to the Lady as he is intrigued by what she tells him. I apologise for sounding vague but I can't reveal too much as I don't want to spoil the story for you.

Fans of this series, will enjoy the chapters dedicated to Royce and Hadrian. As with the other books in the series it is in the scenes with Royce and Hadrian that Sullivan's writing really shines and these were my favourite parts of the novel. Royce and Hadrian's POV chapters give us a better insight into how they feel about each other and we get an inside view of how their relationship continues to grow and flourish.

This is another great book by Sullivan and another star in the Riyria collection and a must read for any fantasy fan. Although you can easily enjoy The Death of Dulgath as a one off I wouldn't want you to miss any of the excellent books in the series so start back with The Crown Tower.