James A. Moore on Writing Book Four in a Trilogy


Please welcome James A. Moore to The Qwillery. City of Wonders, the third and not final novel in the Seven Forges series, was published by Angry Robot Books on November 3rd. The fabulous cover illustrations for the series are by Alejandro Colucci. 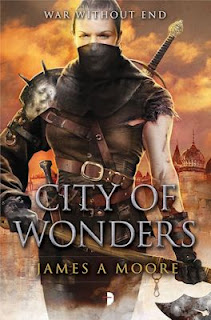 Writing Book Four in a Trilogy

Well, this is a situation, isn’t it? Book four.

It’s a little awkward. See, I thought I was going to write either a series, or a trilogy. Now I’m kind of doing both. Let me explain. When I started SEVEN FORGES. I knew what I wanted to do with the series, but I ran across a few problems. First, because of the nature of the business, I proposed a trilogy, fully expecting that I could A) Build a world, B) populate that world and give it a viable history and C) make drastic changes to the texture of that world within a certain parameter. I figured I could do everything I needed to do in 250,000 words or less. That sounds like a lot of words and it IS a lot of words, but, really, I forgot that I can be hideously wordy when I want to. (I normally want to.)
I didn’t consider that I would get a two book deal. More explaining here. Angry Robot is wise in many ways and one of those is that they hedge their bets. Want to do a trilogy? Cool. Let’s give you two books to start with. If it’s going well we can add more later. That, folks, is common sense in this business. The publishing field is constantly changing right now. I find that both exhilarating and terrifying. I love change! I love when things are shaken up a bit and the newer, better ways of doing business show up. I also hate when the changes that are happening could affect my ability to pay my bills every month. See my dilemma? The challenge for me is that Angry Robot was taking a gigantic chance on me. See, I’m a writer, and I’ve got around 25 novels under my belt plus enough novel length works to round me up to around thirty. I have been at this for a while.
And in all of that time, I wrote exactly one fantasy short story. One short story. That means I have absolutely no track record in the eyes of publishing. I might as well have decided to write a romance for all my previous credits meant. My numbers as a horror writer have almost no reflection on what my sales might do in any other genre. So for all intents and purposes, Angry Robot was taking a huge leap of faith with me.
So I set out to write the best books I could and didn’t really think about the length of the works or what the end of the take would be and I got myself going full steam (give or take a few derailments for the real world) and I wrote SEVEN FORGES and THE BLASTED LANDS and went on to work on other projects. And While I was working on other projects the story started changing. Every time I turned around there was more that I wanted to add into that third book. The world I was building sort of suffered from the snowball effect. The more it rolled along, the more snow it gathered in the form of new characters, conflicts and locations.
Happily, the changes are all for the better in my eyes. The story took on a life of its own and that is a good thing in my eyes. Even better, Angry Robot decided to keep taking chances and let me expand the world I was building.
The end result is this: I just had book three of the trilogy come out. I’m writing book four right now.
When I’m done with that book I have another series ready to go. That is to say, Angry Robot likes the ideas and they’re willing to take another chance with me. It’ll be another trilogy. After that, we’ve been talking about doing a few more books in the SEVEN FORGES series. There are only four novels, you see, and there are still Seven Forges.
Time will tell, but either way, I think I’m going to enjoy the ride.

All the best,
James A. Moore 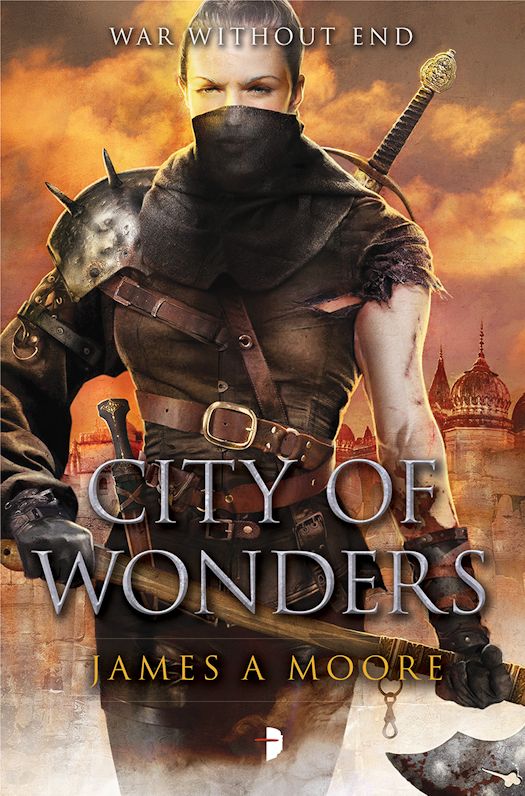 Old Canhoon, the City of Wonders, is facing a population explosion as refugees from Tyrne and Roathes alike try to escape the Sa’ba Taalor. All along the border between the Blasted Lands and the Fellein Empire, armies clash and the most powerful empire in the world is pushed back toward the old Capital. From the far east, the Pilgrim gathers an army of the faithful, heading for Old Canhoon.

In Old Canhoon itself, the imperial family struggles against enemies old and new, as the agents of their enemies begin removing threats to the gods of the Seven Forges and prepare the way for the invading armies of the Seven Kings. In the distant Taalor valley, Andover Lashk continues his quest and must make a final decision, while at the Mounds, something inhuman is awakened and set free.

War is here. Blood will flow and bodies will burn. 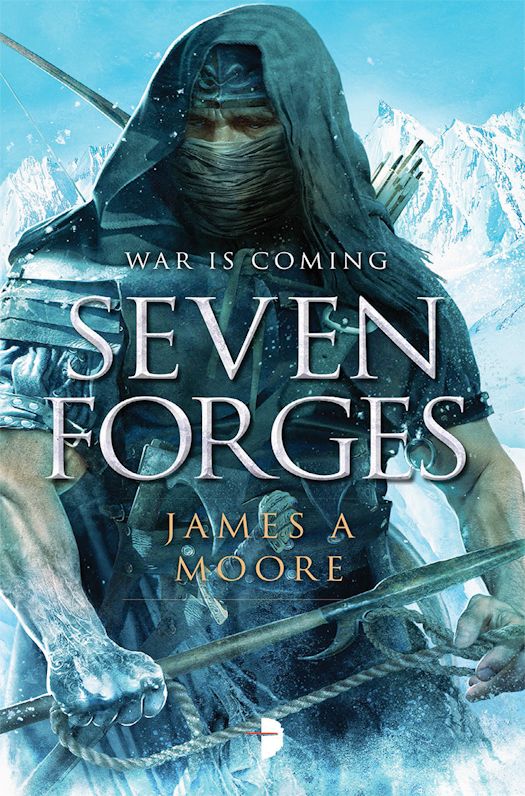 The people of Fellein have lived with legends for many centuries. To their far north, the Blasted Lands, a legacy of an ancient time of cataclysm, are vast, desolate and impassable, but that doesn’t stop the occasional expedition into their fringes in search of any trace of the ancients who once lived there… and oft-rumoured riches.

Captain Merros Dulver is the first in many lifetimes to find a path beyond the great mountains known as the Seven Forges and encounter, at last, the half‐forgotten race who live there. And it would appear that they were expecting him.

As he returns home, bringing an entourage of the strangers with him, he starts to wonder whether his discovery has been such a good thing. For the gods of this lost race are the gods of war, and their memories of that far-off cataclysm have not faded. 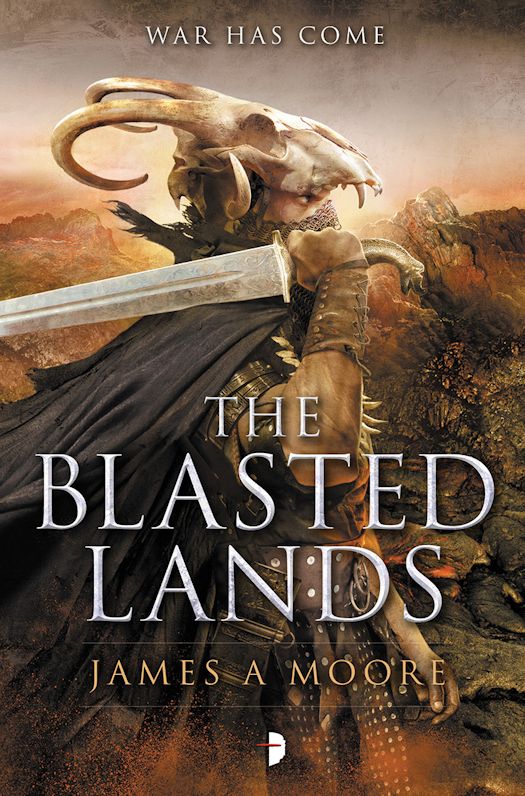 The Empire of Fellein is in mourning. The Emperor is dead, and the armies of the empire have grown soft. Merros Dulver, their newly-appointed – and somewhat reluctant – commander, has been tasked with preparing them to fight the most savage enemy the world has yet seen.

Meanwhile, a perpetual storm ravages the Blasted Lands, and a new threat is about to arise – the Broken are coming, and with them only Death.


[cover to be revealed]

The City of Wonders has been saved by nearly miraculous forces and the Silent Army is risen, ready to defend the Fellein Empire and Empress Nachia at any cost.

The power that was hidden in the Mounds is on the move, seeking a final confrontation with the very entities that kept it locked away since the Cataclysm. Andover Lashk has finally come to accept his destiny and prepares to journey back to Fellein. The Sa’ba Taalor continue their domination over each country and people they encounter, but the final conflict is coming: The Great Wave of the Sa’ba Taalor stands to destroy an empire and the Silent Army prepares to stop them in their tracks.
Caught in the middle is the Fellein Empire and the people who have gathered together on the final battlefield. The faithful and the godless, the soldiers and killers alike all stand or fall as old gods and new bring their war to a world-changing end.

Some struggles are eternal. Some conflicts never cease. The Gods of War are here and they are determined to win.

James A Moore is the author of over twenty novels, including the critically acclaimed Fireworks, Under The Overtree, Blood Red, Deeper, the Serenity Falls trilogy (featuring his recurring anti-hero, Jonathan Crowley) and his most recent novels Alien, Sea of Sorrows as well as Seven Forges series: Seven Forges, The Blasted Lands, City of Wonders and the forthcoming sequel The Silent Army.

He has twice been nominated for the Bram Stoker Award and spent three years as an officer in the Horror Writers Association, first as Secretary and later as Vice President.

James cut his teeth in the industry writing for Marvel Comics and authoring over twenty role-playing supplements for White Wolf Games, including Berlin by Night, Land of 1,000,000 Dreams and The Get of Fenris tribe. He also penned the White Wolf novels Vampire: House of Secrets and Werewolf: Hellstorm.