Being a huge Lord of the Ring's fan, I am always excited to visit Weta Workshop's booth at NYCC and 2015 was no exception. This year was even more thrilling because I was able to spend quality time getting to know a few of their talented, behind-the-scenes people. Take Warren Dion-Smith; Warren is an acclaimed hair and makeup artist, working on such films as The Hobbit trilogy, Man of Steel, King Kong and The Amazing Spider-Man 2. At NYCC, fans of Middle Earth had the opportunity to have Elf or Hobbit ears applied by the artist himself. I really enjoyed my time spent with Warren and the ears even impressed, John Rhys Davies, LOTR's Gimli, with whom I had a photo op later in the day. Fans could also watch Warren perform make-up magic as he transformed ordinary men into dwarves or warriors.


Daniel Falconer was also manning the Weta booth. Multi-talented, Daniel is both a designer and writer at Weta Workshop. He is best known for working on conceptual design for The Lord of the Rings trilogy, Avatar, and The Hobbit trilogy. He has written books such as The Art of District 9, The Hobbit: An Unexpected Journey: Chronicles: Art and Design, Smaug: Unleashing the Dragon and the most recent, The Hobbit: The Battle of the Five Armies: Chronicles: The Art of War. When I visited, Daniel was busy signing books, Hobbiton maps (note the personalization in the bottom right hand corner of the map) and interacting with fans.


I was fortunate enough to strike up a conversation with Isaac (Ike) Hamon who works both in the stunt and motion capture departments for Weta. Ike was gracious enough to grant me an interview (see below) and give me a tour of the Weta booth. Although, I begged, he couldn't give me too many details about the Krampus movie that is set to hit U.S. theaters December 4th, but he did tell us a bit about himself, the motion capture process, his most memorable film moments, and spoke about Weta's upcoming projects. Ike is a fantastic emissary for Weta because he is passionate about his work and his enthusiasm is contagious. 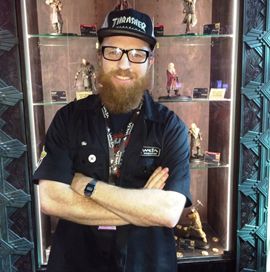 Weta's booth was one of my favorite things about NYCC 2015. It was staffed by friendly, knowledgeable and gifted people and I hope to be fortunate enough to visit them again next year.