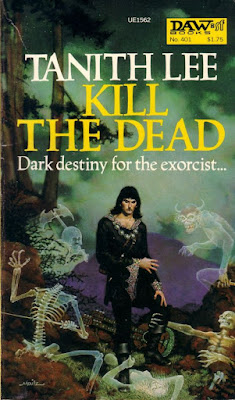 Tanith Lee (19 September 1947 – 24 May 2015) lived in England. Her parents were both dancers and they moved around a lot. She dropped out of college and held several different jobs. In 1971, she published her first novel The Dragon Hoard. By 1975, she was able to write full time. In 1980, she was the first woman to win the British Fantasy Award for the novel Death's Master. She wrote 90 novels and 300 short stories.

Out of the dusk he comes striding, the stranger, the man in black, inevitable as death itself: Parl Dro—Ghost Slayer.

Some have bought his services for gold, and some have blessed him for his work. But not everyone welcomes an exorcist who will remorselessly deprive them of their beloved dead.

Dro began his vocation at an early age. And now he will not be turned aside, no matter how you may threaten, curse or weep. He is seeking too the greatest stronghold of the deadalive: Ghyste Mortua, the ghost town in the mountains, and he means to destroy it.

If he will face that, what use the pleas of the desperate sisters, Cilny and Ciddey, what use the rage of Myal, with his genius for music and his imperfect talent for crime?

Only one thing, it seems, motivates Parl Dro.

His determination to kill the dead.

"Tanith Lee is one of the most powerful and intelligent writers in fantasy." —Publishers Weekly

"With Lee… expect the unexpected." —Starburst

While browsing my local used bookstore I came across this beauty. I saw the title and immediately fell in love with it. Once I pulled it off the shelf and saw the cover I knew this would be a good book. It just screams classy retro, the double necked guitar at the feet of a man who could be a hero or late seventies rock star. The ghosts on the cover were amazing, a skeleton without a head, a naked lady ghost and the goblin ghost that appears to have a real brain floating in his ghost skull. The triple threat was the awesome back cover description.

Kill the Dead is so much more than I expected. I was thinking it would be a Conan-esq character but fighting ghosts with maybe some cheesy horror or fantasy cliches. Instead, it was the perfect blend of fantasy and horror. When I think of Gothic, this is what comes to mind. It was very much a mood read. Each sentence seemed to be written to evoke foreboding doom. I loved every minute of it.

Parl Dro is the dark mysterious hero hunting and destroying ghosts. He's a man on a mission to find and destroy Ghyste Mortua, an entire town of ghosts. Along the way, he discovers a small village with a decrepit home with two sisters in it. However, one sister is a ghost. Parl does what a ghost killer does, which causes the other sister to vow revenge on Parl. At the same time, a minstrel down on his luck crosses paths with both the vengeful sister and Parl. The three of them find themselves at odds throughout most of the book.

Tanith Lee does an amazing job of introducing each of the characters and slowly but steadily unveiling their backstory as well as their true motivations. The care and timing of the character reveals is something I feel we are missing in today's stories. Things seem to move much faster now, which isn't a good or bad thing, but I do enjoy a slow build up when done right and Lee does it right. Each of the characters add to the mood of unease, as none of them are truly good or evil. They each have multiple layers to them, which ache with reality. It adds to the tone of the overall story, this sense of something being slightly off.

Lee's world blends well with the characters and mood of the tale. It's worn out and in ruin. I don't think there’s anything new or shiny in this world. It has a dull tone and color palette. Even the ivory white bones inlaid in Myal's double necked guitar are stained yellow with time. With all of this ugliness Lee is still able to bring a lot of beauty to the book with her lyrical prose.

Kill the Dead is a haunting fantasy that, once finished, demands to be reread. The ending will leave you surprised and rewarded. I want to reread it just to see if I can find any clues Lee might have left out in the open for me. The pacing is slower than most modern stories, but I would ask you to embrace it and allow it to take you on this journey. There is minor violence, language and implied sexual situations. I would recommend it to teens and adults. I'd recommend you add this book to your personal library.