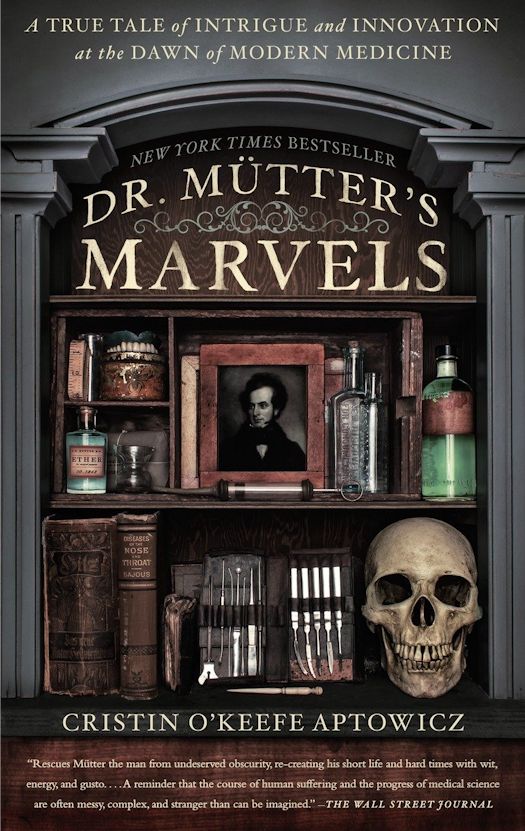 Imagine undergoing an operation without anesthesia, performed by a surgeon who refuses to sterilize his tools—or even wash his hands. This was the world of medicine when Thomas Dent Mütter began his trailblazing career as a plastic surgeon in Philadelphia during the mid-nineteenth century.

Although he died at just forty-eight, Mütter was an audacious medical innovator who pioneered the use of ether as anesthesia, the sterilization of surgical tools, and a compassion-based vision for helping the severely deformed, which clashed spectacularly with the sentiments of his time. Brilliant, outspoken, and brazenly handsome, Mütter was flamboyant in every aspect of his life. He wore pink silk suits to perform surgery, added an umlaut to his last name just because he could, and amassed an immense collection of medical oddities that would later form the basis of Philadelphia’s renowned Mütter Museum.

Award-winning writer Cristin O’Keefe Aptowicz vividly chronicles how Mütter’s efforts helped establish Philadelphia as a global mecca for medical innovation—despite intense resistance from his numerous rivals. (Foremost among them: Charles D. Meigs, an influential obstetrician who loathed Mütter’s “overly modern” medical opinions.) In the narrative spirit of The Devil in the White City, Dr. Mütter’s Marvels interweaves an eye-opening portrait of nineteenth-century medicine with the riveting biography of a man once described as the “[P. T.] Barnum of the surgery room.”

I went into this book expecting to learn about all of the crazy specimens in Dr. Mütter's museum and how he went about collecting them. Instead, I learned so much more that ended up being far more intriguing than I could have imagined. I credit all of this to Cristin O'Keefe Aptowicz. She wrote in such a way as to completely engage me as a reader and help me realize that Dr. Mütter, his life, and 19th century life and medicine and are all far more interesting than the specimens he collected.

Aptowicz truly loves her subject and as a reader you can feel it. She delves into the man and the times he lived in and how it all influenced him. She takes the time to help familiarize the reader with the now foreign world of the 19th century America and how it shaped Dr. Mütter and influenced how he became interested in medicine everywhere he practiced.

After finishing the book, I was amazed that more people don't know about Dr. Mütter and his impact on modern medicine, which is the perfect complement of great book. I want everyone to read it. It shined a light on a topic I've never had any previous interest in. When people think of plastic surgery, the majority will think of the Hollywood version instead of actual practical version that Dr. Mütter helped bring to America that saved countless lives and helped people from becoming “monsters” (the 19th century term for the deformed).

I honestly wouldn't change a thing about this book. It held so much information and used the appropriate primary sources so I had no fear of facts being diluted.

Dr. Mütter's Marvels is a truly fascinating book. I began expecting something completely different and left even happier than I could have ever anticipated. The writing is engaging while bringing some amazing medical information that I had no idea about. This needs to be required reading for anyone interested in becoming a doctor. There are are several surgeries that are described in detail, so I would recommend the book to older teens and adults. For anyone interested in medicine or anyone afraid of doctors this is a must read. It will help you be grateful for how easy we now have it.