Please welcome Robert Masello to The Qwillery. The Einstein Prophecy was published on August 1, 2015 by 47North. 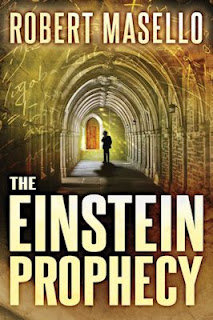 TQ:  Welcome to the Qwillery. What is the most challenging thing for you about writing? Are you a plotter or a pantser?

Robert:  I’m a pantser who wants to be a plotter. I so envy my friends who can plot out a whole novel ahead of time so that they never have those terrible night sweats when you’re halfway through writing a book and you suddenly realize you have no idea where to go next. Plotting ahead has just never worked for me, though. Give me an outline and five minutes later I depart from it.

TQ:  In addition to being a fiction author, you are a journalist and television writer. How does this affect your novel writing?

Robert:  Writing journalism taught me to respect and meet my deadlines; editors had no patience with you when you left them with a hole in their newspaper or magazine. And TV writing taught me to think hard in terms of character arcs and pace (I have a tendency to get languid in my story-telling).

Robert:  Yes, they are all what I would call historical thrillers with a supernatural twist. In the Medusa, I explored the Italian Renaissance through the eyes of the sculptor Benvenuto Cellini; in the Romanovs, I wrote about the end of the Russian dynasty and the rise of the Spanish Flu; in the Einstein book, the new one, I’ve written about Einstein’s tenure at the Institute for Advanced Study in Princeton, and the creation of the atomic bomb.

TQ:  Describe The Einstein Prophecy in 140 characters or less.

Robert:  I don’t Tweet, so already I’m lost. But set in 1944, it’s a mix of ancient history and modern physics, in which a mysterious ossuary holds the key to the fate of mankind, and Einstein becomes instrumental in the realization of its powers.

TQ:  Tell us something about The Einstein Prophecy that is not found in the book description.

Robert:  Einstein spent the last years of his life tormented that his theories had laid the groundwork for the development, and deployment, of atomic bombs. A lifelong pacifist, he was terribly dismayed to have helped bring this catastrophic force into the world.

TQ:  What sort of research did you do for The Einstein Prophecy?

Robert:  Tons. I read several biographies of Einstein, in addition to many books and articles about ancient Egyptian history and Biblical lore. The book mixes those things together. I also had to study up a bit on The Theory of Relativity and quantum mechanics. It was a nightmare.

TQ:  Who was the easiest character to write and why? The hardest, and why?

Robert:  The easiest was my tortured and wounded hero, an Army vet named Lucas Athan. I gave him everything from the scholarly bent I have to the headaches that I suffer from myself. The hardest character, far and away, was Einstein. I did not want this very great man to come off as silly or unconvincing in any way.

TQ:  Which question do you wish someone would ask about The Einstein Prophecy? Ask it and answer it!

Robert:  Did your impression of Einstein change as you researched and wrote the book?” Yes. Although I knew enough to admire him for his great breakthroughs in the realm of physics, I had no idea how much I would come to like him as a man. Almost everyone he met came away with an impression of a kind and decent and idealistic man, cultured, sophisticated, yet at the same time entirely natural and accepting.

TQ:  Give us one or two of your favorite non-spoilery lines from The Einstein Prophecy.

Robert:  I’m partial to the quiet moments. After Einstein has loaned some cough drops to an Arab scholar named Rashid, who has also taken refuge from a storm in the cavernous interior of the Princeton University chapel, Rashid watches him go: ‘As if to confirm his impression that Einstein lived with one foot in the material world and one in some other, Rashid couldn’t help but notice, as the scientist walked down the dimly illumined nave, that he passed from beams of light into patches of shadow, and that even on a day as chilly and wet as this, he wore no socks. No wonder he carried cough drops.’

Robert:  I’m already at work on a very challenging novel about another one of my heroes, Robert Louis Stevenson. To write it requires living under a rock for many months to come, and I am not looking forward to that. That’s the worst part of being a writer – having to lock yourself away from the world for so many hours of each day and night. I live like a vampire.”

TQ:  Thank you for joining us at the Qwillery.

Robert:  It was my pleasure. Now, where’s my rock? 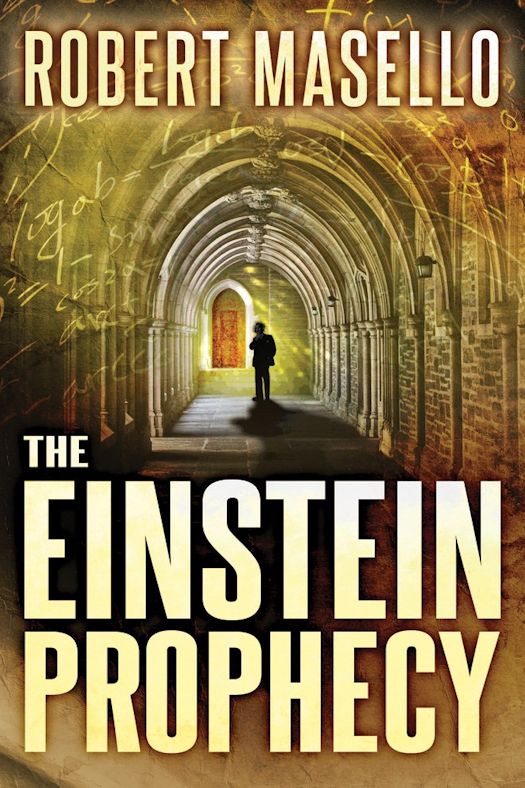 As war rages in 1944, young army lieutenant Lucas Athan recovers a sarcophagus excavated from an Egyptian tomb. Shipped to Princeton University for study, the box contains mysteries that only Lucas, aided by brilliant archaeologist Simone Rashid, can unlock.

These mysteries may, in fact, defy—or fulfill—the dire prophecies of Albert Einstein himself.

Struggling to decipher the sarcophagus’s strange contents, Lucas and Simone unwittingly release forces for both good and unmitigated evil. The fate of the world hangs not only on Professor Einstein’s secret research but also on Lucas’s ability to defeat an unholy adversary more powerful than anything he ever imagined. 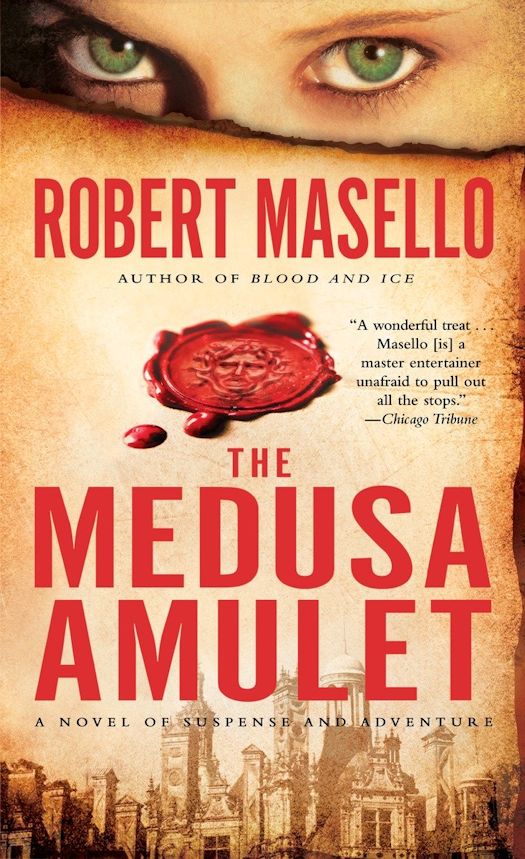 Benvenuto Cellini, master artisan of Renaissance Italy, once crafted a beautiful amulet prized for its unimaginable power—and untold menace. Now the quest to recover this legendary artifact depends upon one man: David Franco, a brilliant but skeptical young scholar at Chicago’s world-renowned Newberry Library. What begins as a simple investigation spirals into a tale of dangerous intrigue, as Franco races from the châteaux of France to the palazzos of Rome in a desperate search for the ultimate treasure—and an answer to a riddle that has puzzled mankind since the beginning of time. Aided by a beautiful young Florentine harboring dark secrets, pursued by deadly assassins, and battling demons of his own, Franco must ultimately confront an evil greater than anything conjured in his worst nightmares. 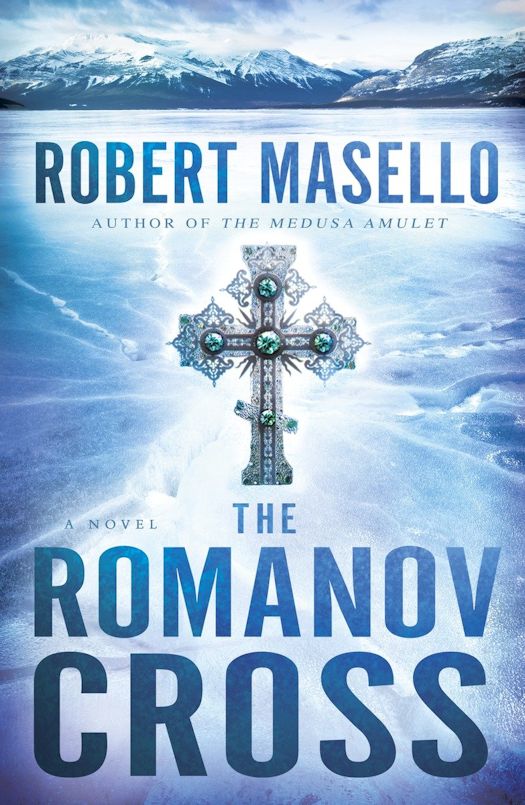 Nearly one hundred years ago, a desperate young woman crawled ashore on a desolate arctic island, carrying a terrible secret and a mysterious, emerald-encrusted cross. A century later, acts of man, nature, and history converge on that same forbidding shore with a power sufficient to shatter civilization as we know it.

Army epidemiologist Frank Slater is facing a court-martial, but after his punishment is mysteriously lifted, Slater is offered a job no one else wants—to travel to a small island off the coast of Alaska and investigate a potentially lethal phenomenon: The permafrost has begun to melt, exposing bodies from a colony that was wiped out by the dreaded Spanish flu of 1918. Frank must determine if the thawed remains still carry the deadly virus in their frozen flesh and, if so, ensure that it doesn’t come back to life.

Frank and his handpicked team arrive by helicopter, loaded down with high-tech tools, prepared to exhume history. The colony, it transpires, was once settled by a sect devoted to the mad Russian monk Rasputin, but there is even more hiding in the past than Frank’s team is aware of. Any hope of success hinges on their willingness to accept the fact that even their cutting-edge science has its limits—and that the ancient wisdom of the Inuit people who once inhabited this eerie land is as essential as any serum. By the time Frank discovers that his mission has been compromised—crashed by a gang of reckless treasure hunters—he will be in a brutal race against time. With a young, strong-willed Inuit woman by his side, Frank must put a deadly genie back in the bottle before all of humanity pays the price.

The Romanov Cross is at once an alternate take on one of history’s most profound mysteries, a love story as unlikely as it is inevitable, and a thriller of heart-stopping, supernatural suspense. With his signature blend of fascinating history and fantastic imagination, critically acclaimed author Robert Masello has once again crafted a terrifying story of past events coming back to haunt the present day . . . and of dark deeds aching to be unearthed. 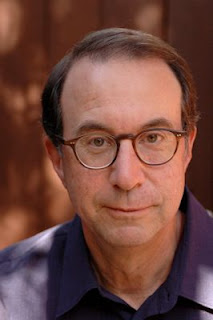 ROBERT MASELLO is an award-winning journalist (New York Newsday, The Washington Post, the Los Angeles Times, etc.) television writer (Charmed, Sliders, Poltergeist: the Legacy) and the bestselling author of many novels and nonfiction books, including Blood and Ice, The Medusa Amulet, and The Romanov Cross. A native of Evanston Illinois, he studied writing at Princeton University under the late, National Book Award winner Robert Stone, and served as the Visiting Lecturer in Literature at Claremont McKenna College for six years. Today, he lives and works in Santa Monica, CA.

His recently-released novel, a supernatural thriller entitled The Einstein Prophecy, held onto the #1 spot in the Amazon Kindle store for several weeks this summer.