Interview with Christina Henry and Review of Alice


Please welcome Christina Henry to The Qwillery. Alice, Christina's most recent novel, was published on August 4th by Ace. 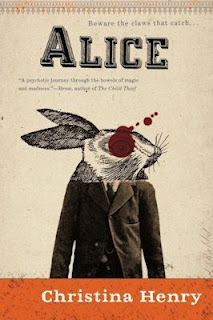 TQ:  Welcome back to The Qwillery. In a prior interview you stated that


I would love to write a historical novel. I’ve started writing a historical mystery. It’s a very different process. Since the BLACK WINGS novels take place in a contemporary period I don’t have to worry about language that I use or the geography of the city, since I live here and know it very well. But when writing a historical you have to think about so many details, down to whether or not certain terms were in use during the time period in which you are writing. It’s a challenge, but a fun challenge. http://qwillery.blogspot.com/2014/10/interview-with-christina-henry-october.html

Alice, your newest novel, is a dark historical fantasy based on the works of Lewis Carroll. Was writing Alice a fun challenge? How much of a departure is Alice from your Black Wings series?

Christina: It is a tremendous departure. Interestingly, the book I was writing during that last interview was not Alice. Alice is not set in a specific time period or in a real place. In making up my own place I was able to create my own geography and my own language and my own rules for the world. This was obviously different from the Black Wings series because that series was set in contemporary Chicago, and I felt I had to maintain the Chicago I live in.

I wrote Alice partially because I wanted to be a better writer. It was so different from anything I’d written before and I wanted to push myself out of my comfort zone.

Christina:  This is not Wonderland.

TQ:  Tell us something about Alice that is not found in the book description.

Christina: Alice’s companion throughout the book is Hatcher, a murderer who is in the room next to hers in the asylum. Hatcher doesn’t really remember what he did to end up in there, and there is a tension throughout the story because of that. Who is Hatcher? And will he turn on Alice?

TQ:  What inspired you to write Alice?

Christina: I had been thinking for some time that I wanted to write a story inspired by Alice’s Adventures in Wonderland and Through the Looking Glass. There is a kind of quality of myth about Alice and Wonderland that lends itself to interpretation. Then I woke up one morning thinking about a girl under glass. That led to a key scene in a brothel that became the driving force behind the whole book.

TQ:  What sort of research did you do for Alice?

Christina:  This was actually a book that was easy to write from start to finish. I never struggled with the plot or characters the way I have with other books. It’s written in third person but stays very close to Alice, and the only other character that is with her throughout the book is Hatcher. They are both extremely damaged people but I always felt like I understood them.

TQ:  Give us one or two of your favorite non-spoilery lines from Alice.

Christina:  From Chapter 1: “Someone had given her a cup of tea once, someone with blue-green eyes and long ears. Funny how she couldn’t remember his face, though. All that part was hazy, her memory of him wrapped in smoke but for the eyes and ears. And the ears were long and furry.”

TQ:  What's next? Will you be writing more novels based on Carroll's works?

Christina:  There will be a sequel to ALICE called RED QUEEN. It will be released in July of 2016.

Christina:  Thanks for having me! 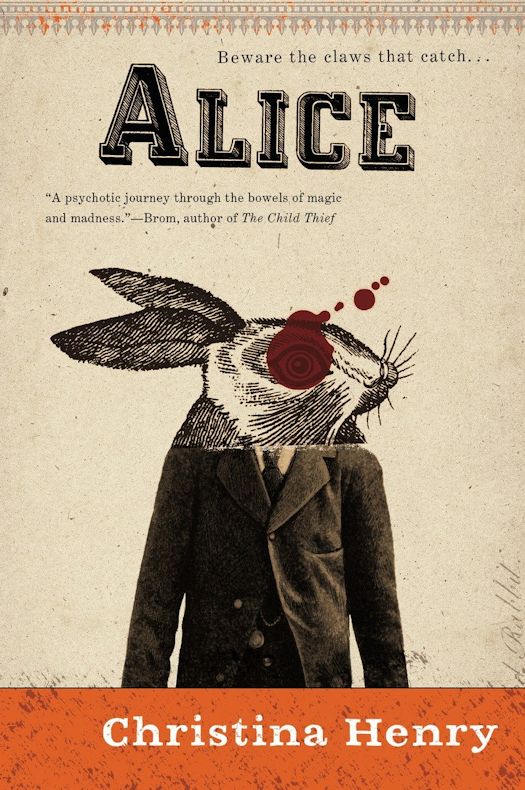 In a warren of crumbling buildings and desperate people called the Old City, there stands a hospital with cinderblock walls which echo the screams of the poor souls inside.

In the hospital, there is a woman. Her hair, once blond, hangs in tangles down her back. She doesn’t remember why she’s in such a terrible place. Just a tea party long ago, and long ears, and blood…

Then, one night, a fire at the hospital gives the woman a chance to escape, tumbling out of the hole that imprisoned her, leaving her free to uncover the truth about what happened to her all those years ago.

Only something else has escaped with her. Something dark. Something powerful.

And to find the truth, she will have to track this beast to the very heart of the Old City, where the rabbit waits for his Alice.

Alice by Christina Henry puts an entirely new and unexpected spin on Alice's Adventures in Wonderland and Through the Looking Glass by Lewis Carroll. The events in Alice take place after the Carroll stories. Henry links familiar events in those stories to the events happening in Alice, but this is not Carroll's Alice and nothing is at all as innocent as it seemed.

The novel starts with Alice in an insane asylum. She has been there for 10 years since her trip to the Old City with a friend. She returned to the New City covered in blood with no real memories of what happened save for something about a rabbit. Her parents committed her. In the asylum her only friend is Hatcher who she can see through a small hole in the wall to his adjoining cell. Fire breaks out and Alice and Hatcher escape, but so does something very evil - the Jabberwocky

Since Alice does not fully remember what happened to her at the beginning of the novel, we also know little of what happened and learn as she does. Hatcher is mad, but over the years in the asylum Alice has gotten to know him and his moods. Together they must stop the Jabberwocky before he destroys the Old and New Cities.

Henry includes many of the characters from the classic tales - they are familiar yet are recast as much more sinister and evil. There is blood and gore and darkness in Henry's novel. Throughout the novel Alice and Hatcher face old foes and their pre-asylum memories until the inevitable showdown with the Jabberwocky.

Henry gives plenty of information about the Old City and New City - class distinctions, women's place in society, and the way the Old City works with its gangs and bosses, for example. While this is not the focus of the novel it provides a rich backdrop for the story.

I really enjoyed seeing Alice change throughout the novel as she recovers her memories and develops inner strength. She and Hatcher make a terrific team and are an unusual duo. Hatcher is very protective of Alice, though he is the more unstable of the two. They are both fighters who won't give up on each other or on defeating the Jabberwocky.

Alice moves at a quick pace from start to finish. Henry deftly creates a new story for Alice that is both familiar and frightening, twisted and tantalizing, menacing and magic. Alice is a fabulous novel!

Christina Henry is the author of the national bestselling Black Wings series featuring Agent of Death Madeline Black and her popcorn-loving gargoyle, Beezle. She lives in Chicago.