Please welcome James L. Sutter to The Qwillery. James is the Executive Editor for Paizo Publishing and a co-creator of the Pathfinder Roleplaying Game as well as the author of two Pathfinder Tales. 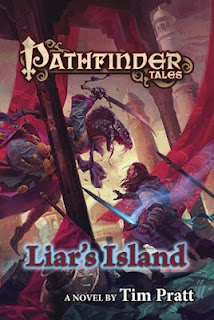 TQ:  Welcome to The Qwillery. What is Pathfinder? Pathfinder Tales? How do the novels fit into the Pathfinder world? Does anything from the novels end up in the RPG?

James:  Pathfinder is a tabletop roleplaying game that grew out of the tradition of Dungeons & Dragons (specifically the third edition of the rules) to become one of the best-selling roleplaying games in the world. In it, players create fantasy personas—wizards and warriors, elves and dwarves, or far stranger things—and try to respond in character to challenges presented by the Game Master. You can think of the Game Master as the director, and each player as an actor. It's group storytelling, tactical wargaming, and improv theater all rolled into one!

What makes Pathfinder unique, though—at least in my mind—is the setting we've created for it, which incorporates elements of nearly every different kind of fantasy. So in addition to your Tolkien- or Robert E. Howard-inspired fantasy, there's also gothic horror, steampunk, Lovecraftian elements, robots and aliens, regions inspired by non-European mythologies and traditions—the works. We're also trying very hard to make the world diverse and inclusive not just in terms of genre, but in representing the wide range of ethnicities, sexualities, body types, gender expressions, and so on found in our world.

With the Pathfinder Tales novels, we bring in some of the most talented fantasy authors around and let them play in our sandbox, writing stories that explore the world we've created. There's no need to have played the game—the novels and game are simply two different ways of portraying the same setting. But if you fall in love with the books, you're likely to enjoy the game, and vice versa!

There's definitely a lot of cross-pollination between the novels and the game. The novels get to explore bits of our world far more deeply than we can in a setting book, really showing you what it feels like to be there, and great ideas that pop up in the novels often end up in the game. For instance, Liane Merciel's novel Nightglass was our first really in-depth look at the twisted nation of Nidal, ruled by the god of torture, and her coming-of-age story about a young wizard being raised to the priesthood of the pain god really set the tone for that part of our world, and introduced a bunch of awesome adventure locations, cultural practices, and so on. Whether it's between novels, games, comics, or whatever, we find that everything is better when collaboration is a two-way street!

James:  Pathfinder is classic fantasy roleplaying, but with smoother rules, more diversity, and more inclusion. There's something here for everyone!

TQ:  Paizo published 26 Pathfinder Tales novels before teaming up with Tor Books, and Tor has also just released the first 26 novels in digital format. In addition Lord of Runes by Dave Gross came out in June, and Liar's Island by Tim Pratt was published on August 18th (print and digital). If a reader who was not familiar with the RPG wanted to jump in and read the Pathfinder Tales where do they start?

James:  Clearly the best way to start is to win the giveaway on this blog and read your new copy of Liar's Island! :) But really, you can start anywhere. It's always been important to us that any book be a great first introduction to the world, so even though some authors have recurring characters, you can pick up any Pathfinder Tales book that looks good to you and have that be a great first book. Want a con man and his talking sword? Read Liar's Island. Want a badass viking-turned-pirate who's also a single mother? Read Wendy Wagner's Skinwalkers. Love African-inspired fantasy? Try Gary Kloster's Firesoul. And if you're having trouble deciding which author to start with, you can always read some of the free short web fiction stories archived at http://paizo.com/pathfinder/tales/serial and find your favorites that way!

TQ:  Is there a reading order for the Pathfinder Tales?

James:  Not for the line as a whole. To be though, fair, there are some series within the line. For instance, Dave Gross's stories about Radovan and the Count (think Sherlock Holmes if Watson were half devil) now include 5 books, from Prince of Wolves to the newly released Lord of Runes. But while readers who start with Prince of Wolves may enjoy watching the characters evolve over time, someone who wants to jump straight into the most recent book should enjoy themselves just as much.

TQ:  What's next for the Pathfinder Tales?

James:  We've got a bunch of cool stuff coming down the pipe! In October we've got Beyond the Pool of Stars by Howard Andrew Jones, a swashbuckling adventure story about a young woman who's a deep-water salvager in a tropical colony, and who has to take on a dangerous jungle dive to aid a tribe of lizard-people. Then in December, we've got Bloodbound, the debut novel from Paizo's own Editor-in-Chief and Pathfinder co-creator F. Wesley Schneider, a gothic tale all about a half-vampire monster hunter attempting to uncover the secrets of her past. And beyond that, we've got more stories coming from folks like Liane Merciel, Max Gladstone, Sam Sykes—it's really exciting!

James:  Thank you! It's always a pleasure! 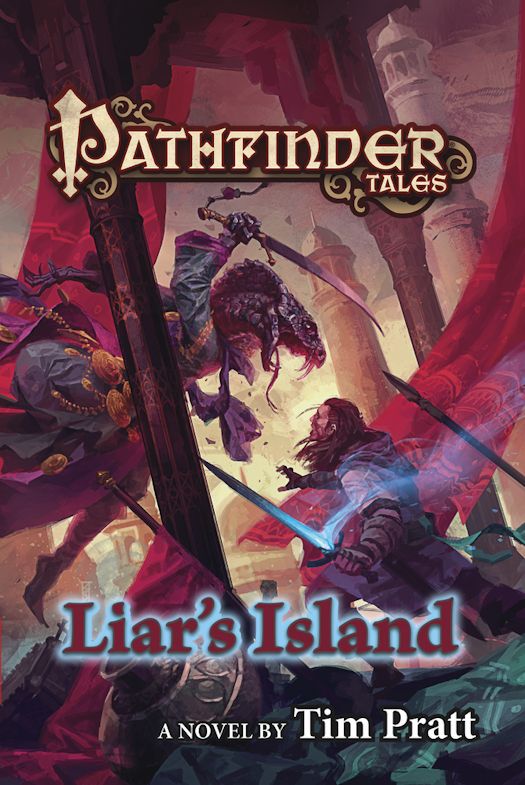 A Thief and His Sword

Rodrick is a con man as charming as he is cunning. Hrym is a talking sword of magical ice, with the soul and spells of an ancient dragon. Together, the two travel the world, parting the gullible from their gold and freezing their enemies in their tracks. But when the two get summoned to the mysterious island of Jalmeray by a king with genies and elementals at his command, they'll need all their wits and charm if they're going to escape with the greatest prize of all—their lives.

From Hugo Award winner Tim Pratt comes a tale of magic, assassination, and cheerful larceny, set in the award-winning world of the Pathfinder Roleplaying Game. 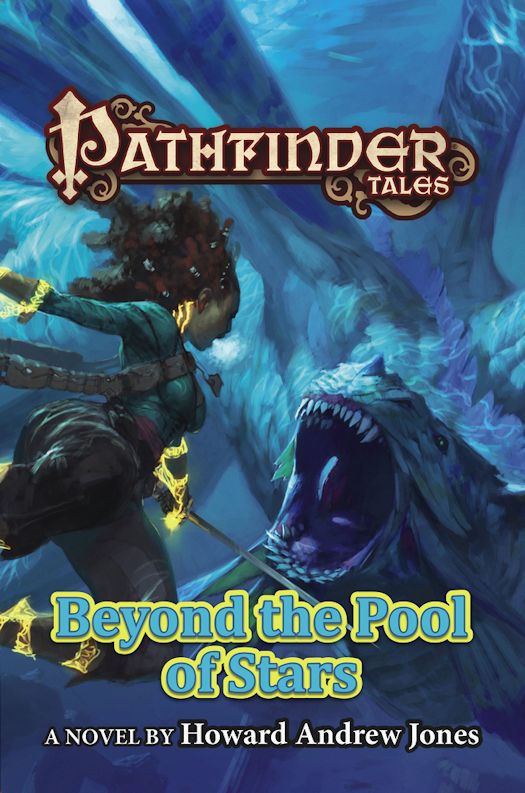 From critically acclaimed author Howard Andrew Jones comes a fantastical adventure of deep-water danger and unlikely alliances in Pathfinder Tales: Beyond the Pool of Stars, set in the award-winning world of the Pathfinder Roleplaying Game. 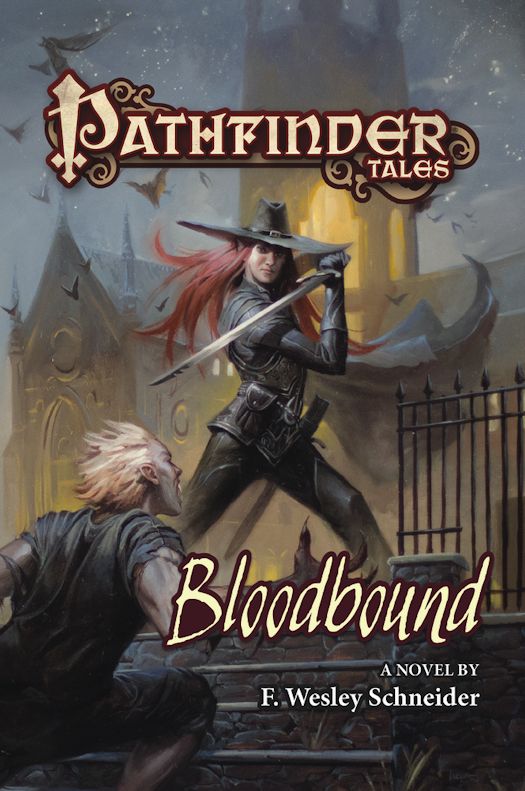 Larsa is a dhampir-half vampire, half human. In the gritty streets and haunted moors of gothic Ustalav, she's an agent for the royal spymaster, keeping peace between the capital's secret vampire population and its huddled human masses. Yet when a noblewoman's entire house is massacred by vampiric invaders, Larsa is drawn into a deadly game of cat-and-mouse that will reveal far more about her own heritage than she ever wanted to know. 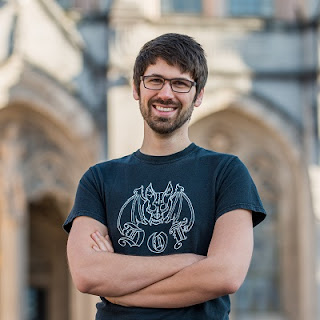 James L. Sutter is the Executive Editor for Paizo Publishing and a co-creator of the Pathfinder Roleplaying Game. He's the award-winning author of the Pathfinder Tales novels Death's Heretic and The Redemption Engine—both starring an atheist detective forced to work for the death goddess—as well as numerous short stories, game supplements, and comics. For more information, visit him at jameslsutter.com or say hello on Twitter @jameslsutter.

What:  One entrant will win a hardcover copy of Pathfinder Tales: Liar's Island by Tim Pratt from Tor Books. US / CANADA ONLY

Who and When:  The contest is open to all humans on the planet earth with a US or Canadian mailing address. Contest ends at 11:59 PM US Eastern Timeon August 30, 2015. Void where prohibited by law. No purchasenecessary. You must be 18 years old or older to enter.