Guest Blog by R.S. Belcher and review of Nightwise


Please welcome R.S. Belcher to The Qwillery as part of the Nightwise Tour. Nightwise will be published on August 18th by Tor Books. 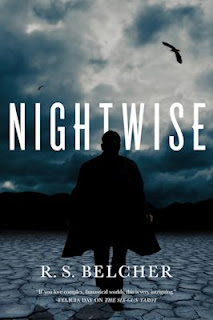 I, the Wizard: Navigating the shifty streets of Noir and Urban Fantasy

I think my very first hint, or taste of the Urban Fantasy genre was in Roger Zelazny's Nine Princes of Amber, where Corwin, cynical, chain-smoking, smart-assed bastard of an immortal prince of the classical fantasy kingdom of Amber wakes up in a sanitarium on 1960's Earth and has no idea who he is, how he got there, or who is out to kill him. I was hooked. I liked fantasy very much as a kid, but I loved detective stories and novels (and westerns too, but that's another story).
I can only speak for myself, but in my opinion Urban Fantasy is a response to the decades of High Fantasy, in the tradition of folks like James Branch Cabell, T. H. White, C. S. Lewis, and of course, Lewis' dear friend and the godfather of High Fantasy—J. R. R. Tolkien. Tolkien set the tone for fantasy adventures for a very long time, and still does. High Fantasy is still a thriving publishing staple and everyone, from David Eddings to David Drake, has taken a swipe at telling a tale of dragons, magic swords, daring knights, faeries, elves, and wizards.
Then along came the troublemakers—the long haired freaky kids who grew up on the fantasy tales of the grandmasters and tried to make them relevant to the madness and change of the 60's and 70's, the so-called “New Wave.” This movement included folks like Zelazny, Ursula K. Le Guin, and Michael Moorcock. Moorcock's fantasy series, such as the Elric series, turned a lot of traditional Fantasy conventions on their ear. Moorcock's “hero,” Elric, was a drug-using, amoral agent of demonic gods of chaos with a howling black magic sword that drank the souls of his enemies. Quite a far cry from Aragorn and his noble blade, Anduril.
As a reader and a writer, I cut my teeth on New Wave Fantasy and it influenced my writing. It was my dream come true—all the wonders and mystery of fantasy with the dark cynicism, world-weary wisdom, and the gritty atmosphere of folks like Raymond Chandler, Mickey Spillane, Dashiell Hammett and then later influences, like John D. McDonald, Robert Parker and Warren Murphy. The New Wave brought with it the fantasy anti-hero, and from there it was a switchblade's throw to the dark streets of Urban Fantasy.
Today, Urban Fantasy is a force in publishing. It sells, and it attracts a lot of readers. Authors like Mercedes Lackey, Nancy Collins, Laurell K. Hamilton, Simon R. Green, Kim Harrison, Elizabeth Bear, and Richard Kadrey to name a few, have taken the mythos of the detective story—Chandler's style of the “slumming angel,” and married it to the fantastic, the supernatural, and the horrific.
The first stories I wrote at 13 were all written in first-person with a world-weary, cynical hero battling bizarre supernatural forces, like serial killing dolls and terrorist vampires. I think there was a ghost in there too. My unlikely hero seemed chosen by his discovery of some unnameable, unknowable force in the darkness that led him into danger, terror and adventure—as if the night was opening itself to him, teaching him a secret history of the world. Believe it or not, in those stories, I called that force “Nightwise”...I think I actually called that first supernatural detective story, “Nightwise”...I hadn't remembered that until just now, just this second, writing this, and there it is...Nightwise...son of a bitch. Nightwise is the name of my new novel, my first Urban Fantasy. It's out on August 18th and if you're into the kind of stuff I've been talking about, I'd appreciate it if you'd give it a read.
I'm extremely grateful to Sally Janin for asking me to write this, asking me the question. You see, much like many Urban Fantasy characters, I don't dwell too much in my own past, if I can help it. Dipping into the past for me is like bobbing for apples in a piranha tank. But I am thankful for remembering this bit; I got an apple this time instead of a face full of nasty bite marks, so I'll call it a win.
Those old fiction stories are locked away in a footlocker, never to see the light of day, I hope—they are pretty awful. However, If you want to know where Laytham Ballard, my anti-hero, my cynical, chain-smoking, smart-assed bastard of a wizard, comes from, look no further than that old trunk full of my first stories and a collection of old, battered paperbacks—from I, the Jury and the Long Goodbye, to Nine Princes of Amber. I'll think you'll find him in there. 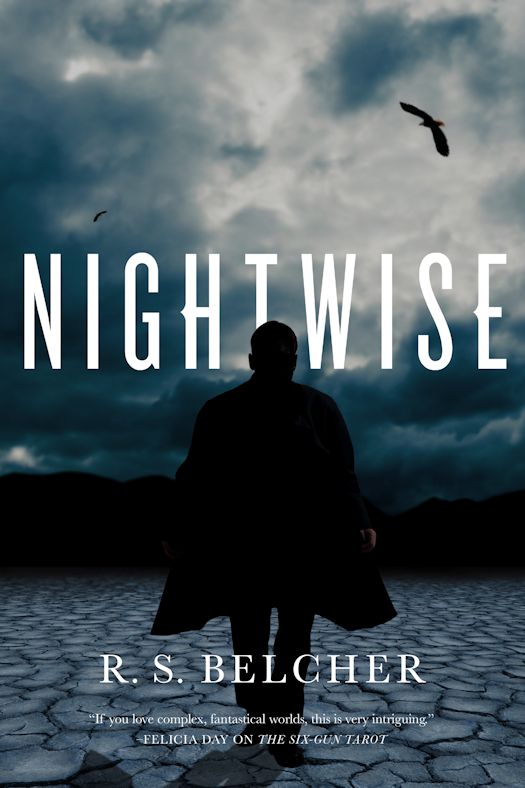 Now a promise to a dying friend has Ballard on the trail of an escaped Serbian war criminal with friends in both high and low places--and a sinister history of blood sacrifices. Ballard is hell-bent on making Dusan Slorzack pay for his numerous atrocities, but Slorzack seems to have literally dropped off the face of the Earth, beyond the reach of his enemies, the Illuminati, and maybe even the Devil himself. To find Slorzack, Ballard must follow a winding, treacherous path that stretches from Wall Street and Washington, D.C. to backwoods hollows and truckstops, while risking what's left of his very soul . . . .

Nightwise is R.S. Belcher's third published novel after his two steampunky Western historical fantasy novels - The Six-Gun Tarot and The Shotgun Arcana. Nightwise is a noir urban fantasy with a mostly irredeemable main character - Laytham Ballard. Ballard is the self-proclaimed greatest magus on earth. He's got quite a track record when it comes to his magical skills so the claim is not far off.

Despite his apparent utter disregard for everyone around him Ballard had moments of what appear to be compassion though he generally does not come off as nice. He does keep his word and while he may start off doing something for someone else it often morphs beyond that point in his constant attempt to make sure his the greatest wizard of all. I had to wonder if Ballard is just really insecure or if he believes his own press so to speak. Ballard has done many things he regrets but there are compelling reasons he is the way he is. He's also very adept at using people to get what he wants and in Nightwise he want to kill Dusan Slorzack. There is an incredible amount of violence in Nightwise. Ballard is not above using his fists and more to get what he wants if magic won't do the trick.

Laytham Ballard is certainly not a typical hero or even noir anti-hero. He's his own sort of hero - brilliant, nasty, deadly, badass. You may not like the way he gets things done but in the end he does many things that are right, sometimes for what appear to be wrong reasons. Despite himself he has a close knit group of friends who are as unusual and intriguing as the world around them.

Belcher has created fascinating, inventive and very well thought out magic systems and different types of practitioners of magic. The writing is taut, the pacing rapid and Nightwise is full of action as Ballard is on the hunt for Slorzack. Nightwise is dark, gritty, unrelenting, and absolutely riveting. 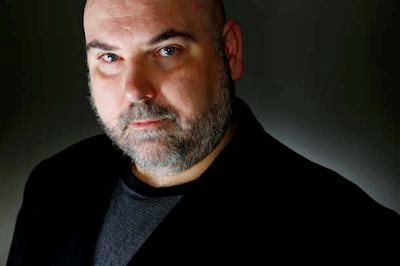 R.S. BELCHER is the author of two acclaimed "weird westerns," The Six-Gun Tarot and The Shotgun Arcana. Nightwise is his first contemporary fantasy novel. He lives Salem, Virginia.

What:  One entrant will win a hardcover copy of Nightwise by R.S. Belcher from the Tor Books. US / CANADA ONLY

Who and When:  The contest is open to all humans on the planet earth with a US or Canadian mailing address. Contest ends at 11:59 PM US Eastern Time on August 26, 2015. Void where prohibited by law. No purchase necessary. You must be 18 years old or older to enter.