It is my first year as an SPFBO judge, and I am so excited and honored to participate on Team Qwillery. I was tasked to read six books at least 30% or at least 50 pages. From there, I am to choose which book should continue on to the semi-finals. Choosing was a difficult task because the books are so different in style, age range, and subject content. I have including some brief content review and some information on the various books.


The following 5 books have been eliminated:

This was a fun and quirky story. Set in the style of Terry Pratchett, the humor was great. It turns fantasy cliches on their head. Princess Sylvanna dreams of the life of high adventure and quests. It is pretty dull being a princess. We meet a cast of oddball characters and shenanigans. The writing is well done, although I got lost a few times in the multiple POV. It is a solid read, and I enjoyed it.

The Dark Yule is about a cat, specifically a Main Coon cat named Pumpkin Spice. Cats are not what they seem. They can see monsters, ghouls, and all the horrible creatures of the night that humans can not see. I loved this premise. I like to think that cats are actually like this and they battle the nefarious and evil. They basically just put up with us humans. It kind of fits if you have ever owned a cat. The characterization was fantastic. Pumpkin Spice is so cool, so proud and full of sass. Her adventure is dark and reminded me a bit of a Neil Gaiman book with Lovecraftian overtones.

This story is the adventures of Lily Singer, intrepid wizard not a witch.

Character-wise, Lily is stuffy and unsure of herself outside of magic. The first book is an adventure between Lily and Sebastian involving an old house, and ghosts. Sebastion is a witch, not a wizard, and in that, there is a bit of classicism as to what kind of magic is proper magic. This story was fluffy and fun, although the book as a whole was confusing. I was unsure how the various parts fit together as a single entity. It was more like short stories with a common set of characters and theme.

Tooth Goblins is an original middle-grade fantasy story. It takes the legend of tooth Faires and turns it on its ear involving fairies, goblins, teenage boys, and a quest. The story was a lot of fun but lost me in some of the writing, and it dragged a bit.

This story started strong, Zwikstra employed well-done worldbuilding and characterization. Alban and Rahan are strong characters put into a life-changing predicament. But as the story progressed, I became lost in the minor plot points. There was just too much to follow. 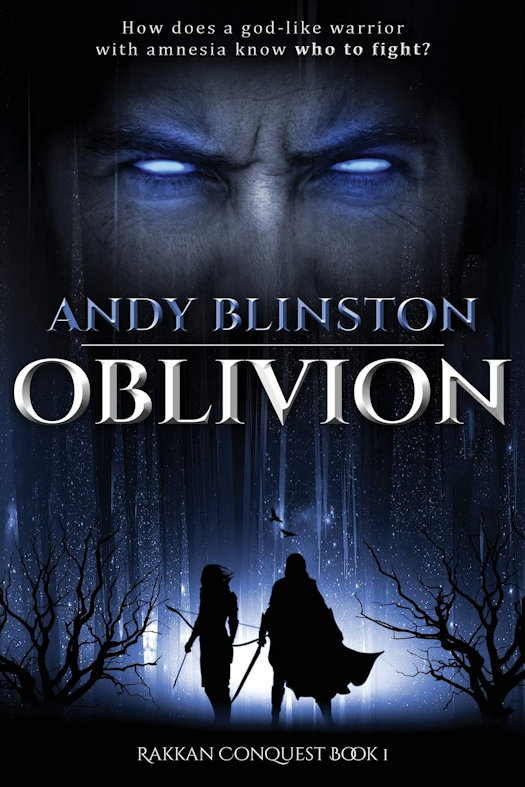 Darius wakes surrounded by blood. Most of his mind has been stolen, and the dark figure that took it wants the rest.

Caught in a raging war between the human empire and fiery rakkan invaders, he soon learns his fearsome powers have made him an enemy to both.

Unable to tell friend from foe, he must fight to escape a fate worse than death. His only helper is a mysterious female warrior who promises to restore him to former glory. But can she be trusted?

Is he ready to discover the horrifying truth of who he was, and why he's wanted?

If you like fantasy full of mystery and action, you’ll love this book.

Oblivion had me at the get-go. The opening scene is harrowing, and it sets the stage for the main protagonist's motivations throughout the story. Darius, the main character, is complicated. His memory has mostly disappeared. He does not know who he is or what he is capable of. The only thing he has is a traumatic memory of him as a child. Even though the "mind-wipe" can be tropey in most books, I found Blinston's use of the "mind-wipe" plot device interesting. Especially within the context of his created world. What would a great warrior do if he could not remember himself? This is especially true when set against other morally grey characters. Blinston kept the suspense and confusion as to what is right and correct for much of the novel.

One of the best parts of Oblivion is the supporting character of Lex. Often in dark fantasy, female characters can be written flatly. They can be the seductress or the crone. Or, they could be haughty and overly-harsh. I find this especially true in the Wheel of Time stories. Jordan had a difficult time writing female characters that didn't always pull their braids or fluff their skirts when angry. It gets old. Blinston did a good job with Lex. She is tough, as one would need to be tough existing in the Oblivion world, but she has broken parts of her that make her a more realistic character. It allows the audience the opportunity to understand her actions and her emotional plight. It gives her three dimensions when often women are written in two. I am looking forward to reading the next books in the series to see how her character develops. Her story was left on quite the cliffhanger, and if it plays out, can drastically change the path that she takes.

Darius, as the main protagonist, was solid. He isn't perfect. He makes some stupid decisions and behaves in childish ways occasionally through the story. I think the childish reactions to some situations were a good conscious choice on the author's part. Again, a character that is too much of one thing can ring flat. Darius has parts of him that are emotionally broken, much like Lex. This allows the reader to understand and empathize with his plight. Empathy makes this story work.

The villain of the story, Archimedes, is scary. Not, horror movie scary. But so dark and morally gray that his intentions, which are entirely logical and fine to him, shock and appall other characters in the story and by extension the reader. It is often that the scariest characters in books are ones that are entirely sure of their actions, even if those actions are horrendous. They don't think of themselves as the villain. They think themselves as the hero and act accordingly. Archimedes is like that. Although the reader does not understand the entirety of his actions until later in the book, the effects and consequences of disobedience to him are stark; he is too powerful not to obey.

The only slight detractor to this story was pacing. The story lulled in a few spots where Blinston was building backstory. This slowed down the pace significantly for me. The story picks up immediately, usually in the form of an action sequence, and moves the plot forward. But those lulls slowed the pacing down.

In conclusion, I enjoyed this story immensely. It is a great dark fantasy read up there with other notable works in the genre. Blinston left the story wide open for the next book, which is exciting. I want to know what is going to happen with the characters and look forward to reading the next one.
Posted by Qwill at 6:30 AM