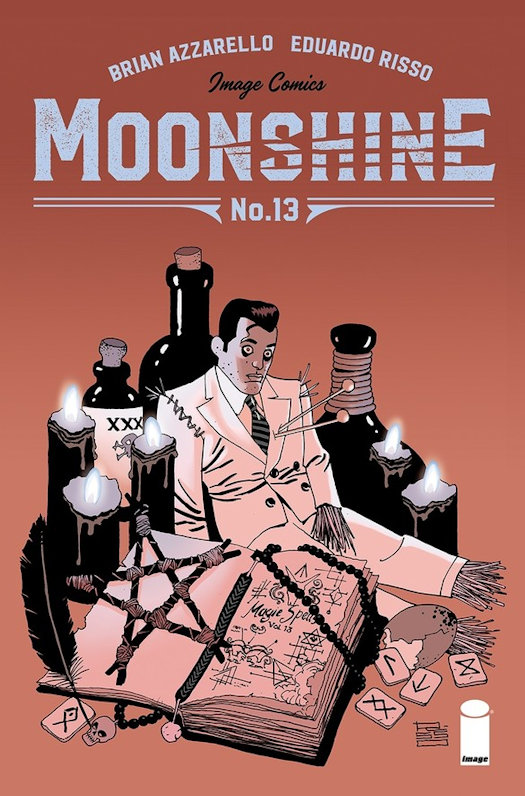 redefined the crime genre with 100 Bullets—Brian Azzarello (Batman: Damned, Faithless) and artist Eduardo Risso—are back to kick off an all-new story arc of Moonshine from Image Comics this November.

With the help of his girlfriend Delia, “Torpedo” Lou Pirlo made it to New Orleans in search of a cure for his werewolf curse. In Moonshine #13 however readers learn that curse cures cost money, and Lou is a little “light” on scratch. But if there’s one thing Lou can do, it’s hustle. So he’s off to work his way from the crookedest gutters to the swankiest gambling dens in The Big Easy—along the way crossing paths with witches, warlocks, and the occasional zombie.

Set during Prohibition, and deep in the backwoods of Appalachia, Moonshine tells the story of Lou Pirlo, a city-slick “torpedo” sent from New York City to negotiate a deal with the best moonshiner in West Virginia, one Hiram Holt. What Lou doesn’t figure on is that Holt is just as cunning and ruthless as any NYC crime boss. Because not only will Holt do anything to protect his illicit booze operation, he’ll stop at nothing to protect a much darker family secret...a bloody, supernatural secret that must never see the light of day… or better still, the light of the full moon.

Moonshine #13 will also be available for purchase across many digital platforms, including the official Image Comics iOS app, Amazon Kindle, Apple Books, comiXology, and Google Play.

“Shows Azzarello at what he does best, kicking ass and taking names… You won’t be disappointed.” —Fangoria

“When a blockbuster creative team reunites to work on a new project, the results are often magic. That is the case in Moonshine.” —TFAW.com blog

“As darkly beautiful and engrossing as you'd expect from Azzarello & Risso…with a kick as strong as the best corn liquor.” —Jason Aaron

"Azzarello and Risso go for the jugular with Moonshine's bloody tale of bootleggers, gangsters, and monsters both human and inhuman. But the silver bullet here is Risso's elegant use of color. Already a master of black and white, he somehow makes his art even creepier and more unsettling.” —Cliff Chiang

"The moody and tense storytelling Azzarello and Risso got famous for in 100 Bullets only increases with Moonshine. And with Risso doing his own coloring, his art has never been more seductive. More addictive than forbidden booze.” —Fábio Moon

"Moonshine delivers the goods, gets the readers hooked and craving for more. Azzarello and Risso did it again!”  —Gabriel Bá

“Incredible art and writing from two of the best creators in comics. Plus two of my favourite subjects… booze and werewolves all in one book! A winner!” —Tula Lotay

“A dark and unrelenting story that will suck you into another time and place. It’s Miller's Crossing meets Deliverance. Azzarello and Risso bring the goods as they always do!” —Amy Chu

“Moonshine by Azzarello & Risso for Image Comics is a book that makes me wish I had thought of it first!! RECOMMENDED!”  —Francisco Francavilla

ABOUT IMAGE COMICS
Image Comics is a comic book and graphic novel publisher founded in 1992 by a collective of bestselling artists. Image has since gone on to become one of the largest comics publishers in the United States. Image currently has six individuals on the Board of Directors: Robert Kirkman, Erik Larsen, Todd McFarlane, Marc Silvestri, Jim Valentino, and Eric Stephenson. It consists of five major houses: Todd McFarlane Productions, Top Cow Productions, Shadowline Comics, Skybound Entertainment, and Image Central. Image publishes comics and graphic novels in nearly every genre, sub-genre, and style imaginable. It offers science fiction, fantasy, romance, horror, crime fiction, historical fiction, humor and more by the finest artists and writers working in the medium today. For more information, visit www.imagecomics.com.
Posted by Qwill at 4:30 PM