GIDEON FALLS Being Adapted for TV

PORTLAND, Ore. 10/03/2019 — Hivemind today announced that it is joining forces with James Wan (the 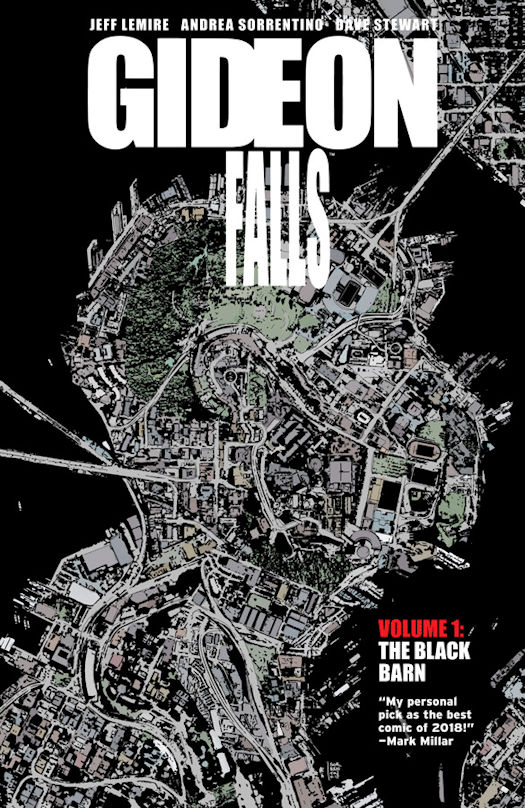 “We are very excited about James Wan and Atomic Monster joining the GIDEON FALLS team,” said series co-creators Jeff Lemire and Andrea Sorrentino. “James’ creative vision will be a wonderful fit for the world of GIDEON FALLS and to help adapt the series to television in a truly unique and exciting way.”

An atmospheric thriller colliding rural mystery and urban horror, the series follows an ensemble cast of seemingly random strangers — a washed-up Catholic priest, an uncompromising female sheriff, and a young recluse obsessed with unraveling a conspiracy buried in his city’s trash — as they become drawn into a mystery connected to a long-forgotten local legend.

"To have a filmmaker of James Wan's caliber, talent, and vision contributing to the atmospheric and terrifying world that Jeff Lemire and Andrea Sorrentino have created with GIDEON FALLS is nothing short of incredible," said Hivemind co-founders Kathy Lingg, Dinesh Shamdasani, and Jason Brown. "This is a high-powered and formidable combination for one of the most acclaimed comic series of the decade, and James and his colleagues at Atomic Monster – Michael Clear and Rob Hackett – are the perfect partners to help bring our adaptation to life. Fans of GIDEON FALLS, rest assured: We have some incredible surprises yet in store."

Acquired by Hivemind following an intense, multi-party bidding war, GIDEON FALLS marks a major new addition to the company's quickly expanding roster of film and television projects, which currently includes Netflix's hotly anticipated adaptation of THE WITCHER fantasy franchise starring Henry Cavill and Amazon's acclaimed science-fiction series THE EXPANSE, which was recently renewed for a fifth season in advance of the fourth's debut. The company is also currently producing the upcoming feature film BLOODSHOT, starring Vin Diesel and based on the best-selling Valiant comic book series, for Sony Pictures.

In recent months, Hivemind has also announced multiple forthcoming projects in the genre space, including WEIRD FANTASY, a new television series based on the subversive and internationally renowned science-fiction stories of EC Comics; a biographical feature film chronicling the life of comic book publisher, MAD MAGAZINE co-founder and counterculture icon William M. Gaines; and the first live-action adaptation of FINAL FANTASY, based the multibillion-dollar video game franchise, in partnership with Square Enix and Sony Pictures Television.

GIDEON FALLS will notably mark the first collaboration between Hivemind and Atomic Monster.

ABOUT ATOMIC MONSTER
James Wan’s production company, Atomic Monster, launched its successful slate with ANNABELLE (2015) and followed with LIGHTS OUT (2016), ANNABELLE: CREATION (2017), THE NUN (2018), THE CURSE OF LA LLORONA (2019) and ANNABELLE COMES HOME (2019).  All were New Line Cinema productions released by Warner Bros.

Atomic Monster’s television slate kicked off with MACGYVER, a re-imagining of the classic television series, which premiered on CBS in the Fall of 2016.  The 4th season of the series begins airing this month.  The company’s 2nd series was SWAMP THING (2019) for Warner Bros. Television.  The program streamed on DC Universe.

Best-selling, award-winning and acclaimed Italian artist Andrea Sorrentino was named IGN's "Best Comic Artist" of 2012 and, in the years since, has contributed to some of Marvel and DC Comics' greatest properties, including X-MEN, WOLVERINE: OLD MAN LOGAN, SECRET EMPIRE, and GREEN ARROW. In addition to their ongoing work on GIDEON FALLS, Lemire and Sorrentino will next collaborate on JOKER: KILLER SMILE for DC Comics' Black Label imprint.

ABOUT IMAGE COMICS
Image Comics is a comic book and graphic novel publisher founded in 1992 by a collective of bestselling artists. Image has since gone on to become one of the largest comics publishers in the United States. Image currently has six individuals on the Board of Directors: Robert Kirkman, Erik Larsen, Todd McFarlane, Marc Silvestri, Jim Valentino, and Eric Stephenson. It consists of five major houses: Todd McFarlane Productions, Top Cow Productions, Shadowline Comics, Skybound Entertainment, and Image Central. Image publishes comics and graphic novels in nearly every genre, sub-genre, and style imaginable. It offers science fiction, fantasy, romance, horror, crime fiction, historical fiction, humor and more by the finest artists and writers working in the medium today. For more information, visit www.imagecomics.com.
Posted by Qwill at 5:51 AM