Over My Dead Body Coming in January 2020 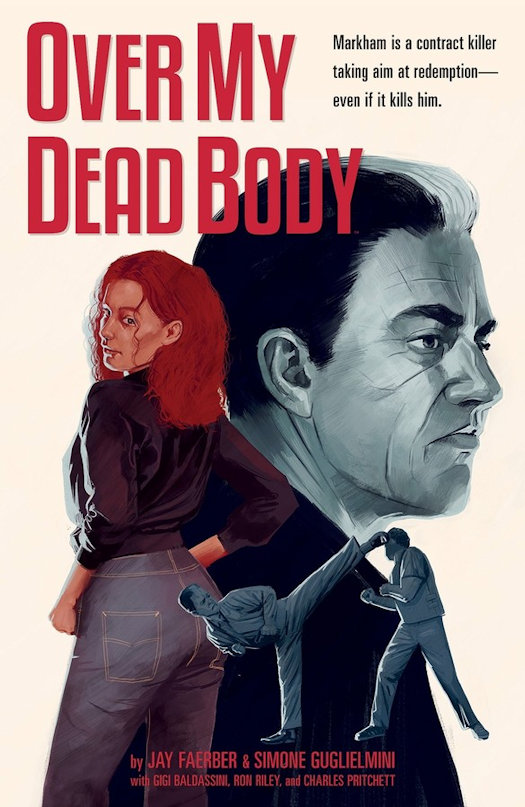 many of the same characters—comes the all-new, standalone graphic novel thriller Over My Dead Body by Jay Faerber, Simone Guglielmini, Gigi Baldassini, and Ron Riley, with a cover by Jacob Phillips (My Heroes Have Always Been Junkies). It will hit stores this January 2020 from Image Comics.

In Over My Dead Body, a prison warden’s daughter has fallen in with a separatist militia, and the warden’s only chance to rescue her is his most dangerous inmate: the notorious contract killer, Markham. Markham claims that a near-death experience convinced him to atone for his past sins, and to start saving lives instead of taking them. This may be Markham’s one last shot at redemption. But is he ready to die for that shot? Over My Dead Body is a fast-paced, pulpy thriller perfect for fans of Jack Reacher and John Wick.

“Since the moment Near Death ended, Simone and I have been planning the next step in Markham’s path to redemption,” said Faerber. “We’re thrilled to unveil this new thriller that serves as a continuation of that series, but is presented in a fresh, accessible format for new readers.”

Over My Dead Body trade paperback (ISBN: 978-1-5343-1494-8, Diamond Code OCT190056) will be available on Wednesday, January 15 and in bookstores on Tuesday, January 21. It can be pre-ordered at your local comic book shops on Amazon, Barnes & Noble, Books-a-Million, IndieBound, and Indigo.

Over My Dead Body will also be available for purchase across many digital platforms, including the official Image Comics iOS app, Amazon Kindle, Apple Books, comiXology, and Google Play.

ABOUT IMAGE COMICS
Image Comics is a comic book and graphic novel publisher founded in 1992 by a collective of bestselling artists. Image has since gone on to become one of the largest comics publishers in the United States. Image currently has six individuals on the Board of Directors: Robert Kirkman, Erik Larsen, Todd McFarlane, Marc Silvestri, Jim Valentino, and Eric Stephenson. It consists of five major houses: Todd McFarlane Productions, Top Cow Productions, Shadowline Comics, Skybound Entertainment, and Image Central. Image publishes comics and graphic novels in nearly every genre, sub-genre, and style imaginable. It offers science fiction, fantasy, romance, horror, crime fiction, historical fiction, humor and more by the finest artists and writers working in the medium today. For more information, visit www.imagecomics.com.
Posted by Qwill at 5:07 PM