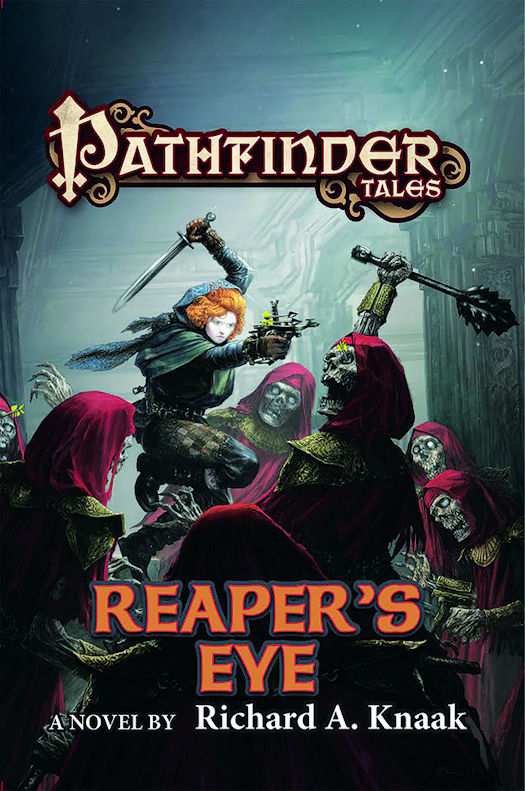 Daryus Gaunt used to be a crusader, before a questionable battlefield decision forced him to desert his unit. Pathfinder Shiera Tristane is an adventuring scholar obsessed with gaining the recognition she feels was stolen from her. When both are contacted by a sinister talking weasel and warned of a witch about to release a magical threat long trapped beneath an ancient temple, the two have no choice but to venture into the demon-haunted Worldwound in order to stop the disaster. Yet there’s more to the situation than either realizes, and neither fame nor redemption will matter unless they can first survive.

Based on the award-winning world of the Pathfinder Roleplaying Game.

With more than a million players worldwide, Pathfidner is the world's most popular tabletop RPG.

Richard A. Knaak’s Reaper’s Eye is pure action candy. It gives you a high while reading and you go from page to page, but in the end there’s just not a lot there. Is this a bad thing? I’m in the camp that not all books need to leave you weeping and staring off into the evening wondering if you’ll ever be the same again. Sometimes you just want to be entertained, laugh and forget the boring aspects of daily life, and this is where Reaper’s Eye lands perfectly.

I’ve read Knaak many times before and he knows what he’s doing in crafting a story with plenty of opportunities for action. In this one, we have Daryus Gaunt, a crusader on the run with his talking weasel Toy, and Shiera Tristane, an archaeologist who finds an old mysterious artifact that leads them on a adventure to stop a witch from unleashing the ultimate evil. The villain is a very standard villain in that he has an ego and wants to watch the world burn. Like I said, nothing new here plot-wise and frankly the characters don’t stand out as anything new either.

However, this small band of adventurers find themselves in plenty of entertaining and funny situations as they go about saving the world. Toy, the talking weasel, was by far the most fun part of the story, and frankly, I’d love to see him star in his own novel. I’d read that any day of the week.

Now, if you want to read something new, or experience something you’ve never read before, this is not for you. In fact, if you want characters with depth and multiple motivations, to help you learn something new about yourself, you won’t find it here. What you will find, if you allow it to and don’t expect an award nominee, is fun entertainment. There is minor violence and little to no language and adult situations, so it’s appropriate for teens and adults. Reaper’s Eye is your perfect go to escapism fantasy fiction.
Posted by Qwill at 6:30 AM