In CREATURE TECH, good battles evil, and the world hangs in the balance! Resurrected by the Shroud of Turin, the zombified Dr. Jameson sets out to finish what he started 150 years ago—destroying the earth with a giant space eel. Standing in his way is Dr. Ong, a would-be pastor-turned-scientist who now works in a government research facility infamously known as “Creature Tech.” Aided by an unlikely cast of rednecks, symbiotic aliens, and a CIA-trained mantid, Dr. Ong embarks on a journey of faith, love, and self-discovery.

All in a day’s work at Creature Tech!

“One of the best graphic novels ever made. A classic.” —Kazu Kibuishi (Amulet)

“CREATURE TECH is a beautiful, over-the-top, spiritual tale full of everything I love:
monsters, monsters, and monsters!” —Rob Schrab (SCUD: THE DISPOSABLE
ASSASSIN)

“[TenNapel’s] goofy, kinetic style (quite reminiscent of Will Eisner's) makes a winner out
of this crazed romp.” —Booklist

“I LOVE this book like I love breakfast burritos. It’s got everything: sci-fi, adventures, romance, kung fu, and even giant space eels!” —Jon Heder (Napoleon Dynamite) 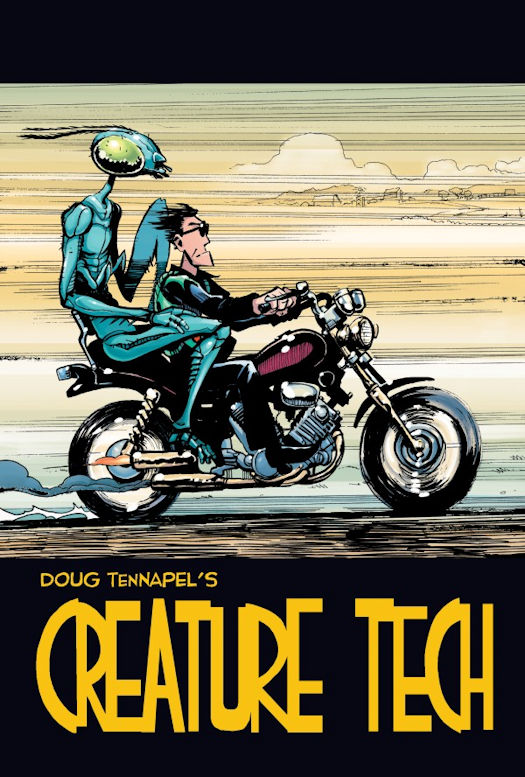 ABOUT IMAGE COMICS
Image Comics is a comic book and graphic novel publisher founded in 1992 by a collective of bestselling artists. Image has since gone on to become one of the largest comics publishers in the United States. Image currently has five partners: Robert Kirkman, Erik Larsen, Todd McFarlane, Marc Silvestri, and Jim Valentino. It consists of five major houses: Todd McFarlane Productions, Top Cow Productions, Shadowline Comics, Skybound Entertainment, and Image Central. Image publishes comics and graphic novels in nearly every genre, sub-genre, and style imaginable. It offers science fiction, fantasy, romance, horror, crime fiction, historical fiction, humor and more by the finest artists and writers working in the medium today. For more information, visit www.imagecomics.com.
Posted by Qwill at 6:03 AM