Please welcome Aliette de Bodard to The Qwillery. In the Vanishers' Palace is out today from JABberwocky Literary Agency.

Please join all of us at The Qwillery in wishing Aliette a Happy Publication Day! 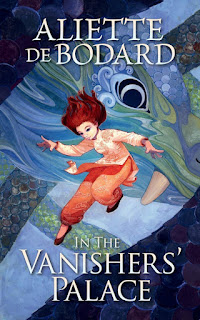 Aliette:  Hello and thank you for having me! My first fiction piece was an illustrated story about people going to rescue the daughter of the Cat Emperor of the Universe. I was 12 when I wrote it, and what I mostly remember is that the illustrations were terrible. I probably decided then and there that while writer might be a career for me, illustrator was definitely not.

Aliette:  I am most definitely a plotter. I just find it impossible to write anything if I don't have an idea of where it's going and how I get there. It gets worse for novels, where I need a detailed list of scenes and chapters and an order to them. I tend to do a big outlining phase that consumes about half my writing time for a piece, where I obsessively write the outline with a lot of details. Then I write pretty quickly after that. I'm not saying I stick to the outline, mind you! I certainly deviate from it quite significantly when I'm writing, but when that happens I'll stop and redo the outline rather than forge on, and only then will I continue writing.

TQ:  You've written (so far) 3 series - the Obsidian and Blood Trilogy, the Universe of Xuya, and the Dominion of the Fallen with the 3rd novel in this series out next year. Has you're writing process changed from when you wrote your first published novel to now?

Aliette:  I think the main way in which my process has changed is that I've accepted that I can be flexible with it? When I first started writing, the process was very much this lifeline I clung to. Having a detailed outline was the only thing that was going to prevent my novel from turning into a smoking crater, and if I even so much as slightly deviated from it I'd be lost. Now that I've got more books under my belt, I know that on some level I'm capable of making a novel and that it's not the end of the world if I don't exactly follow the outline. That said, I also know how much I can deviate from the process: I know that if I don't follow the outline at some point in the very near future I'll have to pause and re-plot, or I'll end up frustrated and unable to write!

TQ:  Your most recent work is In the Vanishers' Palace, which is a retelling of Beauty and the Beast. What attracted you to this fairy tale?

Aliette:  I've always been attracted to Beauty and the Beast. I think it's partly because the Disney version came out when I was a kid and was one of the first movies I can remember going to the theatre for, and partly because it's about love in spite of physical appearance, and love triumphing against all obstacles. It's a very old and very powerful tale. At the same time, while I love it to bits, I recognise that it's deeply problematic when it comes to consent: Beauty falls in love with her kidnapper and her jailer, and the huge power imbalance between them isn't ever really acknowledged. I wanted to retell this story, but in a way that would have a love story that was born of free will and where both parties respected the other's consent. I also wanted to bring into it the Vietnamese elements from my childhood, to make Beauty an impoverished scholar and the Beast a dragon spirit turned fearful and dark.

TQ:  Tell us something about In the Vanishers' Palace that is not found in the book description.

Aliette:  The eponymous palace, the one in which Vu Côn (the dragon) lives, was inspired by Escher's artwork. I wanted something creepy and dizzying, and I decided Escher was the perfect match. Every room in the palace, with their infinitely receding perspectives and their architecture where the reader is uncertain where up, down or sideways are, is inspired by one or two different pieces of Escher's.

TQ:  What sort of research did you do for In the Vanishers' Palace?

Aliette:  I did a lot of research on Escher (obviously!), on Vietnamese folklore and in particular the traditional tales involving dragons. A bunch of research also went in medicine, because several of the main characters are healers, and the world it's set in is one where random plagues abound, and obviously I needed to make up some plausible diseases people could catch. I also looked into Traditional Chinese/Vietnamese medicine.

TQ:  Please tell us about the fabulous cover for In the Vanishers' Palace.

Aliette:  The cover was painted by Kelsey Liggett, and designed by Rhiannon Rasmussen-Silverstein and Melanie Ujimori. It doesn't depict something from the novel, but rather its overall mood. The main character Yên, my impoverished scholar, is seen wearing an áo dài, a traditional Vietnamese tunic: we picked peach as a colour because it had a nice contrast with the background and it was warm (it's also a very traditional female colour). In background, you see the dragon, Vu Côn--I really like that she's this huge, enormous, threatening shadow, because that's how Yên starts out as perceiving her, before realising there's more to her than meets the eye. But at the same time the huge dark dragon symbolises the darkness at the heart of the tale, and the dangerous secrets in the palace that Yên will have to face, so it's very fitting, in more ways than one, that she's falling through the dragon's coils.

TQ:  Does In the Vanishers' Palace touch on any social issues?

Aliette:  I didn't mean to touch on any social issues: I basically wrote this book because I wanted to write something that would make me happy and that would be welcoming to my friends. But of course writing is always a political act, and writing a book in which the main characters are two queer Vietnamese women falling in love with each other, and which has several supporting non-binary characters, is not neutral. It says something about which people are being allowed happiness, being allowed escape, being allowed their own stories; and it's a statement all of its own!

TQ:  Which question about In the Vanishers' Palace do you wish someone would ask? Ask it and answer it!

Aliette:  How did you work out the magic system?

The magic system in In the Vanishers' Palace is language-based, which sounds simple but actually gave me quite a large headache. It's not only language-based, but it's also writing based: magicians need to have the right words and then to write them down (whether in a circle or in the air) before anything happens. It's based on literary allusions, which means that you have to be fairly fluent in poetry and stories before you can put things together: for instance, the words used to summon the dragon, "Fish, River, Gate, Storm", come from a story in which carps leap through a gate located at the top of a waterfall and transform into dragons (who are river and storm spirits).

One of the questions I had to deal with was what form the writing should take, and it wasn't an innocuous one. Vietnamese is written today with an alphabet, but the archaic form of the language used Chinese characters (as in, actual characters taken from Chinese in the days of Chinese domination of Vietnam). In the first version I wrote, the more archaic versions of the magical language used characters, and then I realised that I was erasing the Vietnamese language as it is now, and implying that anything magical was really Chinese, which is a unsatisfactory way of handling things. So I ended up giving everyone a different alphabet: there's one for the mortals and one for the spirits, and a really weird one for the departed race, the Vanishers, one that few people can read anymore.

TQ:  Give us one or two of your favorite non-spoilery quotes from In the Vanishers' Palace.

"Something pushed from beneath the water—emerging, lithe and sinuous, a huge, serpentine body, translucent stubs of antlers with the same glow as the moon’s—a mane, scattering droplets of river water as the dragon shook herself, her roar the thunder of a storm that stripped leaves and bark from the trees."

"Because she had to, Yên looked up; and down again, quickly, before she could be overwhelmed. The room stretched and twisted. Rivulets of water ran down on either side of the path leading to the throne where Vu Côn sat, gradually gathering to become a huge river that climbed over the throne and then fell back behind it, a soundless, impossible waterfall. But the rivulets went on and on, receding into the distance and forming another, farther-away waterfall falling on an empty throne, and on and on, repeating without any sign that this pattern ever ended."

Aliette:  I'm going to be a guest at World Fantasy at the end of the month, where I'll be talking safe havens in storms and all things fantasy. Bookwise, I'm working on book 3 of Dominion of the Fallen, which will wrap up the series. It'll be set in the same dark Gothic devastated Paris, and focus on House Harrier, which is a snobbish House divided by class, and which runs into troubles of its own after a mysterious magical explosion. After that I'll be tackling a space opera set in my Xuya universe (which is a galactic empire based on Vietnamese culture, with spaceships who are part of families).

Aliette:  Thank you very much for having me! Honoured. 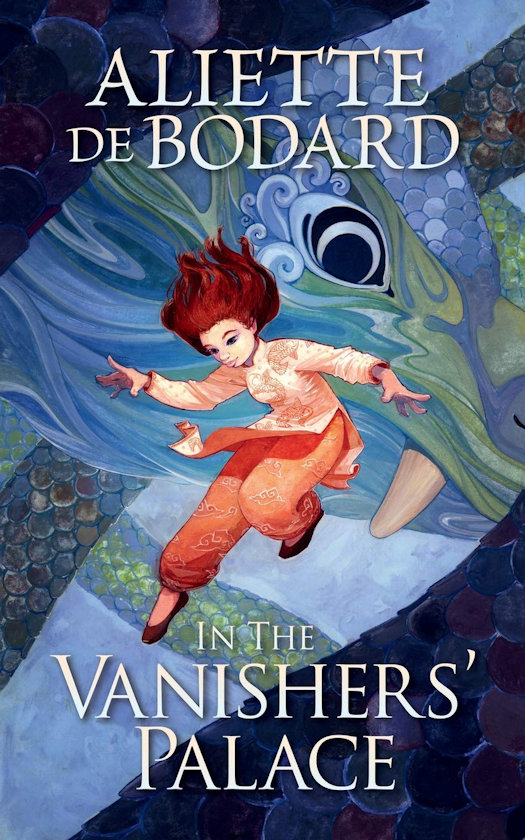 From the award-winning author of the Dominion of the Fallen series comes a dark retelling of Beauty and the Beast.

In a ruined, devastated world, where the earth is poisoned and beings of nightmares roam the land...

A woman, betrayed, terrified, sold into indenture to pay her village's debts and struggling to survive in a spirit world.

A dragon, among the last of her kind, cold and aloof but desperately trying to make a difference.

When failed scholar Yên is sold to Vu Côn, one of the last dragons walking the earth, she expects to be tortured or killed for Vu Côn's amusement.

But Vu Côn, it turns out, has a use for Yên: she needs a scholar to tutor her two unruly children. She takes Yên back to her home, a vast, vertiginous palace-prison where every door can lead to death. Vu Côn seems stern and unbending, but as the days pass Yên comes to see her kinder and caring side. She finds herself dangerously attracted to the dragon who is her master and jailer. In the end, Yên will have to decide where her own happiness lies—and whether it will survive the revelation of Vu Côn’s dark, unspeakable secrets...