Please welcome Peter McLean to The Qwillery. Priest of Bones, the first novel in the War for the Rose Throne, was published on October 2nd by Ace. 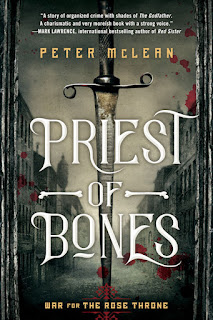 Peter:  Peaky Blinders with Swords. There, that’s only four words! Joel Cunningham at Barnes & Noble came up with that when they hosted the online cover reveal, and it’s absolutely perfect.

TQ:  In our first interview (back in 2016) you said that the most challenging thing for you about writing was "Simply making the time to do it is always the hardest thing." Is this still the case or have new challenges cropped up?

Peter:  Yes and no. I had eighteen months off between leaving one day job and starting another, which gave me a ton of time to work (the second book, Priest of Lies, is already done!) but I’m now back at work during the days again, so I’m once more burning the candle at both ends. It’s manageable though, I find I just have to choose what I don’t do in order to make time for writing. I barely watch TV any more, for example, and nights out have definitely become a thing of the past. Writing is one of those things that, if you really want to do it, you’ll find the time somewhere. I know people who get up to write at 5am every day before their families wake up, for example, and people who write on their lunch breaks at work. The time is always there, it’s just up to you how you choose to use it.

TQ:  Your first series, The Burned Man series (Drake, Dominion, and Damnation), is Urban Fantasy. Priest of Bones is described as "...a fresh and compelling take on grimdark fantasy." While The Burned Man series was often grim and dark it could not be called grimdark. What drew you to writing grimdark? What is "grimdark" in your opinion?

Peter:  Oh boy, I’m not even sure of the answer to that myself. I don’t really think anyone outside of the Warhammer community (where the term originated) really agrees on what “grimdark” means. For me, at least, it’s about morally ambiguous characters, about everyone thinking they’re doing the right thing and usually being wrong, and about consequences. One of the key signatures of books commonly regarded as grimdark is that actions have consequences. Wounds get infected and go bad, soldiers get dysentery on campaign, good people die unexpectedly, and war leaves mental as well as physical scars. In those respects I suppose you could say it’s more “realistic” than traditional high fantasy where you often find instant healing spells and so forth, but it’s not just that. There’s an aesthetic to it too, a grime that speaks to the noir-lover in me. I can’t see myself ever writing about singing elves and happy unicorns, if you know what I mean.

TQ:  Are there any themes that Priest of Bones shares with The Burned Man series?

Peter:  Yeah, definitely. Childhood trauma and parent issues seem to be two of my recurring themes whatever I’m writing, and both Don Drake and Tomas Piety are the products of abusive upbringings. There’s the criminality too, of course. Don Drake from The Burned Man was basically a hitman, at least to begin with, and Tomas Piety is a gangster. Both are trying to do good, to be better men, but sometimes that’s easier said than done. Both series are set amongst the lower classes of their worlds, too; even when I’m reading history, I’m infinitely more interested in how cobblers, bakers, seamstresses and soldiers lived in a given time than I am in royalty or dukes and duchesses. I always think people’s actions and decisions are more interesting when they’re influenced not simply by what they perceive to be right, but also by how they’ll get to eat that day.

TQ:  You've set Priest of Bones sort of in the Tudor period. What appeals to you about this particular historical period?

Peter:  I knew I wanted my broken soldiers to be haunted by the noise of the cannon, in a nod to the heroes of the First World War, so I decided to set the story in an analogue of the Tudor period rather than the more ubiquitous “Medieval fantasy era”, which is never particularly Medieval anyway. Also I wanted Ellinburg, where the book is set, to be a filthy industrial city, with lots of heavy manufacturing. I didn’t want to go steampunk with it, but there are a lot of factories powered by waterwheels which I think fit better in a later-feeling setting.

TQ:  In Priest of Bones who was your favorite character to write and why? Which character has given you the most trouble and why?

Peter:  Bloody Anne is far and away my favourite character. Like the very best characters, she just sort of arrived in my head one day, fully formed and generally causing trouble, demanding to be written. She fascinates me because she functions as Tomas’s conscience, something he’s personally lacking to a large degree. Their relationship is purely platonic but there’s definitely a love between them, and a deep well of mutual respect.

I think in a way Tomas himself was probably the most difficult – with a first person narrator you’re obviously much deeper in that character than any of the others, and Tomas is a complicated man. He just arrived too, but he was much harder to get into the head of than Anne. He’s a ruthless, manipulative businessman out for himself and a natural leader, but at the same time he genuinely cares for his people and his streets, the place where he came from. He grew up dirt poor on those streets, abused and with no prospects. He’s a completely self-made man with big political ambitions and bigger problems, who gets swallowed up by events beyond his control and has to do what he can to make the best of it. He’s a man of contradictions, priest and executioner both. While he is enormously fun to write about it’s a big character to wrap around myself, and not always a comfortable head to live in while writing him.

TQ:  Please tell us about the cover for Priest of Bones.

Peter:  I absolutely love the cover, Ace really did me proud there. It was designed in-house at Berkley by Katie Anderson, combining the photograph of the sword by Jelena Jovanovic with Slava Geri’s street scene. The US trade paperback has a gorgeous textured finish too, while the UK edition from Jo Fletcher Books has a slightly different design but the same image, and will be a my first hardcover release.

TQ:  Please share with us one or two of your favorite quotes from Priest of Bones.

“My weapons are gold and lace, and paints and powders. And the dagger, when it’s needed. You can hide a dagger very well indeed, behind enough lace.”

When people have run out of food, and hope, and places to hide, do not be surprised if they have also run out of mercy.

Peter:  Next is the second book in the series, Priest of Lies, due out next July. Without giving too much away, you’ll see savage gang warfare, visit Dannsburg, see the imposing House of Law and the terrible House of Magicians, and discover what happens when a man who lives by his brutal reputation finds himself thrown into the merciless arena of royal politics in a city where that reputation simply doesn’t exist.

And that’s without what the Queen’s Men have planned for him.

TQ:  Thank you for joining us as The Qwillery!

Peter:  Thank you for having me! 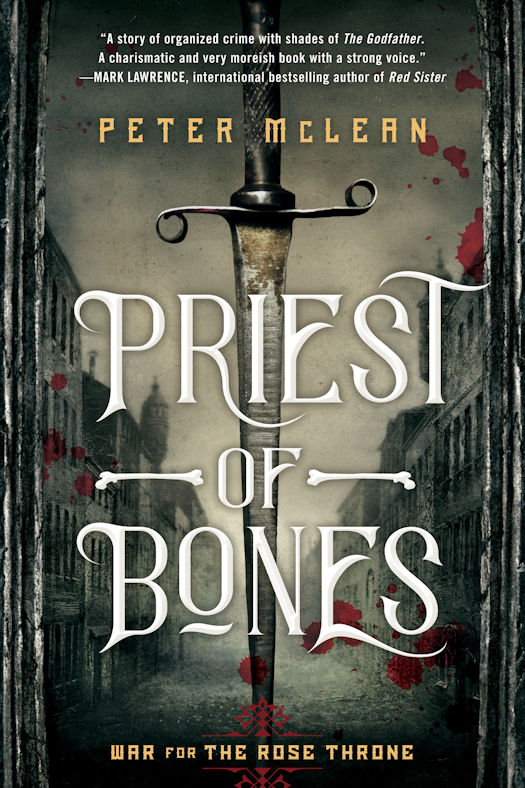 “The first in an unmissable series, Priest of Bones is a fresh and compelling take on grimdark fantasy. Mashing together soldiers, gangsters, magic and war into a heady mix that is a hulking big brother to The Lies of Locke Lamora.”–Anna Stephens, author of Godblind

The war is over, and army priest Tomas Piety heads home with Sergeant Bloody Anne at his side. But things have changed while he was away: his crime empire has been stolen and the people of Ellinburg–his people–have run out of food and hope and places to hide. Tomas sets out to reclaim what was his with help from Anne, his brother, Jochan, and his new gang: the Pious Men. But when he finds himself dragged into a web of political intrigue once again, everything gets more complicated.

As the Pious Men fight shadowy foreign infiltrators in the back-street taverns, brothels, and gambling dens of Tomas’s old life, it becomes clear:

The war is only just beginning. 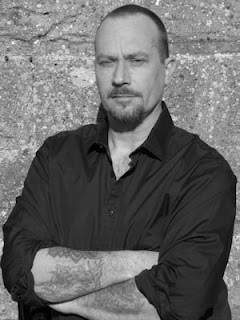 Peter McLean lives in the UK, where he studies martial arts and magic, and volunteers at a prison, teaching creative writing. He is the author of the Burned Man urban fantasy series.