Spotlight and Giveaway - The Sacred Hunt Duology by Michelle West


Hunter's Oath, the first novel in the Sacred Hunt epic fantasy series by Michelle West, was originally published in 1995. Hunter's Death followed in 1996. On August 2nd, DAW will publish The Sacred Hunt Duology collecting both novels in a beautiful new edition. 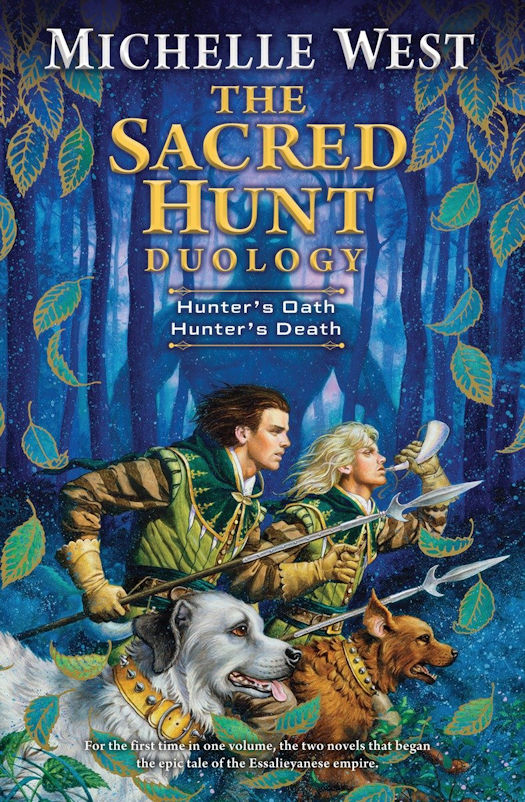 The Sacred Hunt the first time the duology Hunter's Oath and Hunter's Death, by bestselling author Michelle West, will be available as a single volume.

HUNTER'S OATH
When the covenant was made with the Hunter God, it ensured that the Hunter Lords, their land, and their people would prosper. But in payment, once a year the Sacred Hunt must be called, in which the God's prey would be one of the Lords or his huntbrother. This was the Hunter's Oath, sworn to by each Lord and his huntbrother. It was the Oath taken by Gilliam of Elseth and the orphan boy Stephen--and the fulfillment of their Oath would prove the kind of destiny from which legends were made...

HUNTER'S DEATH
The Hunter Lord Gilliam and his huntbrother Stephen must travel to Averalaan, a city once ruled by the Lord of Hell himself, the Dark Lord who once again seeks to impose his reign over the mortal lands. And only Stephen, Gilliam, Espere, and the seer Evayne stand any chance of saving the world from this most evil of fates.

Michelle West is the author of three interconnected series: The Sacred Hunt duology, the six-volume Sun Sword series, and The House War novels. She has published numerous short stories and fantasy novels under her maiden name, Michelle Sagara. She was a two-time nominee for the Campbell Award. She works part-time at BAKKA Books, one of Toronto’s larger bookstores, and writes a column for The Magazine of Fantasy & Science Fiction. She can be contacted via her website, michellesagara.com.

What:  Two entrants will each win one copy of The Sacred Hunt Duology by Michelle West from the publisher. US / CANADA ONLY

Who and When:  The contest is open to all humans on the planet earth with a US or Canadian mailing address. Contest ends at 11:59 PM US Eastern Time on August 10, 2016. Void where prohibited by law. No purchase necessary. You must be 18 years old or older to enter.