Please welcome Foz Meadows to The Qwillery. An Accident of Stars, the first novel in the Manifold Worlds series, was published on August 2nd by Angry Robot Books. 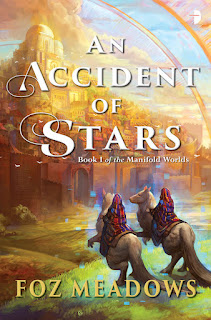 Nearly ten years ago, which is to say – ye, gods! – in 2008, there was a furore in the publishing world over age banding on children’s books. The idea was that books aimed at teens and children would list a “suitable age” on the cover – ages 10+, for instance – to provide a better idea of both the intended audience and the book’s contents. Understandably, this proposal was met with stern resistance from authors, librarians, reviewers and readers alike, and as best I can tell seems never to have come to pass. However well-intentioned the idea itself, the execution could only have been needlessly prescriptive, for the simple reason that children, like adults, are not a hivemind. A book that terrifies one child of ten might endlessly delight another, while a story too complex for a particular fourteen-year-old might be just the thing for their precocious younger sibling. As far as reading age goes, it’s horses for courses – and yet we have an entire genre casually designated on the basis of its (intended, but by no means exclusive) readership: YA.

YA, in its current incarnation, is very much a recent invention: novels explicitly written both for and about teenagers. But even though it’s easy enough to say, that dual qualification – the for and about – is itself a key source of tension in how the genre is viewed, for the simple reason that certain portrayals of teenage life, no matter how honest or accurate, are held to be unsuitable for teenage consumption. As adults, we are endlessly concerned with what’s “appropriate” for young people, and while those conversations can and do have merit, particularly in discussing the collective narrative representations of wider sociocultural trends, they ultimately dovetail with the same problem as age banding: that not every teenager needs or wants or is interested in the same things.

That being so, it’s extremely difficult to talk about the ambiguity of the intended age range for a given book without simultaneously picturing a type of reader, regardless of whether we’re aware that’s what we’re doing. In those moments, I tend to feel like a doubled person: as someone who’s pro-YA – and, indeed, a YA author – the intensity of Lovejoy* moralising surrounding the genre frequently reduces me to headdesk and invective, especially when it comes from outside sources; but as someone who passively absorbed and thereby internalised a great deal of toxic bullshit from the books I read as a teenager, messages that had a direct influence on my beliefs and actions at that age, I don’t think it’s sensible or wise to waive all age-based criticism. As a writer, I fervently believe that stories have an impact on the world: that their ability to leave an impression, whether positive or negative, is precisely the reason they matter. This is why I’m an advocate for diversity and greater representation, and as such, it would feel deeply hypocritical to claim on the one hand that specific groups can be buoyed or harmed by the prevalence of particular tropes, stereotypes or stories, and then to say on the other that stories aimed at a specific group – which is to say, at a diversity of teenagers – are somehow immune to this criticism.

An Accident of Stars is a book with four POV protagonists, three of whom are adolescents, one of whom is an adult in her fifties. Whether that makes it YA or not seems largely to be a matter of Your Mileage May Vary: some find it to be so, and others don’t. In writing it, I was more concerned with telling a story that interested me than in tailoring it to an age bracket – which isn’t, I hasten to add, because I have any problem whatsoever with authors aiming to please a target audience. Rather, it’s a reflection of the fact that my own adolescence is still a liminal thing to me, both a finished experience and an ongoing experiment in consequences. More than a decade after I officially graduated from Teenager to Ostensible Adult, I’m still in dialogue with my younger self: I understand her now in ways I didn’t then, and that’s a fascinating sort of time-travel power to have. The teenagers in An Accident of Stars are born of that self-reflection. Whether that makes them more engaging to adults or teens is an open question – and whatever you think of the story, I’d be interested in your answer. 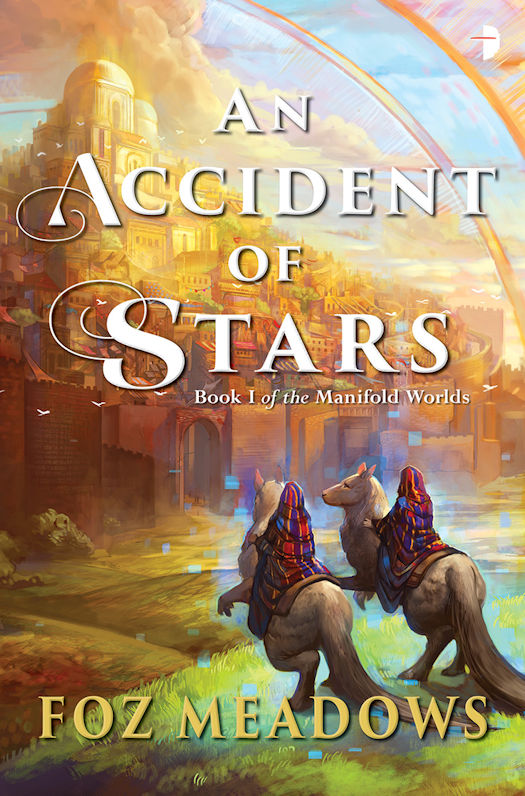 When Saffron Coulter stumbles through a hole in reality, she finds herself trapped in Kena, a magical realm on the brink of civil war.

There, her fate becomes intertwined with that of three very different women: Zech, the fast-thinking acolyte of a cunning, powerful exile; Viya, the spoiled, runaway consort of the empire-building ruler, Vex Leoden; and Gwen, an Earth-born worldwalker whose greatest regret is putting Leoden on the throne. But Leoden has allies, too, chief among them the Vex’Mara Kadeja, a dangerous ex-priestess who shares his dreams of conquest.

Pursued by Leoden and aided by the Shavaktiin, a secretive order of storytellers and mystics, the rebels flee to Veksh, a neighboring matriarchy ruled by the fearsome Council of Queens. Saffron is out of her world and out of her depth, but the further she travels, the more she finds herself bound to her friends with ties of blood and magic.

Can one girl – an accidental worldwalker – really be the key to saving Kena? Or will she just die trying? 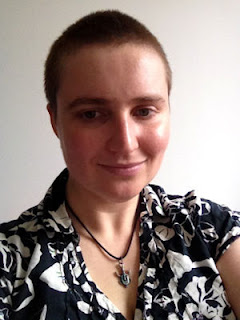 Foz Meadows is a genderqueer author, blogger, essayist, reviewer and poet. In 2014, she was nominated for a Hugo Award for Best Fan Writer for her blog, Shattersnipe; she is also a contributing writer for The Huffington Post and Black Gate, and a contributing reviewer for Strange Horizons and Tor.com.

You can find Foz online at fozmeadows.wordpress.com, and on Twitter @fozmeadows.