Please welcome Lian Hearn to The Qwillery. Lian writes The Tale of Shikanoko series (among others) and has a short story in the upcoming Hath No Fury anthology, which will be published by Ragnarok Publications. The Kickstarter for Hath No Fury may be found here. Check out the fabulous author list on Kickstarter. (Note: I'm a backer!)

Hath No Fury is a collection of fantasy, science fiction, and urban fantasy tales by some of the leading proponents of female characters in the industry. These stories feature leads inspired by women from literature, history, and film—exciting and intriguing characters in the vein of Ellen Ripley, Lara Croft, Joan of Arc, Marvel’s Black Widow, La Femme Nikita, Katniss Everdeen, Hermione Granger, and Furiosa. ~ from the Kickstarter 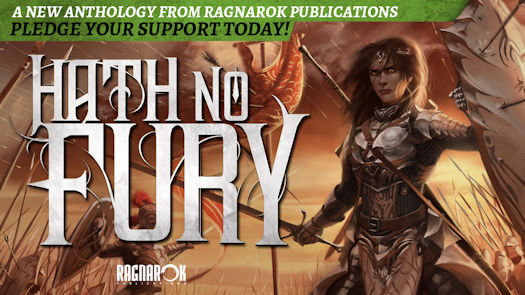 Masachika in Autumn Princess, Dragon Child. The Tale of Shikanoko


My latest novel, The Tale of Shikanoko, like the Tales of the Otori, is set in a feudal world based on medieval Japan. Over the years I’ve explored the tension that lies between being true to history and writing for modern audiences who expect their female characters to have power and self-determination. However, even when women appear to be completely submissive in a culture, that is never the whole story. Because sexual desire lies at the basis of all human history, there are always some considerable powers that women can wield.

When I was a child almost all my favourite books had male heroes. I identified with them and was always a boy in my make believe stories and games. I was like George in the Famous Five. I could hardly imagine what it would be like to grow up as a woman.

The Snow Queen by Hans Christian Andersen made a deep impression on me. The boy, Kay, becomes mean and cruel but Gerda’s love and innocence save him. This is a recurring pattern in Western folk tales but not one that I was particularly comfortable with. I admired Gerda’s courage and perseverence, but the character that really captured my imagination was the Little Robber Girl. She not only did exactly what she wanted but she carried a weapon and owned a reindeer. Perhaps this gave me an inkling that there were other tribes and other ways of life where women and girls had power.

In Japan I have fairly often come up against the problem of pollution. I have been told I can’t listen to male monks chanting or I can’t walk on a certain mountain path because I am a woman. Shinto is a religion obsessed with purity and cleanliness, and even though the foundation goddess Amaterasu is female, childbirth and menstruation, as well as death, are considered polluting. This is a belief echoed all over the world and to me it is the supreme example of human wrong thinking. The gift of life is carried within a woman’s body. Women are expected to receive the penis with its dangerous, life threatening, life changing cargo. Childbirth is a far more arduous, painful and risky business than most men will ever experience. As any one who’s had to clean up after them knows, men and boys can be gross and smell vile, yet what comes out of them – piss, shit,sweat, snot, vomit – is common to all humans, and non human animals too. Is it any less polluting than menstrual blood? Women’s blood should be worshipped if we are going to worship anything – it is what gives every one of us life. It is not Christ’s blood that streams in the firmament, it is woman’s.

My story in Hath No Fury in set in an area of lagoons around the mouth of the River Murray in South Australia called the Coorong. For many years I explored it by kayak and came to know it well. It’s a moody and unpredictable landscape, inhabited by thousands of shore birds whose arrivals and departures signify the changing seasons. Some come from Northern Siberia, some from Hokkaido where there are Ramsar wetlands - protected sanctuaries as the Coorong is. Nevertheless Australia has lost 50% of its natural wetlands. The birds are on the verge of extinction because their way stations in China, South Korea andVietnam, have been destroyed by land reclamation and pollution. A pattern of migration that has been in place for hundreds of thousands of years will soon be no more. We have simply no idea what this will do to all the interlocking ecosystems. Meanwhile we exist in a state of mourning for the vanishing.

In the Coorong the weather can change in the blink of an eye. You learn to be very sensitive to small signs in wind and water. Perhaps the germ for the story came from an encounter with two men in a small boat with an outboard. The tide was going out and we could see they were about to run aground. We called to warn them, but they did not want to listen to two old women.

In my books I try to suggest that what is needed in male-female relationships is the balance that comes from true equality, the yin and yang essence that underpins the universe. Like the soul within each of us, the writer has no gender. We are all made up of ‘male’ and ‘female’ attributes. Our overcrowded panic-stricken, status obsessed world shows all the symptoms of unbalanced masculinity, with its violence, gun culture, pornography and denial of women’s rights. Everyone is striving to hang on to their fragile position.

Samurai culture has some similarities to the ideals of chivalry: the cultivation of respect, loyalty, self-control, humility, courage: all the qualities that make up character. Yet it can also be distorted into a hypermasculinity with its cult of death, its misogyny and its fetishisation of the sword. My story is about the clash of a man from that culture, cast adrift in a timeless feminine landscape where women have the status more often accorded to men. But no culture is ever static; they are always changing and being reshaped, often by one individual act, in this case subverted by passion, tenderness and pity.