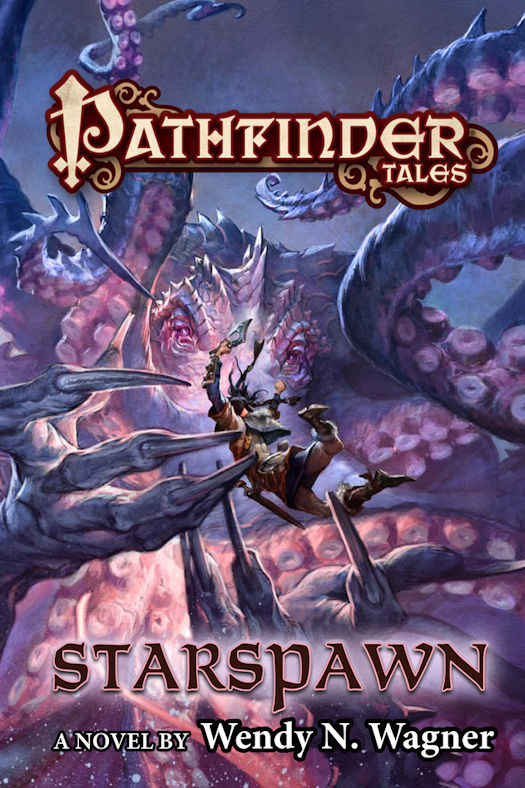 Paizo Publishing is the award-winning publisher of fantasy roleplaying games, accessories, and board games. Pathfinder Tales: Starspawn is the latest in their popular novel series.

The sequel to Hugo Award Winner Wendy N. Wagner’s Skinwalkers! Once a notorious viking and pirate, Jendara has at last returned to the cold northern isles of her home, ready to settle down and raise her young son. Yet when a mysterious tsunami wracks her island’s shore, she and her fearless crew must sail out to explore the strange island that’s risen from the sea floor. No sooner have they arrived in the lost island’s alien structures, however, than they find themselves competing with a monstrous cult eager to complete a dark ritual in those dripping halls. For something beyond all mortal comprehension has been dreaming on the sea floor. And it’s begun to wake up...

I'm back! I know I know all of my ones of fans have been crashing the site begging me to write a new book review, so thanks to Floyd in Briar Hook, Delaware for sending all of those emails and for your trailblazing social media campaign. Much love.

Starspawn by Wendy N. Wagner was the best book for me to read to get me back into reviewing. It has pirates, natural disasters, a mysterious island crawling with all kinds of half-man, half-fish creatures. A Lovecraftian monster, treasure hunting, battles, creepy crawlies and even a dolphin being sacrificed to a dark god by the deep ones. I mean really!? What more could I want in one book. Nothing that's what. Now, lets get into the juicy bits.

The protagonist is Jendara, an ex-pirate mother of a mute son named Kran who's married to Vorrin, the captain of the pirate ship Milday. Jendara was in a previous book entitled Skinwalkers, also by Wagner. There are several mentions of past adventures that took place last year, which I assume is from the first book, but thankfully I never felt lost in this book. I was able to enjoy the current adventure without needing to go grab a copy of Skinwalkers, but if you're like me, you will want to read more about this crew. All right, back to Jendara. She's a very nice character: a strong woman, mother, wife and adventurer. Wagner did a great job balancing all the sides of this character and in the end helped her feel completely real and relatable.

The story starts off simple enough with Jendara and her son Kran on an island in an archipelago, when a tsunami hits and destroys most of her village. Right after the event, her husband and his crew of pirates arrive to offer aid, and explains that an island has risen out of the sea nearby and is covered in ruins and riches. Jendara and her son join the crew on a quick treasure hunt/exploration of the new island in hopes of using it to help the islanders recover from the tsunami. The rest of the story takes off from there. Kran and Vorrin both get enough time on the page to get a sense of their characters, but there isn't a lot of detailed information given. I truly believe these bases were covered in the first book along with the rest of the crew, which didn't bother me a bit. I had enough information about each supporting character that the story warranted. The island itself is the antagonist of this story with plenty of different creatures and groups causing problems for the crew. We get hints to this island's past, but a lot of it was left hidden, which added to the mystery.

Wagner knows how to weave a story. Everything starts off nice and calm, and then wham!, the action starts and it doesn't let up. She threads in plenty of mystery about the island, the people found there and their intentions. We're left to wonder about several different character's fates as the party explores the island. Wagner colors the story with just the right amount of humor to keep things from getting too dark and stressful, but doesn't ruin the overall mood.

My only complaint would be by the ending of the book there were five different groups on the island, including the crew, and I didn't feel I got enough of an explanation about the motives and means of each of the groups. Now, that's not saying the ending is unsatisfying or rushed. I just wish I knew a little more. Wagner gives different levels of information about each group so this is a sliding scale. Not withstanding this one issue, I still thoroughly enjoyed the book. You don't always need to know everything to enjoy a book.

Starspawn is the type of book that brings out the kid in me. There's so much going on and written in such a way that each event builds on top of the other creating a crazy ride. It's books like this one that remind me why I love fantasy and renew my love for the genre. Just knowing there are authors out there writing books like this will keep me young at heart forever. For those of you who would like to know, there is violence and minor language. I would recommend it to teens and adults. 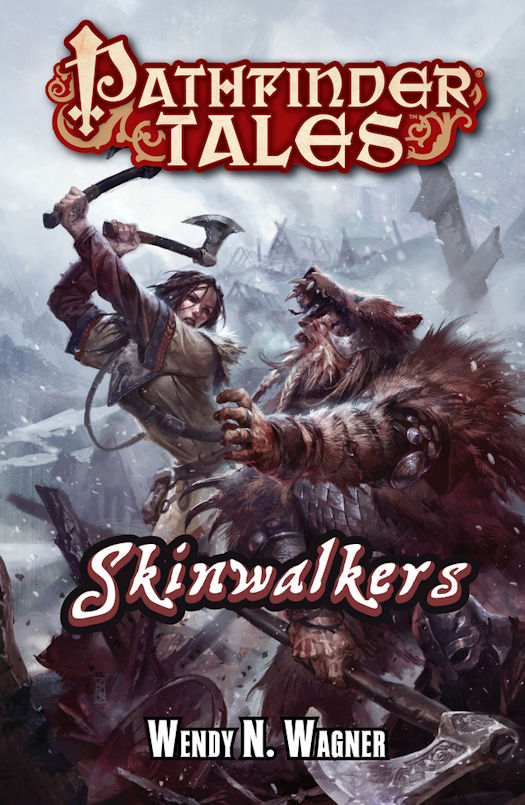 As a young woman, Jendara left the cold northern isles of the Ironbound Archipelago to find her fortune. Now, many years later, she's forsaken her buccaneer ways and returned home in search of a simpler life, where she can raise her young son, Kran, in peace. When a strange clan of shapeshifting raiders pillages her home, however, there's no choice for Jendara but to take up her axes once again to help the islanders defend all that they hold dear.

From author Wendy N. Wagner comes a new adventure of vikings, lycanthropes, and the ties of motherhood, set in the world of the Pathfinder Roleplaying Game.