Please welcome Anise Eden to The Qwillery. All the Wounds in Shadow, the 2nd Healing Edge novel, is published on August 23rd by Diversion Books. Please join The Qwillery in wishing Anise a Happy Publication Day! 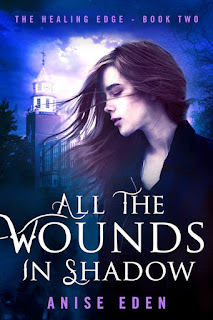 Anise:  According to my parents, I began telling stories when I was two years old, including “some real whoppers.” I started writing my stories down in elementary school, and kept that up until adulthood arrived and demanded all of my creative energy. Several years later, I had to take some time off to recover from an illness. It was a new experience for me, having nothing to do and nowhere to go. Into that void, the urge to write pressed itself with great urgency, as though it had been waiting patiently in the background and finally sensed its opportunity. That’s when I began to write The Healing Edge series.

Anise:  I’d say I’m a hybrid with strong pantser leanings. My characters come to me first. Then I develop the plot in broad brushstrokes. As I write, the characters and I work together to fill in the details. In the drafting stage, the plot can take some pretty dramatic twists and turns, but the overall arcs of the story and character development tend to remain unchanged.

The most challenging thing about writing for me is coming up for air. When I’m writing, I’m completely immersed in the story and the characters, and it’s difficult to completely disconnect from that world. Some part of my mind is always occupied with my work in progress; it’s like a musical soundtrack playing, or a computer program running in the background. Fortunately, my family and loved ones are very understanding, and they take my distractibility chronic preoccupation in stride.

TQ:  Describe All the Wounds in Shadow in 140 characters or less.

Anise:  A gifted empath and her boss, a Marine veteran, try to shelve their attraction while solving a murder & confronting their deepest wounds.

TQ:  Tell us something about All the Wounds in Shadow that is not found in the book description.

Anise:  One of the main themes is how true love can overcome all obstacles—even death.

TQ:  What inspired you to write The Healing Edge series?

Anise:  I’ve always been interested in how people experience paranormal phenomena in their daily lives. As a big Patricia Arquette fan, I was binge watching old seasons of the TV show Medium when I began to wonder about the origins of abilities such as telepathy and communicating with the dead. What is the purpose of these gifts, and how and when did they first arise? I decided to invent my own science fiction-style theory, which became the Bronze Age spiritual origins theory introduced in All the Broken Places (The Healing Edge, #1). Then characters began to form in my mind and speak to me, and the story took off from there.

TQ:  What sort of research did you do for the series?

Anise:  Some of my research was done before I even had the idea for the series. For example, I’ve had experience with acupuncture and Reiki. But I had a lot to learn about many other subjects, such as modern day archaeology, the National Institutes of Health, and the medical aspects of being in a coma. To research those topics, I sought out authoritative and reputable sources online. To get a better feel for life in the Marine Corps, I checked out military websites and read Rule Number Two: Lessons I Learned in a Combat Hospital by Heidi Squier Kraft. I’m also blessed with family and friends who are experts in a variety of fields, and who generously allow me to pick their brains.

TQ:  In All the Wounds in Shadow, who was the easiest character to write and why? The hardest and why?

Anise:  The easiest character to write was the Brazilian neuroscientist, Braz. He has a distinctive personality and a strong voice that spoke to me very clearly. The most difficult character to write was probably Captain Abbott. While he also has a strong voice, as a military leader, his way of thinking is quite different from mine, so I had to really focus and draw upon my research to get inside of his head.

TQ:  Which question about All the Wounds in Shadow or The Healing Edge series do you wish someone would ask? Ask it and answer it!

Anise:  Why did you choose to make your heroine, Cate, an empath?

I believe that the ability to be empathic is a key component to healing the wounds in ourselves, in one another, and in our larger communities. However, people with the capacity for great empathy often find that their gift is undervalued, and they are even criticized at times for being “oversensitive” or “bleeding hearts.” In The Healing Edge series, Cate not only shows how precious and useful empathy can be, but also demonstrates that individuals with this gift have unique self-care needs that must be respected in order for them to thrive and use their empathic traits most effectively.

TQ:  Give us one or two of your favorite non-spoilery quotes from All the Wounds in Shadow.

Without that information, we couldn’t deal with his killer—not to mention the mysterious dark armies Eve had seen in her vision.

Anise:  Right now I’m putting the finishing touches on the third book in The Healing Edge Series. It’s called All the Light There Is, and it is coming out in early 2017. This third book ties together the loose threads from the first two books in exciting and unexpected ways, and the relationship between Cate and Ben finally reaches a tipping point. I can’t wait to share it with readers!

Anise:  Thank you so much for having me. It’s been a pleasure!


All the Wounds in Shadow
The Healing Edge 2
Diversion Books, August 23, 2016
Trade Paperback and eBook, 248 pages 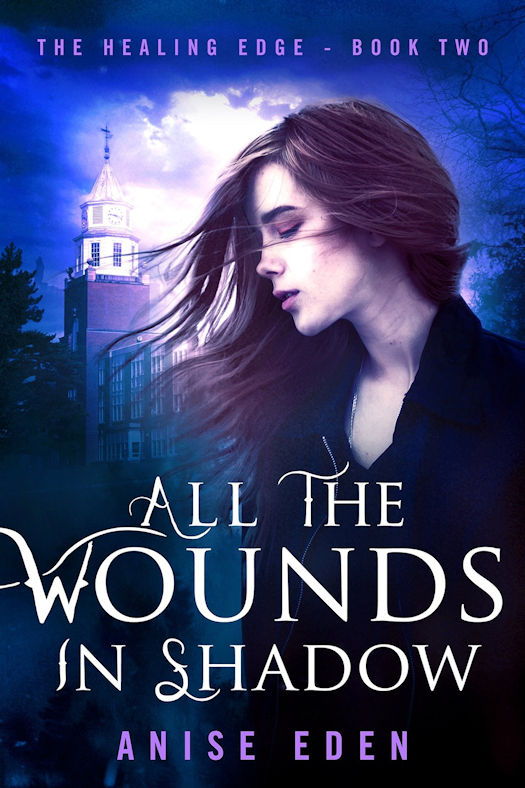 For fans of Karen Robards and Shiloh Walker, Anise Eden brings us the mesmerizing sequel to her paranormal romantic suspense novel All the Broken Places.

"Peopled with engaging characters and filled with intrigue, this book will delight readers of paranormal romance. This series occupies a special place at the top of my favorites list and I can't wait to see what Ms. Eden brings us next."—Rosanna Leo, author of the Gemini Island Shifters series

Therapist Cate Duncan has just accepted a job with the MacGregor Group, a unique collective of alternative healers. She’s excited by the prospect of honing her empathic healing techniques among others like herself—aura readers, telepaths, crystal healers, and more. The fact that Cate just started dating Ben, her magnetic new boss, is an added bonus.

Before Cate can settle into her new routine, the poisoning of a prominent neuroscientist draws the entire MacGregor Group into both a federal investigation and an even more insidious threat. Protected by Ben’s former Marine Corps unit, Cate and her colleagues must use their alternative healing methods to solve the crime as their patient clings to life. The responsibility of discovering crucial information falls to Cate and her parapsychological powers.

But for Cate, unraveling the mystery means reopening wounds that had just begun to heal—and in the environment of the Marine Corps unit, differences between Cate and Ben become clearer, straining their budding romance. When a new crisis looms, Cate must trust in her colleagues’ gifts and the strength of Ben’s love, finding the courage to confront her deepest and most terrifying demons—or her own life will be at risk. 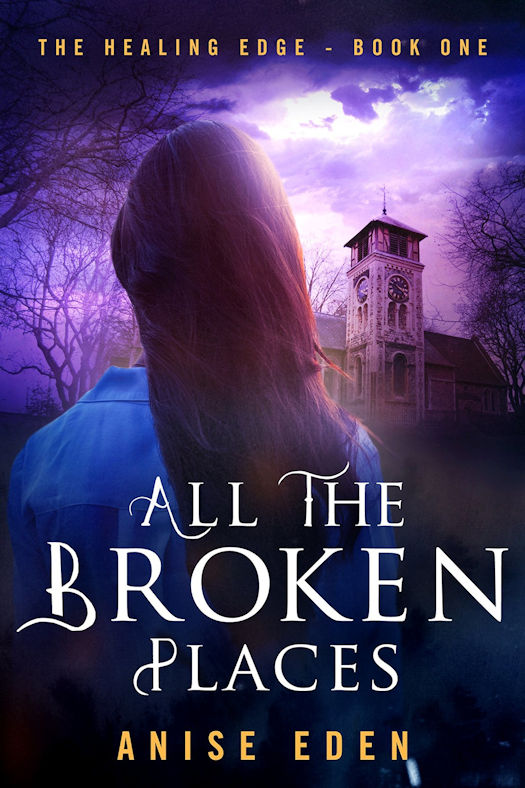 All of Cate’s problems are in her head. That may be her greatest strength.

Cate Duncan is a promising young therapist, dedicated to her work. But after her mother’s suicide, she is seized by a paralyzing depression. To save her job, Cate agrees to enter a program with Dr. Angeline MacGregor, run by her stern son, Ben, and housed in a repurposed church. Cate doesn’t quite understand what the program entails, but she soon learns that the skills she will develop there may not only help her learn how to cope with her own problems, but will also lead her to a much greater purpose.

The MacGregor Group is a collection of alternative healers whose unconventional approaches include crystals, aura reading, and psychics. They know that their life’s work invites skepticism, and welcome the chance to prove naysayers wrong. But they need the unique abilities that Cate can bring, and as she slides ever closer to her own abyss, they will do everything in their power to protect Cate from those who wish her harm—including herself.

A powerful novel of suspense and a wildly inventive start to this paranormal romance series, ALL THE BROKEN PLACES engages readers with its striking blend of the supernatural and the psychological. 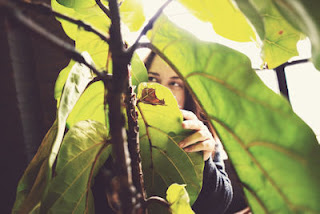 Author and plant love Anise Eden spends most of her time tucked away in her writing nook imagining things that aren't there. On those rare occasions when she emerges from seclusion, Anise may be spotted in coffee shops, staring at her laptop screen and silently moving her lips as she reviews bits of dialogue. Although Anise claims that she's the one in charge, the characters in her head do sometimes make her laugh out loud at inappropriate moments. Visit her online at www.aniseeden.com.

Labels: All the Broken Places, All the Wounds in Shadow, Anise Eden, Diversion Books, Interview, The Healing Edge
Email ThisBlogThis!Share to TwitterShare to FacebookShare to Pinterest