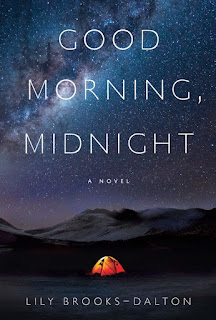 Lily:  I got started pretty young—I loved reading books so much that I wanted to try making them. My mother was an art teacher, so she was familiar with some bookmaking techniques. I still have one of the projects we made together. I wrote it, we illustrated it together, and then she made it into a beautiful little book. Things developed from there, I guess.

Lily:  I’m primarily a plotter, but there always has to be room for surprises. I love outlining, though, and so doodling a vague storyline and then refining the doodles as time goes on is how I situate myself in whatever world I’m trying to create.

Lily:  Sharing it. The excitement around letting a book out into the world is wonderful and terrifying all at once. I love the writing of it, getting to inhabit that world and be with those characters, and letting other readers into that space is difficult for me. Not to mention that moment when you can’t edit anymore—that is the moment that I know how to make the book better.

Lily:  I am so inspired by science in all its forms. In my memoir I drew on laws of physics as a backbone for the narrative, and in the novel, Good Morning, Midnight, I found astronomy and ham radio to be enormously influential. I love the way facts can blend with fiction—I find it really exciting to navigate that interplay between the fantasy and reality.

Lily:  An aging astronomer in the Arctic and an astronaut stranded in space come to terms with their choices at the end of the world.

TQ:  Tell us something about Good Morning, Midnight that is not found in the book description.

Lily:  I’m not sure! Everything that comes to mind is a spoiler.

TQ:  What inspired you to write Good Morning, Midnight? What appealed to you about writing Literary / Science Fiction?

Lily:  I was working at a radio station when I thought of the initial idea. It was in the northeast, and when we had lots of snow someone had to be responsible for periodically going outside and knocking the snow off the transmitter, otherwise it would muffle the signal and we would go off the air. If it snowed overnight, then someone had to stay and do that all night, depending on how quickly the snow was accumulating. That image, of someone all alone in an empty radio station, keeping the signal alive, stuck with me. Eventually it became this book.

I love letting research guide my writing, and so because I was so interested in astronomy and ham radio at the time, that’s the direction the story went in. I’m attracted to science fiction because I love thinking about space and stars and all that good stuff. And as much as a I love really out-there sci-fi, I gravitate toward making things feel more plausible. As a reader, I love it all, but as a writer, I like to focus on characters and settings and let plot unfold more gradually. I guess that makes me a literary writer? I don’t know, that label has always seemed odd to me. I guess because technically we’re all literary writers!

TQ:  What sort of research did you do for Good Morning, Midnight?

Lily:  Lots! I read a ton of nonfiction, like astronaut memoirs and various astronomy texts, I watched all the sci-fi movies/tv shows I could find, and I haunted space.com for like two years straight. I made it the homepage on my laptop, just so the night sky would always be on my mind.

TQ:  In Good Morning, Midnight who was the easiest character to write and why? The hardest and why?

Lily:  Augustine was the easiest, I think. He was the character I began with, and so he was always the clearest to me. I modeled him after my grandfather in a lot of ways (who I dedicated the book to), because my grandfather was always very vocal about the way that alcoholism marred the first half of his life, while also embracing the ways in which recovery illuminated the second half. That sense that it’s never too late to make amends, to do things differently—that is what I see in Augustine’s story, and it’s a story I very much relate to.

Lily:  For me and for this story specifically, the minutia of whether humanity falls by way of epidemic or warfare or asteroid or climate change was so much less interesting than what happens after. I wanted to keep the focus on the characters, to detail the emotional and psychological toll of such a catastrophe without dropping into the mechanics of how the world might continue in the wake of it. I was most interested in the individual issues, as opposed to the social. There are lots of fantastic post-apocalyptic books that delve into social issues—I wanted to write something with a different focus.

TQ:  Which question about Good Morning, Midnight do you wish someone would ask? Ask it and answer it!

Lily:  Where did the title come from?

The title, Good Morning, Midnight, is a line from a beautiful Emily Dickinson poem, but it’s also the title of another book by Jean Rhys published in 1939. At first it was just a working title for me—it felt too strange to take the title not only from a poem, but also from another novel. In the end, however, it was just too perfect. And I think that both the poem and the Rhys novel are in conversation with some of the major themes in Good Morning, Midnight. I included an epigraph that is a particularly fitting line from Rhys’s novel, and despite how different the plots of the two books are, I’ve come to see so many parallels between the two works.

TQ:  Give us one or two of your favorite non-spoilery quotes from Good Morning, Midnight.

Lily:  Okay, I’ll give you a short passage from the first chapter that I really like:

“…it was only the sky that moved him, the happenings on the other side of the atmospheric window. His work ethic was strong, his ego engorged, his results groundbreaking, but he wasn’t satisfied. He had never been satisfied and never would be. It wasn’t success he craved, or even fame, it was history: he wanted to crack the universe open like a ripe watermelon, to arrange the mess of pulpy seeds before his dumbfounded colleagues. He wanted to take the dripping red fruit in his hands and quantify the guts of infinity, to look back into the dawn of time and glimpse the very beginning. He wanted to be remembered.
Yet here he was, seventy-eight years old, at the top of the Arctic archipelago, on the rind of civilization—coming to the terminus of his research, the terminus of his life, and all he could do was stare into the bleak face of his own ignorance.”

Lily:  I’m working on a new novel now. So far it’s about an omniscient being and a human wanderer, and how their experiences intersect. I’m excited to be working on something new, we’ll see where it goes!

Lily:  Thanks so much for having me. 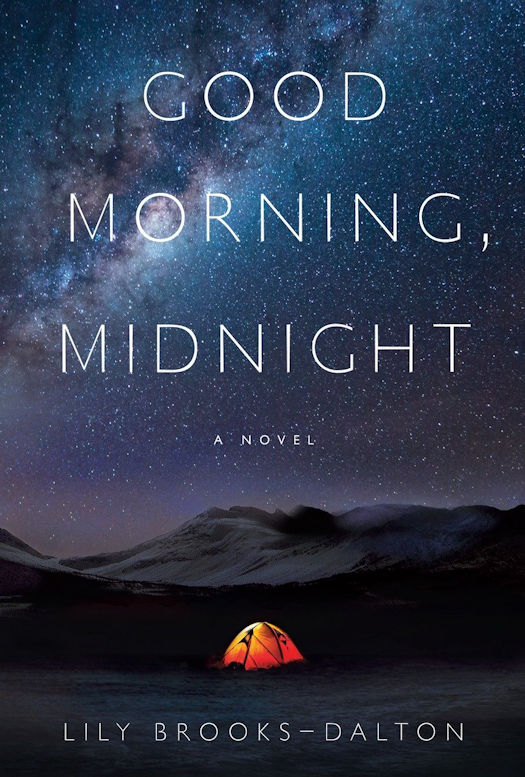 For readers of Station Eleven and The Snow Child, Lily Brooks-Dalton’s haunting debut is the unforgettable story of two outsiders—a lonely scientist in the Arctic and an astronaut trying to return to Earth—as they grapple with love, regret, and survival in a world transformed.

Augustine, a brilliant, aging astronomer, is consumed by the stars. For years he has lived in remote outposts, studying the sky for evidence of how the universe began. At his latest posting, in a research center in the Arctic, news of a catastrophic event arrives. The scientists are forced to evacuate, but Augustine stubbornly refuses to abandon his work. Shortly after the others have gone, Augustine discovers a mysterious child, Iris, and realizes that the airwaves have gone silent. They are alone.

At the same time, Mission Specialist Sullivan is aboard the Aether on its return flight from Jupiter. The astronauts are the first human beings to delve this deep into space, and Sully has made peace with the sacrifices required of her: a daughter left behind, a marriage ended. So far the journey has been a success. But when Mission Control falls inexplicably silent, Sully and her crewmates are forced to wonder if they will ever get home.

As Augustine and Sully each face an uncertain future against forbidding yet beautiful landscapes, their stories gradually intertwine in a profound and unexpected conclusion. In crystalline prose, Good Morning, Midnight poses the most important questions: What endures at the end of the world? How do we make sense of our lives? Lily Brooks-Dalton’s captivating debut is a meditation on the power of love and the bravery of the human heart.

LILY BROOKS-DALTON was born and raised in southern Vermont. Her memoir, Motorcycles I've Loved, was a finalist for the Oregon Book Award and her first novel, Good Morning, Midnight, will be published in the US on 8/9/16. A UK edition, as well as Japanese, French, Italian, Turkish, and Polish translations, are also forthcoming. Her work has appeared in The New York Times, Huffington Post, The Toast, and elsewhere. 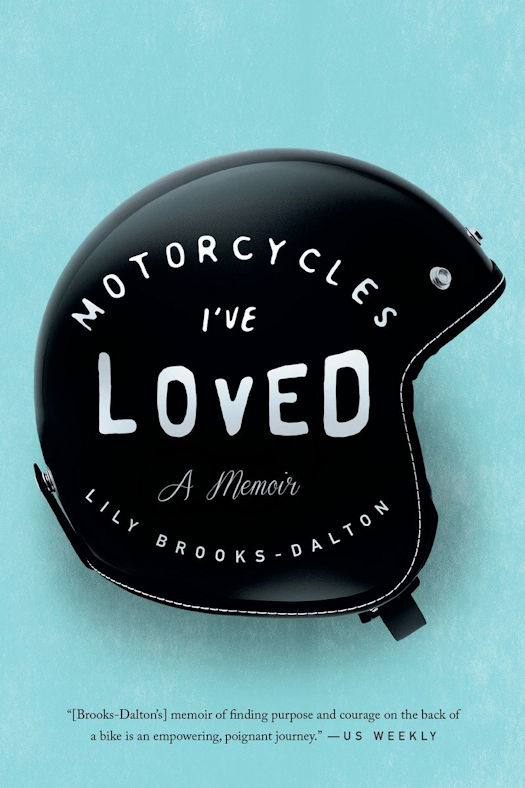 “What the PCT is to Cheryl Strayed, the open road is to Brooks-Dalton.”—Cosmopolitan

A powerful memoir about a young woman whose passion for motorcycles leads her down a road all her own.

At twenty-one-years-old, Lily Brooks-Dalton is feeling lost; returning to New England after three and a half years traveling overseas, she finds herself unsettled, unattached, and without the drive to move forward. When a friend mentions buying a motorcycle, Brooks-Dalton is intrigued and inspired. Before long she is diving headlong into the world of gearheads, reconsidering her surroundings through the visor of a motorcycle helmet, and beginning a study of motion that will help her understand her own trajectory. Her love for these powerful machines starts as a diversion, but as she continues riding and maintaining her own motorcycles, she rediscovers herself, her history, and her momentum.

Forced to confront her limitations—new and old, real and imagined—Brooks-Dalton learns focus, patience, and how to navigate life on the road. As she builds confidence, both on her bike and off, she begins to find her way, ultimately undertaking an ambitious ride that leaves her strengthened, revitalized, and prepared for whatever comes next.

Honest and lyrical, raw and thoughtful, Motorcycles I’ve Loved is a bold portrait of one young woman’s empowering journey of independence and determination.