Well I would love to start this post with a few self congratulatory sentences of how many books I had read. I started my new job this week (it went well) and I had assumed that as I was back to commuting that I was going to be able to read a few dozen books. I must have been romanticizing my speed reading capabilities as it got to Wednesday and I still wasn't 40% of the way through The City of Mirrors by Justin Cronin. I have been dipping in and out of this book over the last few weeks. I got a bit worried I wouldn't have anything to tell you about so I switched to a book I received via NetGalley. Let me tell you all about it. 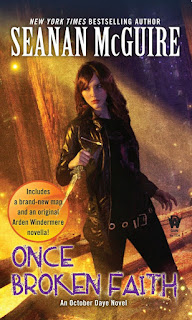 I was very lucky to receive Seanan McGuire's tenth novel of the October Daye series Once Broken Faith. In this instalment Toby is minding her own business following the life changing events of book 9 where she returned from the Kingdom of the Silences with the cure of elf-shot and ensuring the right rulers were on the throne. Finding a cure to the poison that puts the victim in an enchanted sleep for 100 years has resulted in an unprecedented meeting of rulers of all the kingdoms. Arden, Queen in the Mists, is hosting the conclave with the high King and Queen (aka Quentin's parents) present. Diplomacy is not Toby's strength but she is required to attend despite being a changeling. When a dead body turns up her investigative skills are called upon to solve the crime and keep the conclave on track before it destabilizes the entire region.

I really enjoyed Once Broken Faith as it introduces the other kingdoms of Faerie without the need to focus a plot in each kingdom. There was a good balance of introducing new characters and more information about Toby's friends and frenemies. The main plot point - the debate about the use of elf shot - is also interesting and there are convincing arguments on both sides. One of my favorite characters - the Luidaeg - is central to this plot and gives a lot of Firstborn attitude (plus a few death threats) throughout. This is the first time that Toby's squire Quentin is discussed as anything more than a secondary character. He still is in many ways but with his parents in residence during the conclave we get to find out more about their relationship, why he was fostered out and what his parents (the high King and Queen) are really like. My one criticism with Toby and many other urban fantasy female leads is that they are always getting beaten up/shot/burnt/crippled etc. If I was almost getting killed every few weeks I think I would stop leaving the house or not leave without wearing a bullet proof body suit that is coated in bubble wrap. I am hoping that McGuire gives poor Toby a break in the next novel. Toby's fiance, Tybalt the King of the Cats, is also back but isn't being very nice to Toby and you wonder whether their relationship is going to be doomed. That is all I will say on that.

We get an extra treat in Once Broken Faith as McGuire includes a novella from Arden Windermere's POV. The story is set immediately after the events of the main book and unfortunately I can't tell you anymore as it would give away what happened in the main novel. I did really enjoy as it gives another perspective of the events leading up to the conclave.

In summary, Once Broken Faith is another solid story set in McGuire's unique fantasy world. Characters we both love and hate are back and Toby's humanity is even more on the line than ever before. I definitely recommend Once Broken Faith but if you haven't read the other books in the series then I urge you to read books 1, 8 and 9 at a very minimum. You will be missing out on some great action by not reading them all though!

That is all for me this week. You will have to miss my WIR next week (August 28th) as I am off to Canada and flying when I am normally typing this up. It will be September before you read more from me so until then Happy Reading. 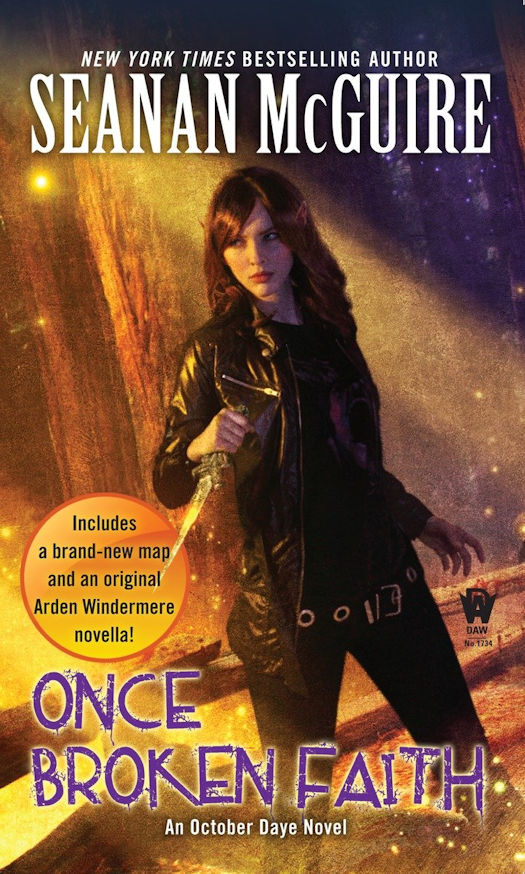 Politics have never been October “Toby” Daye’s strong suit. When she traveled to the Kingdom of Silences to prevent them from going to war with her home, the Kingdom of the Mists, she wasn’t expecting to return with a cure for elf-shot and a whole new set of political headaches.

Now the events she unwittingly set in motion could change the balance of modern Faerie forever, and she has been ordered to appear before a historic convocation of monarchs, hosted by Queen Windermere in the Mists and overseen by the High King and Queen themselves.

Naturally, things have barely gotten underway when the first dead body shows up. As the only changeling in attendance, Toby is already the target of suspicion and hostility. Now she needs to find a killer before they can strike again—and with the doors locked to keep the guilty from escaping, no one is safe.

As danger draws ever closer to her allies and the people she loves best, Toby will have to race against time to prevent the total political destabilization of the West Coast and to get the convocation back on track…and if she fails, the cure for elf-shot may be buried forever, along with the victims she was too slow to save.

Because there are worse fates than sleeping for a hundred years.