Guest Blog by Amanda Bouchet, author of A Promise of Fire


Please welcome Amanda Bouchet to The Qwillery with a guest blog about some of her favorite places in Greece. A Promise of Fire, Amanda's debut and the first novel in the Kingmaker Chronicles, was published on August 2nd by Sourcebooks Casablanca. 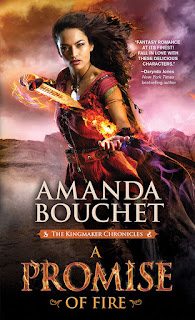 You were born and raised in the United States, but your heritage is part Greek. Can you share some interesting places you’ve visited in Greece?


Anyone who grew up in an even moderately Greek household knows that Greece is the center of the universe and the origin of all learning, language, and basically everything worth knowing—at least according to my Greek grandmother! The first time I went to Greece, I was eight, and my family stayed for a month on the island of Spetses. There was a quiet village, a monastery on a hill, stony beaches, and the Mediterranean Sea. My most vivid recollections are of the donkey in the field next to our rented house (with the owner’s permission, we fed his donkey our corn flakes because we could only find goat’s milk on the island—after tasting it, the whole family decided cereal wasn’t necessary in the morning) and of my older sister dragging me out of the water when I was tumbling around in the undertow. And apricots. Endless, juicy, delicious apricots. But whether I was younger or older (my two other trips to Greece were during my college years), this captivating country has left me with some amazing memories and a yearning to go back, if only to breathe in dry air that smells of hot stone and wild thyme and to watch the sun glinting off the turquoise sea. The list of interesting places to visit in Greece is virtually endless, but here are a few of my personal favorites.

Meteora—Imagine a valley scattered with natural sandstone pillars jutting high up into the air, the name Meteora literally meaning “middle of the sky.” (Right now, my grandmother would be instructing everyone within earshot about how meteorology, the word describing the study of the atmosphere, stems from this Greek root.) Then, imagine 9th century hermit monks deciding a pretty great place to escape bandits and other unwanted visitors was on top of the towering sandstone pillars. By the end of the 14th century, more than twenty impressive, fortress-like monasteries soared above this ancient valley in central Greece. Six remain today, awe-inspiring evidence of the motivation of religion and the determination of men. The Meteora monasteries are open to tourists now, but anyone with a real fear of heights might want to enjoy the view from the valley floor. It’s easier to get up to the cliff-top structures now than it used to be, but some of the rope ladders and steep, carved-out-of-sheer-stone steps are still deliciously terrifying and might leave even the most intrepid adventurers a little lightheaded. Luckily, teams of monks no longer have to haul the goods and visitors arriving at Meteora up the vertical cliffs using only baskets and nets—and only replacing the ropes, apparently, “when the Lord let them break.” Gulp!

Santorini—This island in the southern Aegean is so picturesque and richly interesting that it’s hard to know where to start! First of all, it’s the quintessential Greek island with bright, whitewashed houses, splashes of brilliant blue on the occasional roof, and vibrantly blooming bougainvillea tumbling from terraced buildings—a picture perfect post card. The principal city crawls up a high cliff and then sprawls like a sunbather across its top, overlooking the sparking sea filling the gigantic caldera making a huge lagoon in the center of the inland’s more-or-less circular embrace—a caldera because this place got blown to bits once upon a time.

The volcanic eruption on Santorini (around 1600 BC) is one of the most violent in recorded history, wiping out the prosperous city on the island, dumping enough junk into the atmosphere to ruin crops in China, and maybe even indirectly bringing down the entire Minoan civilization, one of the most flourishing of the Bronze Age, when the resulting tsunami decimated the culturally important and highly populated island of Crete. Not only that, but evidence from archeological excavations at Akrotiri, which tourists can visit to see frescoes, pottery, artwork, the remains of impressively large buildings, and even hot and cold running water systems going straight into homes, bathing rooms, and even toilets (three cheers for Bronze Age Minoans!), shows that the layout of Akrotiri resembles Plato’s description of the legendary lost city. This once-thriving metropolis buried under lava and ash, and its terrible fate, may well have inspired the famous myth of Atlantis. And if all that’s not reason enough to visit Santorini, I guarantee you there are a ton of really cute cats.

Delphi—Delphi, which ancient Greeks considered the center of the world, has quite a few claims to fame. Most notably, it housed the famous Oracle, who supposedly spoke for Apollo and who was regularly consulted throughout classical times on important decisions by Greeks, Romans, Egyptians, and more. As a tourist site, it’s hugely rich in archeological remains, with temples, sanctuaries, a theater, and a large stadium—because this is also one of the four places where every four years athletes from all over the ancient Greek world came to compete in athletic games, precursors of our modern Olympics. Setting Delphi apart from the other three locations was also a music competition: the mousikos agon. This UNESCO World Heritage Site is frankly jaw-dropping, but what I remember most was the feeling I got there. Magic. The arid bite of the air, the droning of insects, a breeze whispering over stone, the mountains at my back, the sea spread out before me, and history in every breath… Simply magic.

I’d love to talk about Mycenae, Athens and the Acropolis, and so much more, but I’ve already gone on too long. Thank you for having me on the blog and letting me share some of my favorite memories of Greece with you! 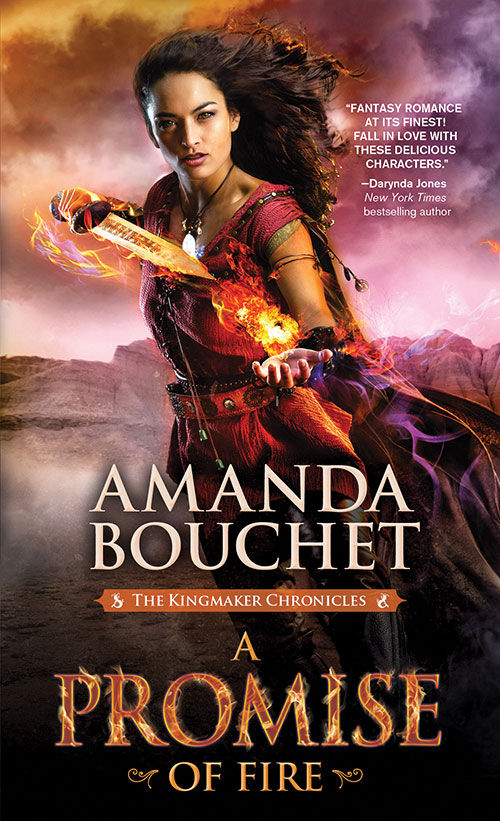 KINGDOMS WILL RISE AND FALL FOR HER…

“Cat” Catalia Fisa lives disguised as a soothsayer in a traveling circus. She is perfectly content avoiding the danger and destiny the Gods—and her homicidal mother—have saddled her with. That is, until Griffin, an ambitious warlord from the magic-deprived south, fixes her with his steely gaze and upsets her illusion of safety forever.

BUT NOT IF SHE CAN HELP IT

Griffin knows Cat is the Kingmaker, the woman who divines the truth through lies. He wants her as a powerful weapon for his newly conquered realm—until he realizes he wants her for much more than her magic. Cat fights him at every turn, but Griffin’s fairness, loyalty, and smoldering advances make him increasingly hard to resist and leave her wondering if life really does have to be short, and lived alone.

Award-winning author Amanda Bouchet grew up in New England and studied French at the undergraduate and graduate levels. She moved to Paris, France, in 2001. Her first novel, A Promise of Fire, won several Romance Writers of America chapter contests, including the Orange Rose Contest and the paranormal category of the prestigious Golden Pen.