Review: The Readaholics and the Falcon Fiasco by Laura DiSilverio 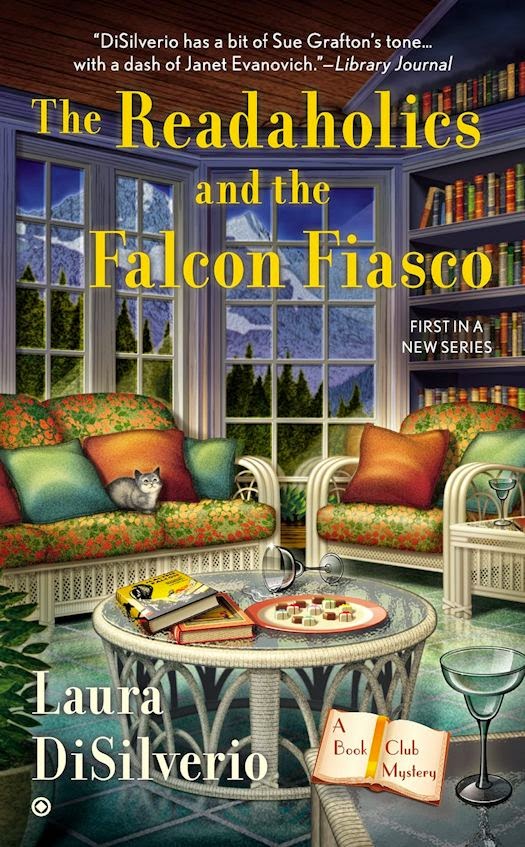 Amy-Faye Johnson’s book club, the Readaholics, enjoys guessing whodunit in mysteries like The Maltese Falcon. But when a murder happens in their midst, they discover that solving crimes is harder that reading about them…

Amy-Faye has always loved her idyllic Rocky Mountain town of Heaven, Colorado. Her event-planning business is thriving, her fellow book-obsessed Readaholics are great, and her parents live only a few blocks away. But lately her hometown has felt a little less heavenly. First, she agrees to plan a wedding without realizing the groom is her ex-boyfriend. Then, Ivy, one of her fellow Readaholics, dies suddenly under mysterious circumstances.

The police rule Ivy’s death a suicide by poisoning, but Amy-Faye and the remaining Readaholics suspect foul play. Amy-Faye soon discovers that Ivy was hiding dangerous secrets—and making deadly enemies. Taking a page from her favorite literary sleuths, Amy-Faye is determined to find the real killer and close the book on this case. But finding the truth could spell her own ending…

The Readaholics and the Falcon Fiasco by Laura DiSilverio is the first novel in a new cozy mysteries series entitled the Book Club Mysteries. The book follows Amy-Faye Johnson, a business owner in her hometown of Heaven, Colorado. Amy-Faye runs a book club for her closest friends, aptly named “The Readaholics”. The day after the group discusses Dashiell Hammett’s The Maltese Falcon, Amy-Faye discovers the body of childhood friend and book club member, Ivy Donner. The police feel that Ivy has committed suicide by deliberately ingesting poison, but Amy-Faye and the Readaholics believe that Ivy was murdered.

Amy-Faye is a charming character. She runs a successful, but small, event planning service called Eventful. She is intelligent and strong minded, but her inner dialogue shows her to also be a bit insecure and vulnerable. That vulnerability comes to the forefront when Amy-Faye is asked to plan the quickie wedding of her former boyfriend, Doug, to gorgeous and elegant New York lawyer Madison. She agrees to do the planning mostly so people don’t pity her for failing to keep Doug, but it goes far from smoothly, and produces some of the funnier scenes of the novel.

Among the Readaholics are; Amy-Faye’s childhood best friend Brooke, who has issues with her wealthy and intrusive in-laws; Lola, another long time friend who owns a local greenhouse/flower shop; Kerry, the middle aged mayor who is very confident and put together; Maud, the oldest of the group, a long time activist and conspiracy theorist whose short diatribe on Edward Snowden is extremely entertaining; and the ill fated Ivy, whose untimely demise sets the group on the trail of a killer. The novel is chock full of other wonderful characters, the most memorable of which is Detective Lindell Hart, a handsome southern transplant who catches Amy-Faye’s eye during the course of the investigation. Doug plays a prominent role as Amy-Faye works through her lingering feelings for him while planning his wedding, a scenario that proves to be humorous, while at the same time poignant. Other notable characters are Ham, Ivy’s creepy brother, and her boss and his wife, the smarmy Clay and snooty Fiona, Kirsten, Ivy’s jealous office rival, and Brooke’s father-in-law, Troy Sr, who is condescending to anyone he meets.

The author shows a masterful grasp of detail with the dynamics of the small town, and the intertwining character relationships are well drawn and complete without being overwhelming. The mystery unfolds at the perfect pace and has a climactic and satisfying ending. DiSilverio brings a unique element to the book when referencing The Maltese Falcon. She skillfully weaves classic bits of Falcon into the storyline that are both relevant and thought provoking. I am definitely looking forward to the next installment of the series, The Readaholics and the Poirot Puzzle, which comes out in December of 2015.


Note: The giveaway was initially posted with a Guest Blog post from Laura DiSilverio (Finding a Book Club that Fits) here. You may enter there or here.

What:  One entrant will a Mass Market Paperback copy of The Readaholics and the Falcon Fiasco by Laura DiSilverio from The Qwillery.

Who and When:  The contest is open to all humans on the planet earth with a mailing address. Contest ends at 11:59 PM US Eastern Time on April 20, 2015. Void where prohibited by law. No purchase necessary. You must be 18 years old or older to enter.