Review: William Shakespeare's The Phantom of Menace by Ian Doescher 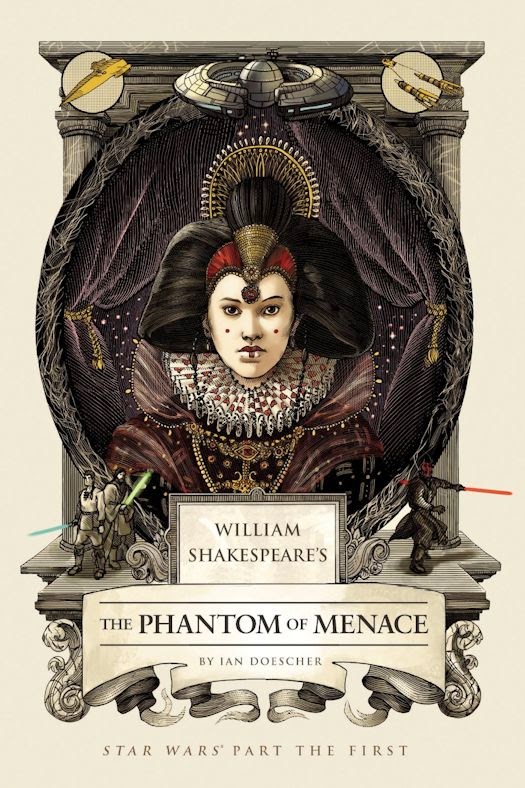 Join us, good gentles, for a merry reimagining of Star Wars: episode 1 as only Shakespeare could have written it. The entire saga starts here, with a thrilling tale featuring a disguised queen, a young hero, and two fearless knights facing a hidden, vengeful enemy.

’Tis a true Shakespearean drama, filled with sword fights, soliloquies, and doomed romance . . . all in glorious iambic pentameter and coupled with twenty gorgeous Elizabethan illustrations. Hold on to your midi-chlorians:  The play’s the thing, wherein you’ll catch the rise of Anakin!

Unless you’ve been living in a Wampa’s ice cave on the remote planet of Hoth, I’d wager you’re familiar with the Star Wars universe. You also probably know a thing or two about William Shakespeare as it's required reading in most high school English classes. In The Phantom of Menace, Ian Doescher retells George Lucas’s original story through the iambic pentameter of William Shakespeare, and it's absolutely brilliant.

As a slightly obsessed fan of the original Star Wars movie trilogy, I have to confide that I’m less a fan of the prequels. Admittedly, The Phantom Menace introduced some very cool characters like Darth Maul and Qui-Gon Jinn but nothing could redeem the introduction of the most reviled character in Star Wars history, Jar Jar Binks. Dare I confess that I enjoyed William Shakespeare’s The Phantom of Menace more than the film? I did, mainly because this version throws a new spin on Jar Jar that I thoroughly enjoyed. Another character I connected to in this volume that I didn’t in the movie was Anakin Skywalker. Doescher‘s writing instills in him a level of heartwarming depth that I felt was sorely missing in the film. The Phantom of Menace is packed with action, humor, and unexpected emotion. Complimenting the story are many gorgeous illustrations by the talented Nicolas Delort. I also really enjoy the play format with its asides and soliloquies. They offer increased insight and information that brings an exciting added dimension to many characters. Another part of the fun for me is picking up on the author's many homages to the classics.

I like Shakespeare, I love Star Wars, and I am thrilled with the creative mix of the two. I would recommend this book for any fan of Star Wars, fans of the Bard but also to non-Shakespearean readers as well. It's fresh, easy to read, and delightfully entertaining. The Force is strong with Ian Doescher and The Phantom of Menace proves it.