Please welcome Melissa F. Olson to The Qwillery. Boundary Crossed, the first novel in the Boundary Magic series, will be published by 47North on May 1, 2015. 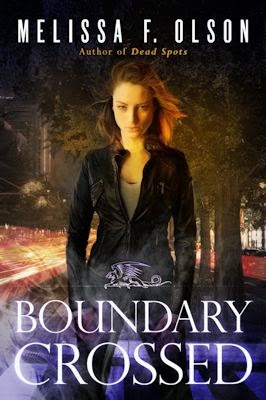 How does the new book tie in with your old trilogy?

It’s a spinoff, similar to Kelley Armstrong’s Women of the Otherworld books or Patricia Brigg’s Alpha and Omega series. So Lex is connected to something that happens in Hunter’s Trail, and there will occasionally be appearances from the LA characters we’ve met already.

The other big connection is that Boundary Crossed also features a null, a human character who neutralizes all nearby magic. In this case, though, the null isn’t the protagonist; it’s the protagonist’s eighteen-month-old niece. I thought it would be interesting to explore what it’s like having a really young null sort of shoved into this world.

Speaking of which, Lex is a very different character from your previous protagonist, Scarlett, and you’ve also written first person from three other characters’ perspectives. Who do you like writing best?

I know I should say Lex, because that’s the newest book, but honestly, I have the most fun writing Scarlett. She has my sense of humor, my taste in movies, and my habit of reacting to stress with snark. But there are a lot of things I love about writing Lex, because she’s just a more mature and maybe even complex character. And tougher. For example, Scarlett’s first response to violence is to make a witty remark and maybe run. Lex’s first response is to kick someone’s f**ing ass.

What do you and Lex have in common?

Well, we both own too many dogs, and we both sometimes have a chip on our shoulders. But family is probably the biggest thing. Lex is from a large, noisy, loving family who get involved in her life, just as she’s involved in all of theirs. One thing I really enjoyed about these books was getting to write cousins. I grew up with so many, and they are all so important to me, and it’s fun to write a character who has a lot of first cousins she treats like sibling/friends.

A big part of Lex’s identity is her past career as a soldier. Why write about a veteran?

As a writer I’ve found that one of the things that helps me understand my characters is thinking about who they would idolize. Scarlett, for example, is a reluctant hero: her personality is most in line with someone like John McClane from the Die Hard movies. I wanted my next protagonist to be different from Scarlett, so I thought about who isn’t a reluctant hero. Lex tends to emulate Captain America. She’s a born guardian, a protector.

Was it scary to write about a character whose background is so different from your own? How do you handle that situation?

It was terrifying! Lex isn’t just an army vet, she’s a veteran of the Iraq War. That’s a very powerful thing to write about, especially as our country is just starting to really turn around and examine our motives and actions during that time.

The only way to deal with it, really, is to do as much research as you can. I read a number of excellent books on the soldier’s experience in Iraq, and I contacted a female former soldier and had her read through the book for inaccuracies in terms of terminology, thought patterns, weapons, etc. It was still pretty scary, but if authors only wrote about people who had their exact same backgrounds, fiction would get boring very quickly.

How did you come up with boundary magic?

Within my mythology, witches can perform general magic, but a small percentage of them have certain specialties: a gift for finding things, healing people, etc. I also talk about death magic in the previous books, and at some point I thought, “what if I combined those?”

I studied a lot of literature in college, and there’s also line from Oscar Wilde, “There is a land of the living and a land of the dead, and the bridge is love, the only survival, the only meaning.” I don’t mean to sound pretentious, or like I’m comparing myself to Wilde, but that sentence has stuck in my head since high school. I started thinking about twins and that bridge, and the idea came out of that as well.

I’m really partial to the opening line, actually: "The third time I died was early on a Monday morning, a week after Labor Day."

What’s next for you?

Boundary Lines, the sequel, comes out October 13th. I’m working on a secret project right now, and then I really, really want to get back to my hardboiled detective series. After that, who knows? 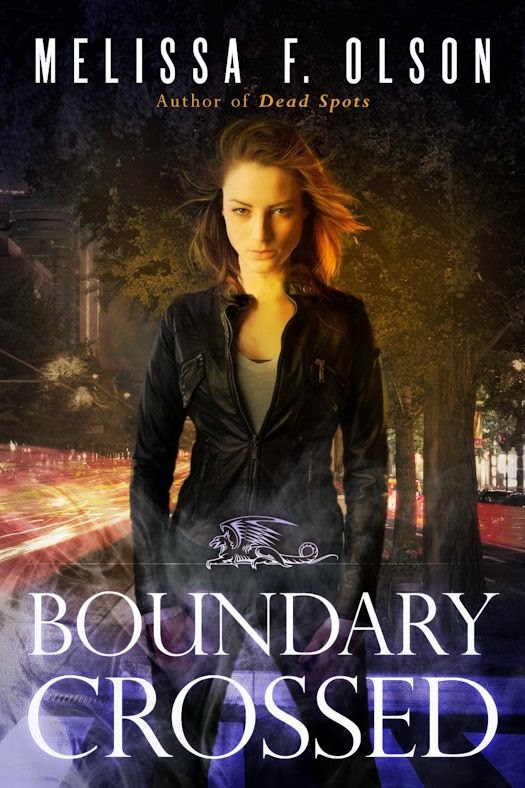 After her twin sister’s brutal murder, former US Army Sergeant Allison “Lex” Luther vowed to protect her niece, Charlie. So when two vampires try to kidnap the baby, it quickly turns into a fight to the death—Lex’s death, that is.

She wakes up to two shocking discoveries: she has miraculously survived the fight, and baby Charlie is a “null,” gifted with the ability to weaken supernatural forces...and a target for creatures who want to control that power. Determined to guarantee her niece’s safety, Lex makes a deal with the local vampires. She sets out with the mysterious—and undead—“fixer” Quinn to track down whoever’s responsible for the kidnapping, sharpening her newfound magic skills along the way. But the closer she gets to the truth, the more dangerous her powers become.

Boundary Crossed is a dark, thrilling journey into a world where the line between living and dead isn’t nearly as solid as it appears... 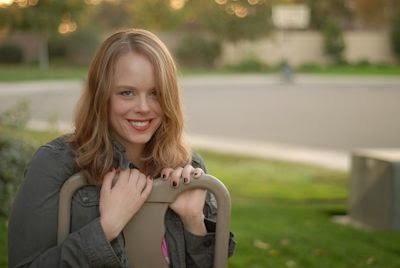 Melissa Olson was born and raised in Chippewa Falls, Wisconsin, and studied film and literature at the University of Southern California in Los Angeles. After graduation, and a brief stint bouncing around the Hollywood studio system, Melissa proved too broke for LA and moved to Madison, WI, where she eventually acquired a master’s degree from UW-Milwaukee, a husband, a mortgage, a teaching gig, two kids, and two comically oversized dogs, not at all in that order. She loves Madison, but still dreams of the food in LA. (Literally. There are dreams.) Along with her Scarlett Bernard novels Dead Spots, Trail of Dead, and Hunter’s Trail she has also released a mystery novel, The Big Keep. Melissa’s work has been published in the Daily Trojan, the Chippewa Falls Herald Telegram, The International Journal of Comic Art, The La Crosse Tribune, U-Wire, Women on Writing.com, and the compilation Images of the Modern Vampire. She has also presented or been on panels at the Midwest Popular Culture/American Culture Conference, the International Association of the Fantastic in the Arts Conference, OdysseyCon, and EncountersCon in Wichita.

What:  One entrant will win a signed copy of Boundary Crossed by Melissa F. Olson from the Author. US/CANADA ONLY

Who and When:  The contest is open to all humans on the planet earth with a US or Canadian mailing address. Contest ends at 11:59 PM US Eastern Time on April 24, 2015. Void where prohibited by law. No purchase necessary. You must be 18 years old or older to enter.