Review: The Diamond Conspiracy by Pip Ballantine and Tee Morris ... with Giveaway! 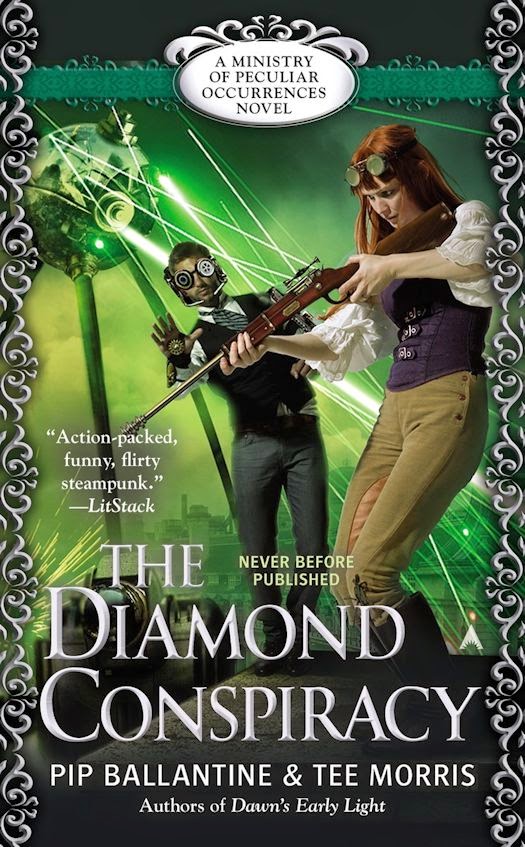 For years, the Ministry of Peculiar Occurrences has enjoyed the favor of Her Majesty the Queen. But even the oldest loyalties can turn in a moment…

Having narrowly escaped the electrifying machinations of Thomas Edison, Books and Braun are looking forward to a relaxing and possibly romantic voyage home. But when Braun’s emergency signal goes off, all thoughts of recreation vanish. Braun’s street-wise team of child informants, the Ministry Seven, is in grave peril, and Books and Braun must return to England immediately.

But when the intrepid agents finally arrive in London, the situation is even more dire than they imagined. The Ministry has been disavowed, and the Department of Imperial Inconveniences has been called in to decommission its agents in a most deadly fashion. The plan reeks of the Maestro’s dastardly scheming. Only, this time, he has a dangerous new ally—a duplicitous doctor whose pernicious poisons have infected the highest levels of society, reaching even the Queen herself…

Book four of The Ministry of Peculiar Occurrences series The Diamond Conspiracy starts not long after my favourite heroes escape certain death in Dawns Early Light. For those of you who have been following the series will remember that the two agents had come to a 'romantic understanding' in book 3 and this instalment starts with Books and Braun getting to know each other a bit more intimately. However, it’s all bad news back in London. Braun's band of street urchins, The Ministry of Seven are about to come very close to their last ever mission. In the midst of a normal snatch 'n' grab one of the seven is captured by an evil doctor. It's not long before Books and Braun are summoned back to London, determined to find the missing child. They however, discover something far more fiendishly evil is in play with the Ministry in ruins, it’s agents on the run from the Department of Imperial Inconveniences and The Maestro about to take the entire empire on behalf the Queen. It’s all hands on deck to save the Ministry and themselves from whatever nefarious plans The Maestro has up his sleeve.

Everything was turned on its head in The Diamond Conspiracy with the Ministry agents being hunted down by the Department of Imperial Inconveniences. It made for a rather exciting twist in the story and introduces or re-introduces us to more of the Ministry's agents. The writing duo of Ballantine and Morris felt the need to emphasize the horror of what was happening to the agents by describing the horrific murder of one of my favourite Ministry agents from the Ministry Protocols short stories not once, but twice.  I enjoyed the return of awesome Aussie, agent Bruce Campbell even though I wasn't that fond of him in the previous books. I think I liked him so much more because he was almost handed his butt on more than one occasion by one of the Department's more dedicated female agents, Beatrice Muldoon. The chapters involving Ministry's female enemies were some of my favourites. Beatrice was an excellent adversary but she didn't hold a candle to Sophia Del Morte. Sophia found that the Maestro and Dr. Hyde had gone one step too far in their evil plans so in order to save her own very attractive but evil bacon she takes the most unpredictable course of action.  To tell more would be too spoilery!

The Diamond Conspiracy could have just as easily been called 'the big reveals'. Ballantine and Morris serve up a plethora of uncovered secrets. Books' learns more about his father when he returns to his childhood home. What he discovers is far worse than he ever imagined. I wasn't totally surprised but thought there were a few good twists in store for my favourite character.  One of the biggest reveals was the  mystery surrounding Dr. Sound and the 'the Restricted Area' that had me silently shouting 'nnnoooooooooooooooo'. I felt let down that Ballantine and Morris decided to use other people, both real and fictional, as plot points.

I absolutely love this series. I love the characters (especially Books), I love the setting, the steampunkiness and the secrets and intrigue are second to none. Why is it in book number 4 where everything is ripe for maximum enjoyment that I have to say....and I can barely type it ...that I was disappointed? I felt let down by the crossover of other characters. Ballantine and Morris are so imaginative, not just in this series but in all their others and I think this is why I was so disappointed. I will say that despite my disappointment this is still a good book, a fantastic series and check out the cracking cover. Love it! I wouldn't want anyone to miss out on any of the adventures of Books and Braun so if you haven't indulged I suggest you start at the beginning with Phoenix Rising.

What:  One entrant will win a Mass Market Paperback copy of The Diamond Conspiracy by Pip Ballantine and Tee Morris from Ace. US/CANADA ONLY

Who and When:  The contest is open to all humans on the planet earth with a US or Canadian mailing address. Contest ends at 11:59 PM US Eastern Time on April 19, 2015. Void where prohibited by law. No purchase necessary. You must be 18 years old or older to enter. 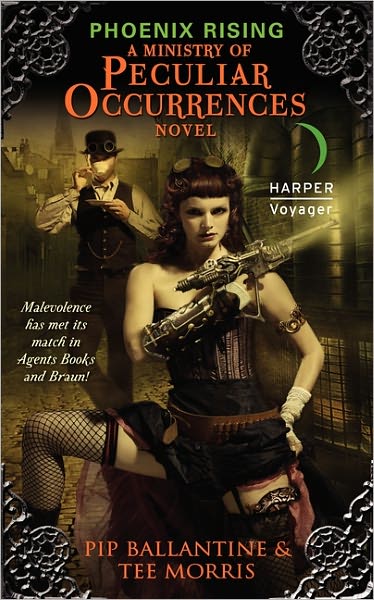 Evil is most assuredly afoot—and Britain’s fate rests in the hands of an alluring renegade . . . and a librarian.

These are dark days indeed in Victoria’s England. Londoners are vanishing, then reappearing, washing up as corpses on the banks of the Thames, drained of blood and bone. Yet the Ministry of Peculiar Occurrences—the Crown’s clandestine organization whose bailiwick is the strange and unsettling—will not allow its agents to investigate. Fearless and exceedingly lovely Eliza D. Braun, however, with her bulletproof corset and a disturbing fondness for dynamite, refuses to let the matter rest . . . and she’s prepared to drag her timorous new partner, Wellington Books, along with her into the perilous fray.

For a malevolent brotherhood is operating in the deepening London shadows, intent upon the enslavement of all Britons. And Books and Braun—he with his encyclopedic brain and she with her remarkable devices—must get to the twisted roots of a most nefarious plot . . . or see England fall to the Phoenix! 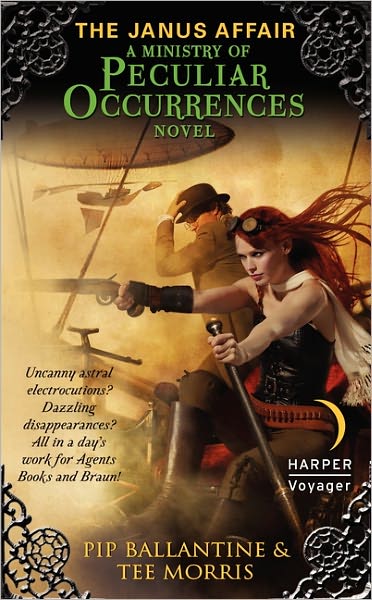 Evildoers beware! Retribution is at hand, thanks to Britain's best-kept secret agents!!

Certainly no strangers to peculiar occurrences, agents Wellington Books and Eliza Braun are nonetheless stunned to observe a fellow passenger aboard Britain's latest hypersteam train suddenly vanish in a dazzling bolt of lightning. They soon discover this is not the only such disappearance . . . with each case going inexplicably unexamined by the Crown.

The fate of England is once again in the hands of an ingenious archivist paired with a beautiful, fearless lady of adventure. And though their foe be fiendishly clever, so then is Mr. Books . . . and Miss Braun still has a number of useful and unusual devices hidden beneath her petticoats. 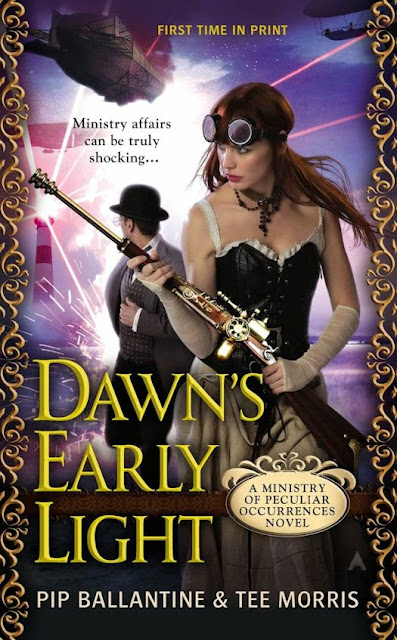 Working for the Ministry of Peculiar Occurrences, one sees innumerable technological wonders. But even veteran agents Braun and Books are unprepared for what the electrifying future holds…

After being ignominiously shipped out of England following their participation in the Janus affair, Braun and Books are ready to prove their worth as agents. But what starts as a simple mission in the States—intended to keep them out of trouble—suddenly turns into a scandalous and convoluted case that has connections reaching as far as Her Majesty the Queen.

Even with the help of two American agents from the Office of the Supernatural and the Metaphysical, Braun and Books have their work cut out for them as their chief suspect in a rash of nautical and aerial disasters is none other than Thomas Edison. Between the fantastic electric machines of Edison, the eccentricities of MoPO consultant Nikola Tesla, and the mysterious machinations of a new threat known only as the Maestro, they may find themselves in far worse danger than they ever have been in before…

And don't miss The Ministry of Peculiar Occurrences short stories. You can find information about all of them here.