Review: A First Date With Death by Diana Orgain 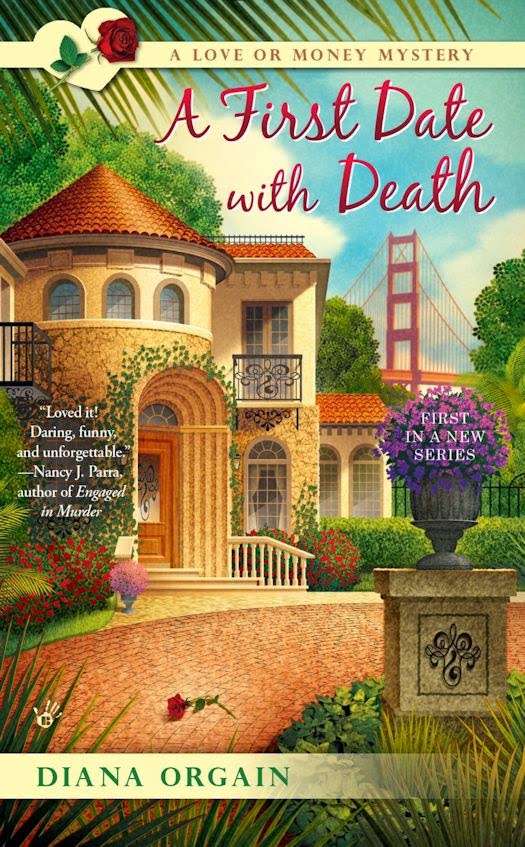 Reality TV meets murder in the first in a new mystery series from the author of the Maternal Instincts Mysteries and co-author the New York Times bestselling Scrapbooking Mysteries.

When brokenhearted Georgia Thornton goes looking for romance on reality TV, she has nothing to lose—apart from a good man, a cash prize, and maybe her life…

What was Georgia thinking? Sure, some cad ditched her at the altar, but can she really find love on TV? Her best friend—and producer of the reality show Love or Money—thinks so. Ten men. Ten adventure-filled dates. What can go wrong? For starters, a faulty bungee cord that hurls Georgia’s first date into a tragic spiral off the Golden Gate Bridge.

He’s replaced by Paul Sanders, Georgia’s former fiancé. But the cop isn’t looking for a TV gig. Suspecting that the lover’s leap was no accident, Paul’s going undercover. When another bachelor gets a fatal kiss-off, the reality is that someone has killer new plans for the show—and for Georgia herself. Now, under the threat of permanent cancellation, Georgia fears that the only man on the set she can trust is the one man she just can’t count on…

Diana Orgain’s A First Date with Death is the debut novel of her new Love or Money Mystery Series. This book follows former police officer Georgia Thornton, who has agreed to be on a new reality show entitled Love or Money. Georgia has to evaluate ten eligible men during various adventure dates, some of whom are looking for love, some for money. To win the game of love, and a substantial monetary prize, which she will then split with her new beau, Georgia’s final choice must be one of the bachelors looking for love, if her choice is in the game just for the money, not only does she lose her heart, but she also loses her claim to the money. Things start off badly when her first date, Arron’s, bungee cord fails, plunging him off the Golden Gate Bridge, and gets worse, when her former fiancé, Paul Sanders, takes his spot as a bachelor to investigate the accidents that keep occurring during the filming.

Georgia has recently lost her job and her fiancé, sending her life into a nose dive. In a moment of weakness, she agrees to be on the show to help her friend Becca, who is a production assistant on Love or Money. Georgia has serious reservations about the show from the beginning, but the accidents and deaths that are plaguing the production peak her investigative interest, and she goes from being an unenthusiastic reality star, to an amateur sleuth, trying to stop the chaos before anyone else can get hurt, along with trying to win the prize money and possibly find true love. She is portrayed as a strong woman, who has made some poor choices and is trying hard to overcome them. Paul came off as a little smarmy right from the start, and I found myself hoping early on that Georgia would not choose him in the end. Among the bachelors, a few standouts were Nathan, the adorable surfer boy, Edward, the hunky doctor, dark and mysterious writer Scott, and armed forces vet Derek. The show’s producer, Cheryl, is a bossy and brassy woman who comes off as a bit of a caricature of a Hollywood shark, but this works well in the story and gives Georgia an amusing foil. Georgia’s dad becomes involved in the plot partway through the novel and brings heart to the storyline and solace to poor Georgia.

Many of the chapters begin with a little vignette surrounding an interview with one of the bachelors. These scenes reveal which men are on the show for love and which for money, and give the reader a glimpse into the bachelors’ motivations and backgrounds. The story is fast paced and has two branches. The first being the mystery, which is tidied up nicely in the end, and the second being Georgia’s search for self worth and stability amid the plastic and fabricated world of reality television. The reader will be rooting for her to ultimately find those things, along with lasting love. In the end, as long as Georgia gets what she needs, the big payout doesn’t seem very important.
Posted by Qwill at 12:37 PM