Please welcome Dana Cameron to The Qwillery. Hellbender, the 3rd Fangborn novel, was published on March 31, 2015 by 47North. 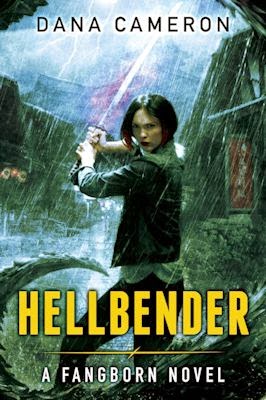 
One of the hardest things I did when I started writing UF was realizing that I had to break away from the goal that I'd striven for all my career as an archaeologist: to keep strictly to the available data. Mind you, I'd already written six mystery novels and a short story, so you'd think writing more fiction would be a snap. It really wasn't. When Charlaine Harris and Toni L.P. Kelner asked me to write a werewolf story set at the holidays, I was delighted. Then terror overtook me as I realized that the first part of my process for writing fiction was missing.
When I went to my office, I found I had no reference books on werewolves. None on vampires either. My other fiction was either rooted in history or in my own background as an archaeologist, and I'd wanted to keep as much to realism as possible, to get the reader behind the scenes of a dig. So how could I possibly write this story? I had novels about vampires and other supernatural creatures by other authors—would I just pick one of them to imitate?
That's when I had what a major breakthrough. I could just make up my own world. This seems laughable, but it contradicted all my training and previous work. But it was like snapping the restraining bolt off R2D2, and suddenly, you couldn't stop me. A flock of short stories followed that first one, “The Night Things Changed,” and then the novels featuring archaeologist (and Fangborn werewolf), Zoe Miller: Seven Kinds of Hell, Pack of Strays, and now Hellbender.
I decided to turn all the usual conventions upside-down. The Fangborn were superheroes, working in secret to protect humanity. I decided that I didn't need to chuck the archaeology, in fact, I'd start looking for images or stories about shapeshifters, wolves, snakes, ravens, or eyes in folklore, art, and artifacts. In a few instances, I even incorporate other fiction about the supernatural. In my short story, “The Curious Case of Miss Amelia Vernet,” a Sherlockian pastiche with a Fangborn twist, I use lines from the Sherlock Holmes canon to create the idea that there's more going on at 221B Baker Street than meets the eye. I use historical and archaeological evidence about supernatural creatures (“vampire” burials, especially). By doing this, I am able to create a “history” for the Fangborn. Combining my fictional elements with famous stories, architecture, or objects that the reader might recognize, make the existence of the Fangborn plausible.
It's also a lot of fun to twist history around to suit me. That's another thing I was not allowed to do as an archaeologist. Speculating with no basis in fact, creating stories just because I liked them, taking things out of context—that's the principal no-no right there. And yet, with just a bit of history, I can create my own worlds. The trick is to keep telling the truth, as accurately as possible, most of the time, so that your fiction fluidly enters the reader's mind. 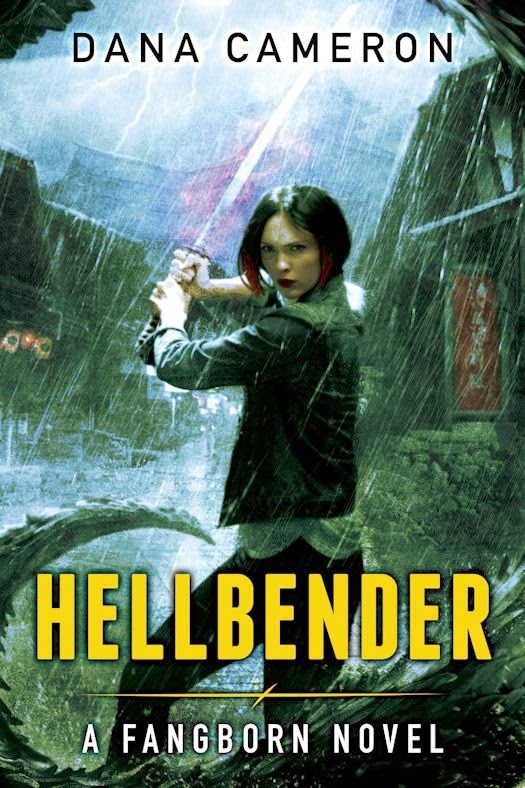 I-Day is near at hand, and soon the Fangborn will reveal themselves to humankind. As a member of this secretive race of werewolves, vampires, and oracles, will archaeologist Zoe Miller be prepared?

Still grappling with the newfound powers she gained after opening Pandora’s box, Zoe shares the responsibility of protecting “Normal” humans. Having long preferred to keep to the shadows, she knows the pending revelation of the Fangborn will set the world on fire. With Fangborn enemies in the Order of Nicomedia forcing their hand, Zoe and her supernatural Family have no choice but to step into the spotlight. But that decision has garnered the attention of the powerful and otherworldly beings known as the Makers. They claim to have created the Fangborn—not as saviors, but as predators. And it seems they have their own plans for Zoe…and for the fate of all the Fangborn.

Hellbender starts off immediately at the end of the prior novel, Pack of Strays, during a battle between the Fangborn and the Order. Zoe is once again struggling to control her powers as she gains more and more of them. The story ranges from Japan to Alaska back to Boston (with additional stops along the way).

Cameron introduces a new element to the Fangborn story - the Makers. With them comes quantum mechanics and spooky motion at a distance along with some other fun science. Zoe and her closest "Normal" human and Fangborn companions are trying to figure out who they are. Eventually Zoe takes steps to protect the Fangborn from the Order and the Makers. She has grown tremendously in her power, with a much deeper understanding of what she is capable of doing. She makes some incredibly tough decisions that affect all the Fangborn and her personally. Enemies are made and new allies acquired. Zoe is growing into her role as protector of the Fangborn. Consequently romance takes a back seat to everything going on. Zoe has more important things to deal with at the moment. However, one of things I like most about Zoe is her compassion and internal struggle to be human.

With its mixture of urban fantasy, action/adventure and science theory, Hellbender easily could be called genrebender and mindbender. I think this adds a great deal of depth to Zoe's story and that of the Fangborn without being overwhelming. I hope we've not seen the last of the scientific exploration regarding the genesis of the Fangborn. Additionally, there are several really well done action scenes and the pacing is crisp throughout.

Zoe Miller is a very compelling heroine. With its fine cast of supporting characters, tons of exciting action, and its exploration of the Fangborn origin story, Hellbender is my favorite novel in the Fangborn series.


Dana and I talk about the Fangborn series, among other things, at NYCC 2014:

Dana Cameron can't help mixing in a little history into her fiction. Drawing from her expertise in archaeology, Dana's work (including traditional mystery, noir, urban fantasy, historical fiction, and thrillers) has won multiple Agatha, Anthony, and Macavity Awards and earned an Edgar Award nomination. Her third Fangborn novel, Hellbender, was published in March 2015 by 47North. Her most recent Fangborn short story is a Sherlockian pastiche, "The Curious Case of Miss Amelia Vernet.” Her story, "The Sun, The Moon, and The Stars," featuring Pam Ravenscroft from Charlaine Harris's acclaimed Sookie Stackhouse mysteries, appears in Dead But Not Forgotten: Stories from the World of Sookie Stackhouse. Www.danacameron.com 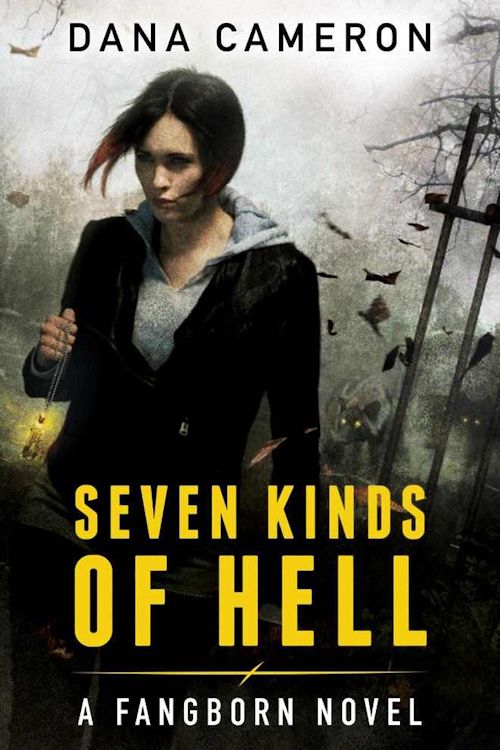 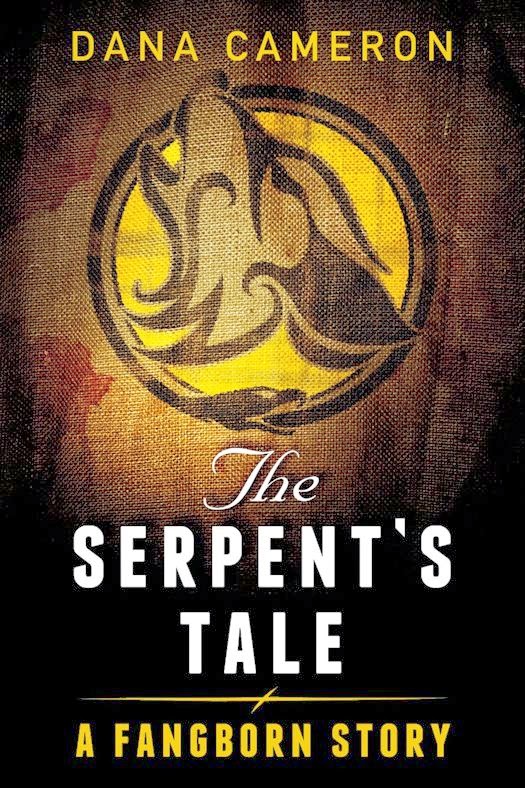 “The Serpent’s Tale” is a Fangborn story set in 13th-century England from the award-winning author of Seven Kinds of Hell.

When the villagers of Godestone report a series of bizarre and troubling events, Sir Hugo, his heavily pregnant wife, Lady Alice, and her distant kinsman Father Gilbert are honor bound to investigate, for they are “born to the Fang,” shape-shifters dedicated to fighting evil in secret.

And the events are worrying indeed—stolen farm implements, a mutilated goat, and now a missing child. Their investigation is further complicated by the arrival of Robert Fynch, who was drawn to the scene by the tales of mysterious happenings in the village. A member of the fanatical Order of Nicomedia, he is bent on tracking down and killing those “born to the Fang,” believing the shape-shifters to be demons, rather than the protectors of humanity they truly are.

Can Lady Alice, Sir Hugo, and Father Gilbert stop a murderer in their village without their true nature being discovered? 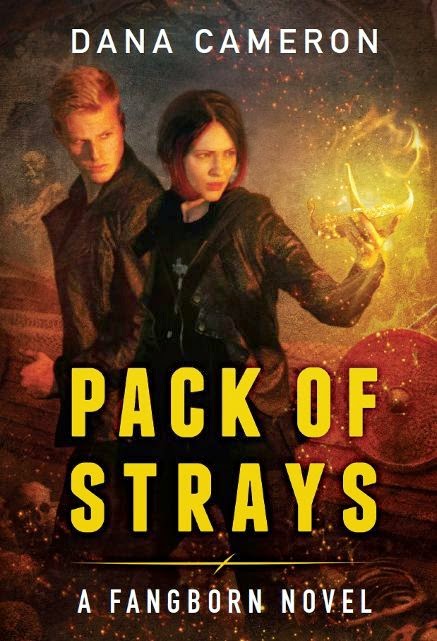 The second exciting novel in the Fangborn series.

Archaeologist Zoe Miller has only recently learned she is Fangborn, a secretive race of werewolves, vampires, and oracles dedicated to protecting humanity. But after she discovered and opened Pandora’s Box, the fabled item has lived up to its myth, and for Zoe and her friends, all hell has broken loose. Now she’s on a double mission: to prevent a politician from revealing the existence of the Fangborn and to foil the diabolical plans of the powerful Order of Nicomedia, a group dedicated to eradicating her kind.

But Zoe is also noticing disturbing changes in herself—new and unique abilities. Her visions are intensifying too, drawing her to faraway places to find more artifacts like the bejeweled bracelet embedded in her wrist.

In a world of dizzying shifts, who can Zoe trust? For while her former lover wants to turn her in, her former adversary seems dedicated to helping her mission succeed…

The second novel in Dana Cameron’s Fangborn series, Pack of Strays takes the fast-paced adventure of Seven Kinds of Hell to a whole new level! 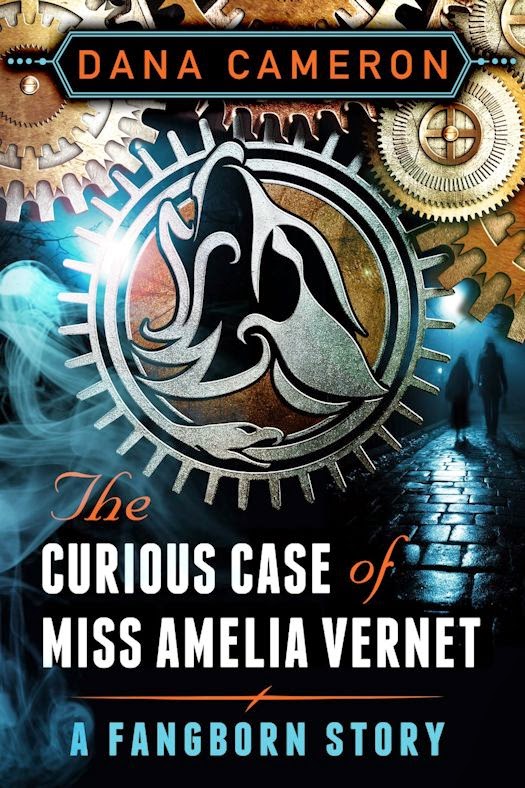 From the award-winning author of Seven Kinds of Hell comes an intriguing new tale that brings the supernatural thrills of the Fangborn world to Sherlock Holmes’s nineteenth-century London.

On the surface, Amelia Vernet appears to be the great detective’s quiet sixteen-year-old cousin. But her innocent exterior conceals an important fact: Amelia is a member of the Fangborn, a secret family of werewolves, vampires, and oracles sworn to protect Ordinary humans, and she uses her Fangborn werewolf gifts to help Holmes solve the curious cases that cross the doorstep of 221B Baker Street.

When the Baker Street Irregulars show up at Holmes’s residence with an unconscious boy in tow and reports of a kidnapping, the detective and Amelia spring into action—but the case quickly proves to be most perplexing indeed. And when they realize their new enemy’s terrible intentions, the pair must fight back with all their wits and strength before their lives—and those of all Fangborn—are destroyed forever.

Fangborn short stories may also be found in

"Pattern Recognition," in Murder and Mayhem in Muskego edited by John & Ruth Jordan (Trade Paperback, Down & Out Books, October 27, 2012)