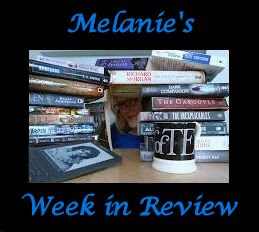 I was finally quite productive this week both with reading and with writing reviews. I was starting to get worried that I had lost my reading and review writing mojo but its back. So what did I read?

I started the week with a debut novel that the lovely Qwill sent to me. Revision by Andrea Phillips is the very first novel to be published by Fireside Fiction Company and will be released on May 5th. I will be writing a full review of this book so keep your eye on the blog next week to find out what I thought about it.


I turned to my Amazon recommendations (again...very bad) and found that the next book in the Seven series by Dannika Dark had been released. It wasn't long before Three Hours was on my Kindle. I have mixed views of this series. I liked book 1 Seven Years, thought book 2 Six Months was OK, did not like book 3 Five Weeks and back to another OK review for book 4 Four Days. Part of me wants to continue reading this story just so I can find out if Dark can get her characters to fall in love in a matter of seconds. There are 2 more books in this series. It's going to have to be love at first sight by the time we get to book 7!

This instalment starts a few years after the end of book 4 with Lexi and Austin still in love, Izzy and Jericho and Ivy and Lorenzo both have young children and Lexi's human sister Maizy is a tweeny. The story is told mainly from Naya's POV. Naya has appeared in most of the novels as she is Lexi's friend and former neighbour. Naya is an exotic dancer and secret panther shifter. Panthers are feared for being too violent so she has kept her shifter identity secret. When young women start to go missing from her strip club Naya approaches the wolf Alpha Austin for help. He assigns the tattooed Wheeler to be her bodyguard. Naya and Wheeler do not get along and the fireworks start when they are forced to spend more time in each others company. Hiding secrets is the theme in Three Hours as Naya isn't the only one who is keeping secrets. Wheeler has almost as many secrets as he has tattoos and Naya is determined to find out each and every one of them. The other sub-plot is the shifter cage fighting and the seedy underworld that Naya and Wheeler find themselves reluctantly involved in.

This book gets another 'OK' for me. Unlike some of the other female characters Naya is a bit more complex and more developed. She is obviously the most noble and well centered stripper in town who helps out her local animal shelter and came to Lexi's aid more than once. I had a hard time imagining what Wheeler was like besides being covered in tattoos. He also kept saying 'preciate ya' and talked about 'his woman' which I found annoying and misogynistic. I can't understand why the female characters in this series are so objectified and are always getting into trouble when not shaking their 'booty'. I was fully expecting the one book of the series that involved a stripper to have the most hot and steamy but it really didn't. Yes, there is a smoking hot sex scene but really only the one. This is quite refreshing as there is more romance in this PNR.

My final book for this week was a little bit different. The good people at Curiosity Quills Press rescued my copy of I Kissed a Ghoul by Michael McCarty. I had received a copy from NetGalley in a format I couldn't open, I forgot I had it and then when I went back to sort it out the book had been archived. I apologised for not reading it in time and within an hour the publisher was sending me another copy in a different format. Hurrah!

If you are looking for a light hearted read look no further than McCarty's I Kissed a Ghoul. The 'big boned' teenager Tommy has been desperate to lose his virginity and every time he thinks he is going to get lucky he is thwarted by one of the many supernaturals in his small town. This book is a mere 120 something pages of Tommy's desperate attempts to seduce almost every female in town while fighting off vampires, werewolves and cannibals. Tommy doesn't seem to think that any of these supernatural encounters are anything out of the ordinary which makes it all the more amusing. One particularly funny scene occurs when Tommy's parents go on vacation leaving him home alone. He watches Tom Cruise in Risky Business and with the help of his father's credit card decides to re-enact the movie. This had me chuckling all the way through. Tommy isn't especially likeable and does seem to be either incredibly naive or incredibly dim but even so, you can't help but feel a bit sorry for him. He is just an overweight teenager looking for love (or a desperate girlfriend who wants to have a lot of sex). If you are looking for something different, a few laughs and a quick read then this is the book for you.


That is it for me for this week. I hope you have a great week ahead and Happy Reading.