Please welcome Ken Liu to The Qwillery as part of the 2015 Debut Author Challenge Interviews. The Grace of Kings will be published on April 7th by Saga Press. 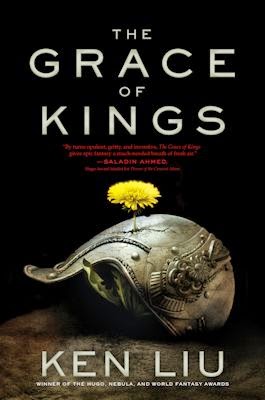 TQ: Welcome to The Qwillery. When and why did you start writing?

Ken:  I’ve been writing fiction in some capacity or another as long as I can remember. I suppose I finally became “serious” about writing when I was in college, and it was largely because I wanted to tell stories that I wasn’t seeing being published. I wanted to write stories about pieces of history that weren’t being covered in high school textbooks, to give voice to perspectives that weren’t represented, to present worlds that weren’t shown.

TQ: Who are some of your literary influences? Favorite authors?

Ken:  I think all writers are influenced to some degree of another by everything they’ve ever read, and I have too many favorite authors to list all of them. So I would answer this one by listing some choices that might not be often invoked: I really enjoy the craft with which Supreme Court Justices like Blackmun and Frankfurter crafted the narrative portions of their opinions to lay out the “facts” of the cases in their decisions. It is not often that we pay attention to the rhetoric used in these “stories” though they’re critical to the reasoning that follows. An awareness of the importance of storytelling to the law is critical for a lawyer, and quite useful to a writer.

TQ: You've written many short stories/novellas and you've won the Nebula, Hugo, and World Fantasy awards. What was the most challenging thing about writing a novel vis-à-vis short fiction? Did your writing process change?

Ken:  The biggest challenge is keeping track of all the choice that I made in the writing process. For a novel, there are many, many more worldbuilding decisions that must be made, and details of character, plot, setting, etc. that must be recorded and tracked and looked up later. I ended up having to learn how to use a wiki to track these things to keep basic continuity straight. For a pantser by nature, this was a tough transition.

TQ: Describe The Grace of Kings in 140 characters or less.

Ken:  A silkpunk epic fantasy in which two unlikely friends rebel together against tyranny only to find themselves deadly rivals near victory.

TQ: Tell us something about The Grace of Kings that is not in the book description.

Ken:  It is, without a doubt, an epic fantasy that pays more attention to the details of taxation than any other I know of.

I think the tax sections are pretty awesome and fun. And if I can make taxes fun for the reader, imagine what I can do for everything else …

Ken:  By analogy with steampunk, silkpunk is an aesthetic that straddles the boundary between science fiction and fantasy. It features a technology vocabulary derived from East Asian antiquity which relies on organic materials and biomechanics, and includes things like silk-draped airships with women warriors, soaring battle kites for honorable duels, underwater boats powered by steam engines, and lodestone-based metal detectors. It it also contains magical elements like tomes that describe our desires better than we know them ourselves, gods who regret the deeds done in their names, and giant sea beasts that bring about tsunamis and storms but also guide soldiers safely to shores.

The Grace of Kings is a re-imagining of the rise of the Han Dynasty in a new, secondary fantasy archipelago setting. This is a foundational narrative for Chinese literature much as the Iliad and the Odyssey are foundational narratives for the West. By re-imagining this story as an epic fantasy using tropes and narrative techniques drawn from Chinese and Western epic traditions, I’m trying to create a new, blended aesthetic that transcends the Orientalism and colonial gaze that tends to hobble many “magical China” narratives.

TQ: How does being a poet affect (or not) the narrative structure of The Grace of Kings?

Ken:  The overall structure of the novel draws from the oral traditions of Western epic poetry and Chinese pingshu storytelling. As such, I deliberately do many things against the conventions of contemporary epic fantasy: the main narrative will sometime be “paused” as we shift into a character backstory, and the POV shifts at multiple scales in a way that is reminiscent of pre-novel literary forms. The goal to make the story feel “new” by harking to the old.

TQ: What sort of research did you do for The Grace of Kings?

Ken:  I read the Sima Qian historical biographies of the early Han era, and consulted various secondary history sources as well as books about the evolution of technology. I also studied theories of technology and the history of epics (and re-read them!).

TQ: Who was the easiest character to write and why? The hardest and why?

Ken:  The easiest character was probably Kindo Marana, the tax-collector-turned-general. A lot of his musings on the nature of the tax system and how it applies to the rest of life are drawn from my own experience as a tax lawyer. The hardest character was Mata Zyndu, the honorable, martial hero whose view of justice seems out of step with the times. He’s a complicated character because his values and motivations feel alien to modern sensibilities. Trying to re-imagine him in a way that allows a contemporary readership to see why he was appealing and beloved in a different value system was challenging.

TQ: Which question about The Grace of Kings do you wish someone would ask? Ask it and answer it!

You talk a lot about “fundamental narratives” and “epic traditions,” but I don’t know anything about Chinese history or epic literature. Is the book fun?

Yes, oh yes. The whole point of a novel like this is to entertain. If you don’t know anything about Chinese history and the source material I’m working with, and you find that you don’t enjoy this book, then I will have failed utterly. It is meant to be fun and cool for all readers.

TQ: Give us one or two of your favorite non-spoilery lines from The Grace of Kings.

“Sometimes we live up to the stories other tell about us.”

“I think I wield power, but perhaps it is Power that wields me.”

Ken:  Working steadily on the sequel, which is going to be bigger, cooler, and feature lots more exciting silkpunk technology. I don’t want to give it all away, but the daughters and sons of Dara do some amazing deeds that make me laugh with glee.

Ken:  Thank you for having me! 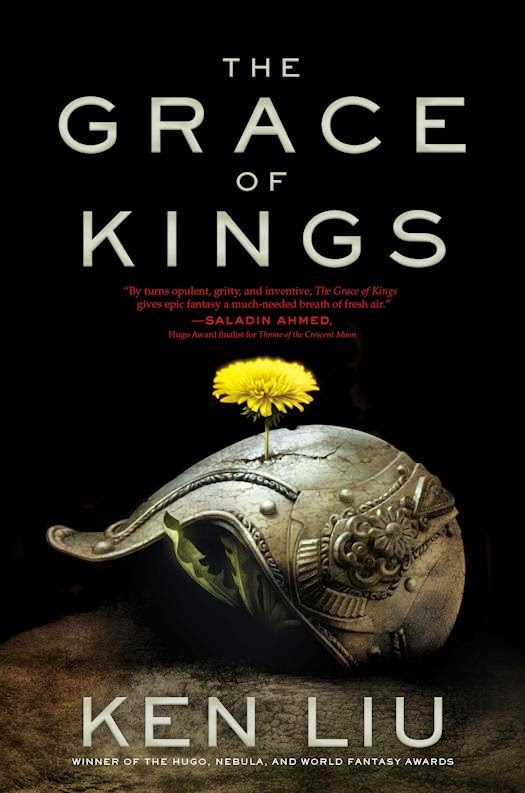 Two men rebel together against tyranny—and then become rivals—in this first sweeping book of an epic fantasy series from Ken Liu, recipient of Hugo, Nebula, and World Fantasy awards.

Ken’s fiction has appeared in F&SF, Asimov’s, Analog, Strange Horizons, Lightspeed, and Clarkesworld, among other places.

Ken is the only author in the last forty years to be the recipient of the Hugo Award, the Nebula Award, and The World Fantasy Award for one story. That story is "The Paper Menagerie". He has also been awarded another Hugo for his story "Mono No Aware", and was just nominated for yet another Nebula Award this year for his novella "The Regular", alongside the Nebula nomination for his translation of Liu Cixin's The Three-Body Problem, which is up for Best Novel of the year.

Ken’s debut novel, The Grace of Kings, the first in a fantasy series, will be published by Saga Press, Simon & Schuster’s new genre fiction imprint, this April 2015. Saga will also publish a collection of his short stories in Fall 2015.

Ken is busily working on the sequel to The Grace of Kings and expects it to be out in 2016. He is also busy working on short fiction and translation projects.

He lives near Boston. Besides writing and spending time with his family, Ken loves to repair vintage typewriters, patiently taking them part to learn how they work.