Please welcome Katie Lightfoot to The Qwillery. Katie is part of the Honeybee Bakery in Savannah, Georgia and is featured in the Magical Bakery Mystery series by Bailey Cates.  Katie's not just a baker!

Katie:  Thanks! It's a pleasure to be here.

TQ:  Tell us how you ended up in Savannah working in the Honeybee Bakery. How did the bakery gets its name?

Katie:  After I went to pastry school I ended up as an assistant manager in a bakery in Akron. The pay was low and the hours were long, but I was engaged to a man I mistakenly thought was the love of my life. We broke up shortly after my uncle Ben retired from his job as Savannah's fire chief. He and Aunt Lucy wanted to start up a bakery, and I was ready for a change. So we pooled our resources, I moved to Savannah, and we started up the Honeybee Bakery. The name "Honeybee" comes from Lucy's orange tabby cat. Almost all orange tabbies are male, but my aunt's is a very elegant girly girl. In fact she's special in many ways.

TQ:  What is your biggest selling item in the bakery?

Katie:  That depends on the time of year. Spicy goodness in the fall and winter, of course, and lighter, often fruit filled pastries in the spring and summer. Anything with chocolate flies out the door, and Southern staples like peach-pecan mini pies, red velvet whoopie pie, caramel cake, or banana bread pudding are always big hits with locals and tourists alike.

Katie:  My days tend to start early. Like, crazy early. I usually don't have to be into work until about five, a.m. but I get up as early as three o'clock. Luckily, I don't need much sleep -- three or four hours at the max, and as little as one hour will often do me fine. I try to fit in a run in the mornings, though in the winter I tend to run after work. I spend most days in the Honeybee kitchen, baking away and working with Lucy to develop new recipes. In the evening I might get together with either Declan McCarthy or Steve Dawes, hang out with my neighbor Margie and her kids, or spend time with the ladies of the book club that Lucy introduced me to. More often than not, though, I hang out at home with my Cairn terrier, Mungo, either in my extensive garden or practicing my newfound...abilities.

Unless I get involved in a murder investigation. That seems to happen to me a lot since moving to Savannah. Then my schedule tends to go out the window.

TQ:  We understand that not just herbs and spices go into the baked goods. Tells us about what is happening behind the scenes at Honeybee Bakery.

Katie:  Well, speaking of newfound abilities! The Honeybee wasn't even officially open when a woman was killed and Uncle Ben became a suspect in her death. We were all in a panic, of course, and the situation prompted Lucy to tell me that I'm a hereditary hedgewitch. Did I believe her? Of course not. But eventually she convinced me -- with the help of that book club I mentioned. It's a spellbook club, actually, and while we do study spell books, it's also a rather informal coven of witches. Everyone has a different magical focus, and Lucy and I are what some call green witches. So we access and activate the magical properties of herbs, spices, and even certain foods to help Honeybee customers. For example, did you know that sage increases wisdom and memory (it's also antibacterial) and cloves and cinnamon promote financial gain? Rosemary encourages fidelity, and basil is a basic protection herb. Gosh, I could go on and on.

TQ:  Who is Declan McCarthy? What would we find in your and Declan's picnic basket?

Katie:  Ah, Declan. Well, he's a firefighter and practically the son Uncle Ben never had. He's tall and blue-eyed and classically handsome, a real man's man -- except he was raised in a houseful of women, is sweet as they come, and can cook up a storm. On our most recent breakfast picnic he spoiled me with Low Country shrimp, Tasso ham and cheese grits, and buttermilk biscuits as flaky as any I could make and thickly slathered with spicy peach jam. Yum! Oh, and freshly squeezed orange juice to top it off. It was really too bad that dessert came with a dead body.

TQ:  What has been your most challenging mystery to solve so far?

Katie:  They're all challenging! I mean, I'm just a baker who happens to have found out she's also a witch, not a detective. Though after this last murder I was involved with it sounds like I have some kind of "calling". Bah! I'd know if I had a dang calling, wouldn't I? Anyway, the first time I was dragged into investigating murder it was because I felt I had to clear Uncle Ben's name. Not much choice there, right? I just had to step in. And boy howdy, did I ever learn a lot about myself in the process!

The second time I actually found a body in Johnson Square. I didn't intend to have anything to do with that case after I gave the detectives my statement, but then those darn druids showed up. It became pretty obvious I needed to do something about the situation because the police didn't know anything about the magical aspect of the murder.

Then I'm quietly volunteering at an environmental non-profit, and it happens all over again.

TQ:  As a new witch what do you have to do to practice your skills?

Katie:  I'm just the luckiest witch ever, even if I do say so myself. I have Lucy to teach me the hereditary hedgewitch part of the craft, and the rest of the spellbook club to instruct me in their areas of expertise. Mimsey Carmichael, who would be the coven's leader if we were that kind of group, owns a flower shop and practices flower and color magic. She's also the best at divination, which I practice but still have trouble with. Bianca Devereaux is a classically trained Wiccan who has a special love of moon magic. Jaida French practices tarot magic, and Cookie Rios is relatively new to our kind of magic, though her father was a voodoo priest. I keep track of my progress in my grimoire, which is a kind of personal spell journal, and keep my personal altar hidden in a secretary desk in the loft of my little carriage house in Midtown Savannah. Mungo, my Cairn terrier and familiar, helps out in his doggy way as well.

TQ:  Do you think that baking a cake is the same as brewing potions?

Katie:  Absolutely! In fact, I think of my grimoire as a kind of recipe book. I have one at the bakery for our recipes there -- complete with magical additions as appropriate -- so why not for spells? Every really good cook is performing a kind of magic with ingredients, heat, agitation and time when she (or he) puts together a scrumptious dish. Sharing that food with others is another layer of magic in the world.

TQ:  Thank you for joining us today and good luck at the bakery.

Katie:  Oh, I've had such fun answering your questions. Thanks for having me over for a spell (haha). 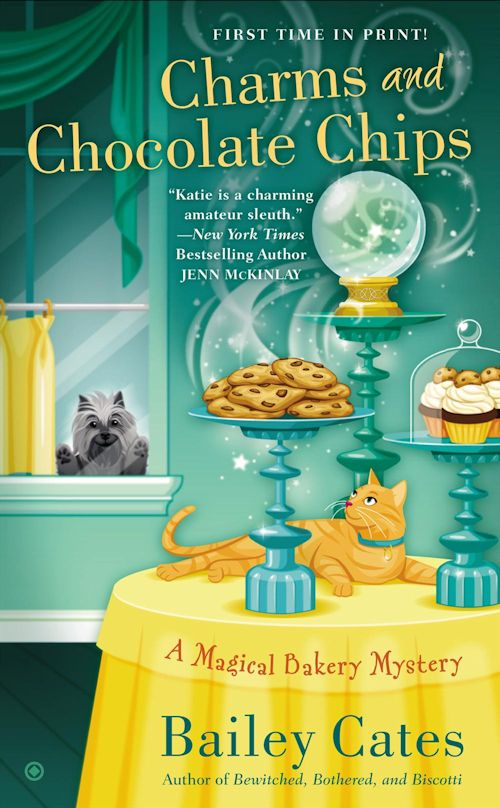 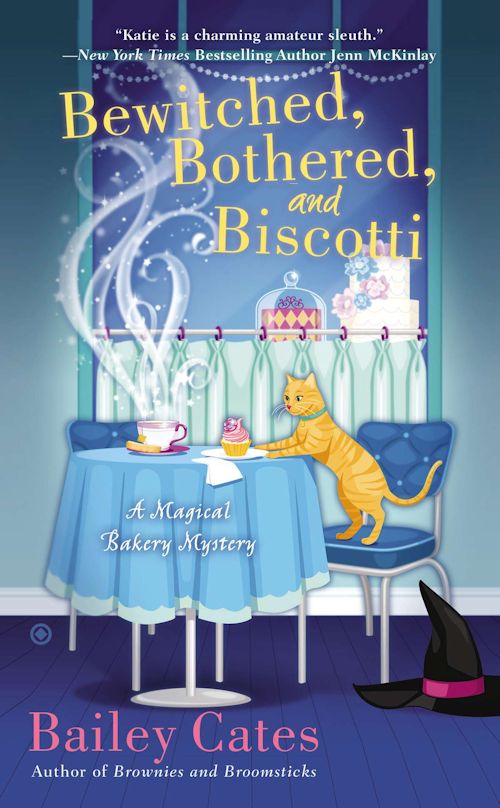 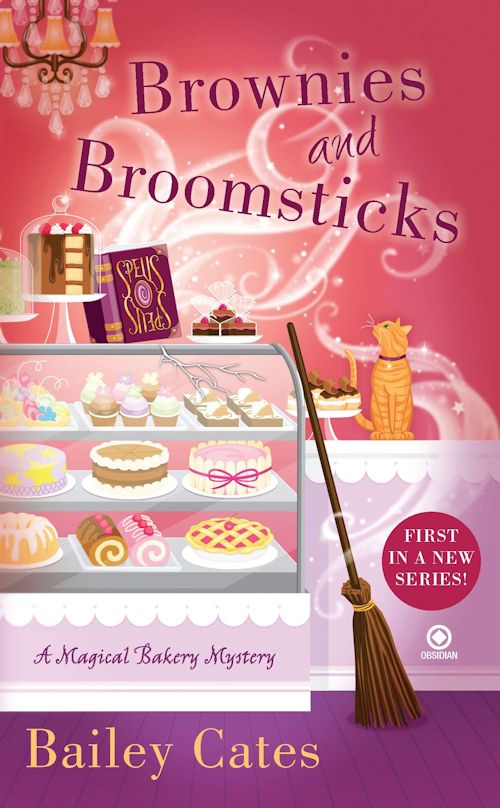 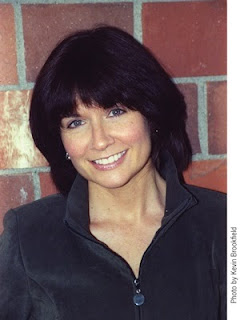 Bailey Cates believes magic is all around us if only we look for it. She writes the Home Crafting Mysteries as Cricket McRae, and in September. 2013. her standalone western mystery, Shotgun Moon, will be released (as K.C. McRae). The third Magical Bakery Mystery, Charms and Chocolate Chips, will release in November, and she is currently working on the fourth in the series, Some Enchanted Eclair. For more information about Bailey and her books please visit www.cricketmcrae.com.

What:  One commenter will win a Mass Market Paperback copy of Bewitched, Bothered, and Biscotti (A Magical Bakery Mystery 2) from The Qwillery.