Tatters:  Thanks for asking me. Interesting place. Lots of new smells.

TQ:  Tell us about yourself.

Tatters:  Nothing I like better. I'm proud to say that I'm mostly Irish wolfhound, with just a touch of lower species thrown in. We're the tallest of all dog breeds and long ago in the U.K., only nobles were allowed to own us. Nowadays anyone can own and breed us, if they have the nerve. We can look kind of intimidating but we’re a lot more sociable than people think. I get along well with most humans, even little ones, as long as they don't pull my tail or poke me in the eyes.

TQ:  Tatters, could you tell us how you came to live with Clara and Stephanie Quinn (cousins and owners of The Raven's Nest bookstore)?

Tatters:  Oh, I don't live with Stephanie. She's always complaining about allergies. I live with Clara and Jessie, her mother. I used to live with Rick and his wife. Rick owns the hardware store across from the Raven's Nest bookstore. Anyway, Rick got divorced and his ex-wife's boyfriend was afraid of me so I went to live with Rick. Wolfhounds don't like being left along too long. We tend to tear things apart to relieve the boredom. Rick took me to the hardware store, but my tail kept sweeping stuff off the shelves. When Clara came into the store I fell in love with her right away. She's a kind, smart, pretty lady and Rick's nuts about her. Anyway, they were talking and I heard the word 'pound' mentioned. I thought I was doomed, but the next thing I knew Clara was taking me home. I've been there ever since. Clara has this weird sixth sense thing where she has visions and can see into the future. Sometimes she can read people’s thoughts, but what’s really weird, she hears what I’m thinking. It's awkward at times, especially when people hear us talking to each other.

Tatters:  I sleep on Clara's bed at night, so I get up when she does. I take a stroll in the back yard and sniff around for intruders, have some breakfast, then I hang around Clara until she leaves for the bookstore. I usually sleep until Jessie gets home from work in the afternoon. Jessie is a bit of a grouch and a little too bossy, but we get along okay.

TQ:  You have a reputation for being a bit 'unmanageable'. Do you think this is a fair assessment?

Tatters:  Who, me? Unmanageable? Who said that? Why, I’m the sweetest, most obedient dog you’ll ever meet. Okay, so sometimes I get excited and forget how big I am. I bump Jessie and Clara off their feet now and then. I like to go for walks, and I get a little impatient if I have to wait too long, and sometimes Clara says my thoughts are impudent, whatever that means. I might take up too much space on Clara’s bed, but I keep her warm on cold nights. What more could you ask?

Tatters:  Absolutely. I’d die for those I love, and defend them to my last breath. I’m companion, protector, savior and my wet nose on a cheek can dry tears in an instant. What human can say that?

TQ:  Where is your favorite place to hide your bones?

Tatters:  Do you really think I’d tell everyone that? If you must know, you might look under Jessie’s favorite rose bushes in the backyard. Don’t tell her, though. She’d hide my food dish.

TQ:  Some say you are really the hero of the story. Is that true?

Tatters:  Aw, shucks. Well, I try. I love helping Clara and Stephanie investigate a murder, and I’m always on guard, ready to protect them. I’m faster and a lot more frightening when I’m riled up, so they’re always happy to have me along. Even if Stephanie does complain about her allergies.

Tatters:  Thanks for asking me! It’s always a pleasure to talk about myself. Don’t forget to visit the Raven’s Nest bookstore when you’re in Finn’s Harbor. It’s on the coast of Maine. You won’t see me in there, I do too much damage with my tail, but you’ll find some great books – lots of fantasy and science fiction. Stephanie’s a huge fan of Edgar Allan Poe. Happy Reading! 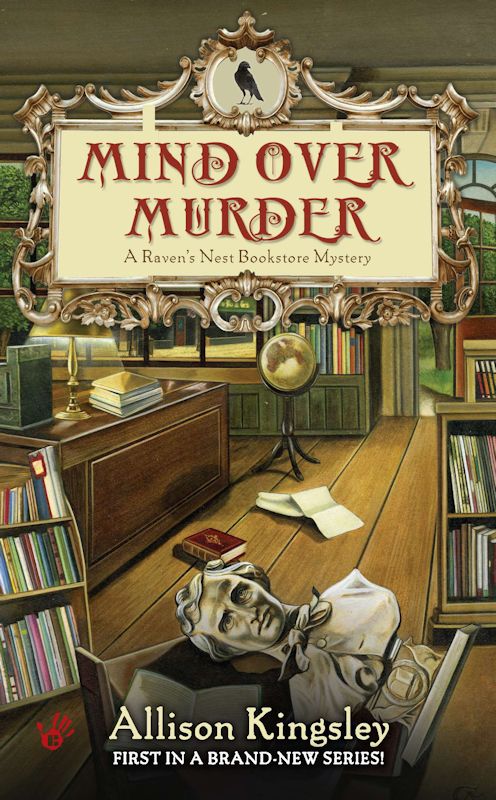 Cousins and best friends, Clara and Stephanie Quinn run The Raven's Nest Bookstore, where people go to find their most coveted reads. But they have no idea it's the psychically-gifted Clara who's reading them...

The bookstore has made an enemy of the town crier, Ana Jordon, who claims that the store's occult collection is "poisoning" the town's youth. Meanwhile, the store's number-one employee, Molly, has made no secret of her anger over Ana's antics. So when Ana is found dead, killed by the bust of Edgar Allen Poe sculpted by Molly, the evidence is stacked against her. And Clara must rely on her gift to make sense of this senseless murder... 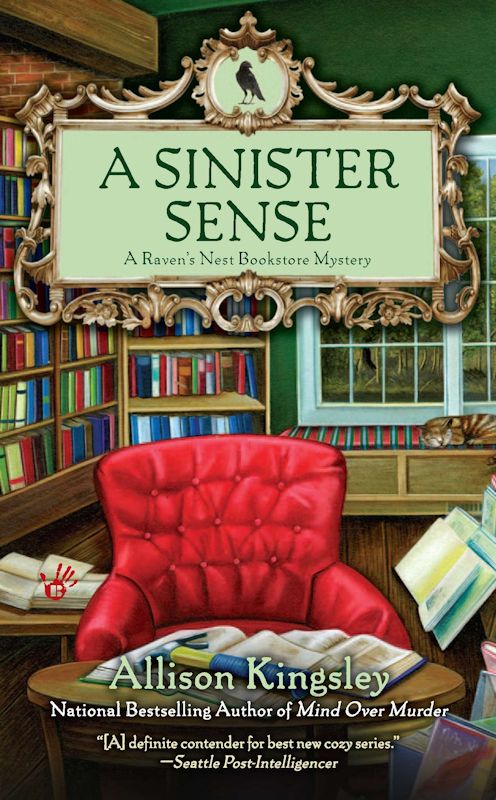 Visions of the future and turning into people's thoughts come naturally to Clara Quinn thanks to her inherited Quinn Sense. Unfortunately, it offers no insight into her love life—or lack thereof—especially where hardware store owner Rick Sanders is concerned. But even though she's still nursing a broken heart, Clara offers Rick a home for his troublesome dog, Tatters.

But Tatters is the least of Rick's problems when a dead body is discovered in the back of his truck. The victim was seen in the hardware store—and bludgeoned to death with a hammer stolen from there. Clara believes Rick is innocent, but she's not sure whether that belief comes from the Quinn Sense in her head or simply from a desire in her heart... 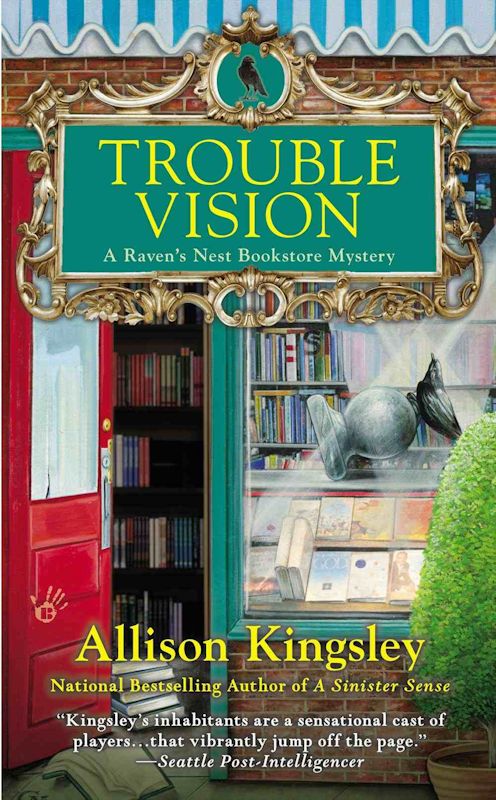 In quaint Finn’s Harbor, Maine, cousins and best friends Clara and Stephanie Quinn run The Raven’s Nest bookstore. But thanks to Clara’s ability to read minds and see the future, selling books sometimes gets shelved in favor of saving lives…

When the new mayor calls a press conference about the controversial hotel resort being built on the edge of the city, the residents of Finn’s Harbor have an opportunity to express their concerns about traffic and tourists. But when the debating turns into outright fighting, Clara gets a premonition that’s nothing but trouble.

While Stephanie is enthralled with her cousin’s vision, Clara just wants it to go away. Then a customer comes into The Raven’s Nest talking about a fatal fall at the hotel’s construction site, and Clara knows better than to ignore her Quinn Sense. In a town full of citizens who want the project to fail, Clara and Stephanie have to figure out who made the jump from anger to murder… 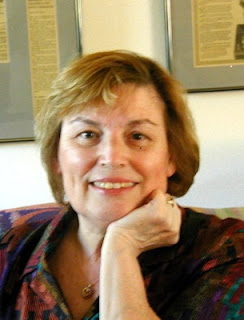 Allison Kingsley has been writing romance and mysteries for twenty-five years. She has published over sixty novels and two short stories. She lives on a golf course in Oregon with her husband, Bill, and Tippi, a rat terrier who thinks she’s a Great Dane. When she’s not playing golf, she’s either going camping with her husband in their motor home, or analyzing movies on TV.

What:  One commenter will win a Mass Market Paperback copy of Trouble Vision (A Raven's Nest Bookstore Mystery 3)  by Allison Kingsley from The Qwillery.