Please welcome Maxie Malone to The Qwillery. Maxie is featured in the Haunted Guesthouse Mystery series by E. J. Copperman. She's a former interior designer and a ghost with an attitude (that I'm sure manifested when she was among the living).

Maxie:  Yeah, whatever. What's the deal here? Books? I like books. Don't tell anybody.

TQ:  Please tell us a bit about yourself. For example, what did you do prior to becoming a ghost?

Maxie:  "Becoming a ghost"? It wasn't a career choice, believe me. I got killed. But before that, I was getting pretty well known as an interior designer. I do things other people won't think of. If the girl who runs my house now (Maxie owned the house until she was murdered, at which time Alison bought it) would listen to me, we'd have some rockin' room design, I can tell you.

TQ:  So... what do you think of Alison Kerby? What would you like to change about Alison's guesthouse?

Maxie:  Alison? Is that her name? What would I change? EVERYTHING. First, I'd change that I'm not dead and I still own the place. But if I couldn't do that, it would be all about darker wall colors and more challenging designs. Everything SHE does is so easy on the eye, so conventional. She's not trying to shake anybody up. It's like the place was designed by Benjamin Moore.

TQ:  Do you enjoy sharing the guesthouse with another ghost, PI Paul Harrison?

Maxie:  Enjoy? No! I'm dead--there's not much that's fun about that. Besides, Paul SHOULD have kept me from getting killed--he was the PI that I hired to keep me safe, and look how that turned out. He's not a bad guy, really, but he roped me into this crazy arrangement where he and I do spook shows for the guests in this place twice a day. He gets what's-her-name's help in investigations he wants to do, SHE gets more guests for her house, and what do I get? Nothing. Luckily, her daughter Melissa is a great kid, and I get to spend a lot of time with her because we're roomies up in the attic.

TQ:  What is the most harrowing mystery that you've been involved in?

Maxie:  I don't get involved when I don't have to. I do the research when Paul asks me to, because I'm a computer whiz and one thing about being dead is that you have a LOT of time on your hands. But sometimes the crime comes home, and that gets to be a problem. I have to watch out for Melissa, and for Loretta, Melissa's grandma. Mrs. Kerby is a sweetheart, and I don't like it when she and Melissa get in trouble.

TQ:  If you could, would you leave the guesthouse? Would Alison be able to get along without you?

Maxie:  Hey. I CAN leave the guesthouse. I can get out right now; I figured out how to do it a while back. But without a car or a plane or something, I'd pretty much have to walk anywhere I want to go. Even what the living people call "flying" is really just us ghosts walking, just not on the ground. Takes too long to get anywhere. And I'd miss Melissa.

TQ:  Do you get along with Alison's Mom? Do you think its odd she is dating a ghost?

Maxie:  I love Mrs. Kerby. She's like my mom, only she can see ghosts, which my actual mom can't. My mom, whose name is Kitty, shows up every now and then to talk, and I might start going back home to our house once in a while sometime. But Mrs. K.? She's the best. She cooks dinner all the time because her daughter never learned how to do it, and even though I can't eat or smell it or anything, I'm sure she's a terrific cook. And hey, she wants to date a ghost, I say, more power to ya. I'd like to figure out how to do that, myself.

TQ:  What do you miss the most about being corporeal?

Maxie:  GUYS! I'm only 28 years old. You can't imagine what a drag it is to see a cute guy and not be able to do anything about it. And the guys I can talk to are, let's face it, dead. BIG turn-off.

Maxie:  Hey, it was cool. I didn't think I'd like it, but I did. Stop by the house sometime--maybe we can scare somebody together! 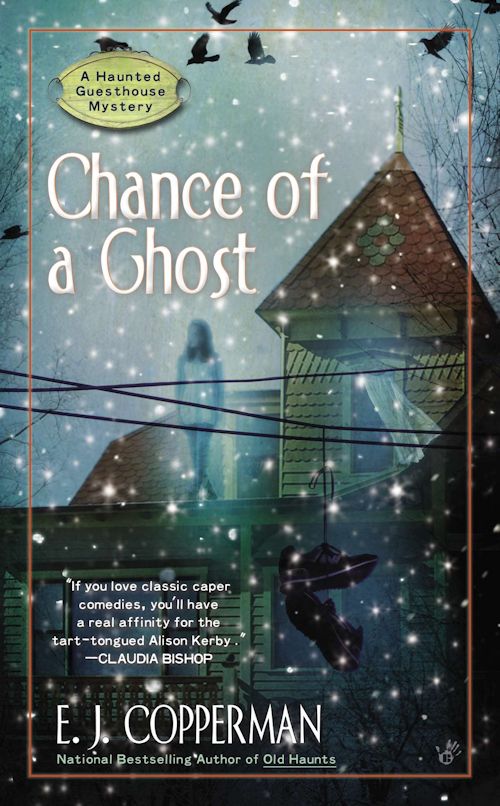 Alison Kerby’s guesthouse is haunted all year round. Surviving the dead of winter, though? That’s a spooky proposition.

Even with a blizzard bearing down on New Jersey, Alison can count on at least two guests—Paul and Maxie, the stubborn ghosts who share her shore town inn. Then there’s her widowed mother, who hasn’t just been seeing ghosts, she’s been secretly dating one: Alison’s father. But when he stands her up three times in a row, something’s wrong. Is he a lost soul…or a missing apparition?

Their only lead is an overdramatic spirit—stage name Lawrence Laurentz—who doesn’t take direction well and won’t talk until they find his killer. Alison will reluctantly play the part of PI, but when the clues take a sinister turn, the writing is on the wall: If Alison can’t keep a level head, this will be her father’s final act—and maybe her own. 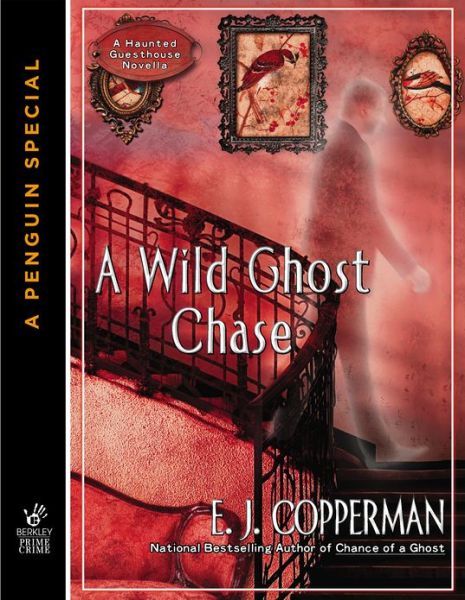 Phantom PI Paul Harrison from the national bestselling Haunted Guesthouse mysteries returns with a tale of his own in a house full of ghosts, secrets, and spectacular oceanside views…

Three years ago in a large Victorian house on the Jersey Shore in the town of Harbor Haven, fledgling private investigator Paul and his client, Maxie Malone, were murdered. Since then, recent divorcee and reluctant ghost whisperer Alison Kerby and her 10-year-old daughter Melissa have moved in and converted the place to a guesthouse, where Maxie and Paul are now checked in for an eternity and ready to solve any case that comes their way—or at least spook the guests (who love it).

Alison’s got a lot on her plate at the moment, however, so when Paul discovers the three-hundred-year-old ghost of a small boy in the house, he decides not to involve her in the case. The boy, named Eagle of the Sun, says he’s searching for his missing mother. Paul’s happy to help Eagle of the Sun find her, though something about the boy’s story doesn’t add up. But why would a lost little ghost lie?

Includes a preview of the next Haunted Guesthouse Mystery, Chance of a Ghost, available February 2013 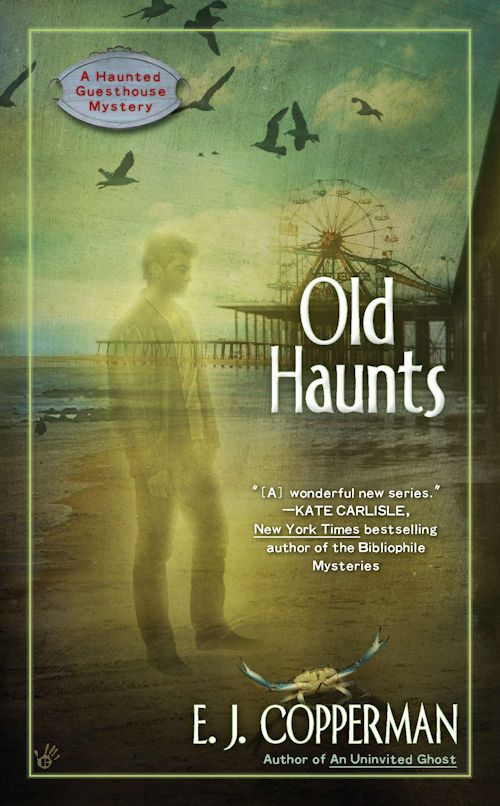 The ghosts haunting Alison Kerby's Jersey Shore guesthouse are sad. Maxie wants to know who murdered her ex-husband, and Paul pines for his still-living almost-fiancee. The only one who isn't missing her ex is Alison-because The Swine just arrived on her doorstep... 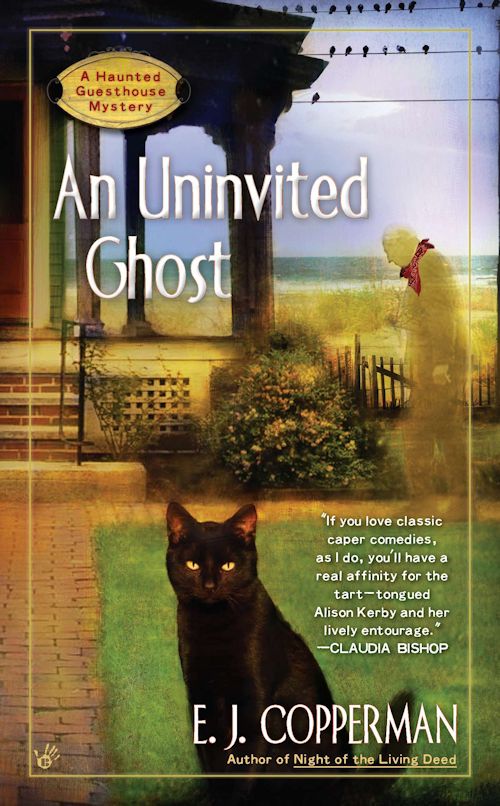 Alison and her resident gumshoe ghost are on their next case when the deceased Scott MacFarlane floats in worried that he accidentally killed a prominent local woman. Turns out she's still alive...that is, of course, until she's murdered-in Alison's house. Now, between the demands of her guests and the arrival of a reality television crew, Alison must find the killer before she sees reality from the other side. 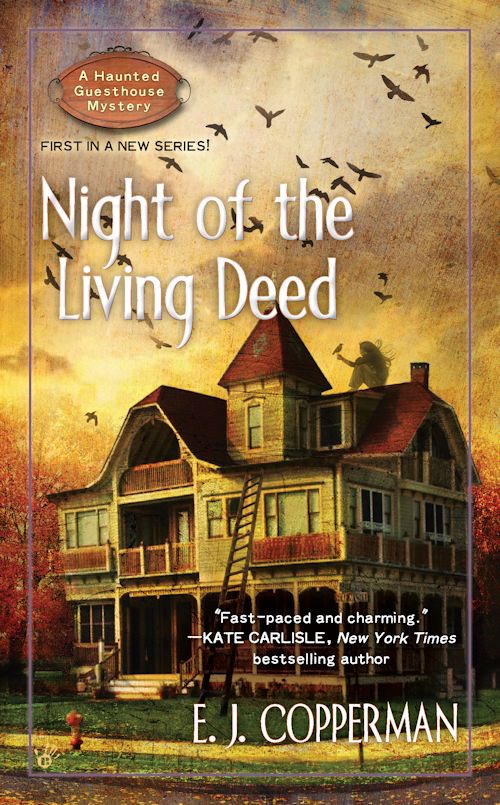 Welcome to the first Haunted Guest House mystery-the getaway every reader can afford.

Newly divorced Alison Kerby wants a second chance for herself and her nine-year-old daughter. She's returned to her hometown on the Jersey Shore to transform a Victorian fixer-upper into a charming-and profitable-guest house. One small problem: the house is haunted, and the two ghosts insist Alison must find out who killed them. 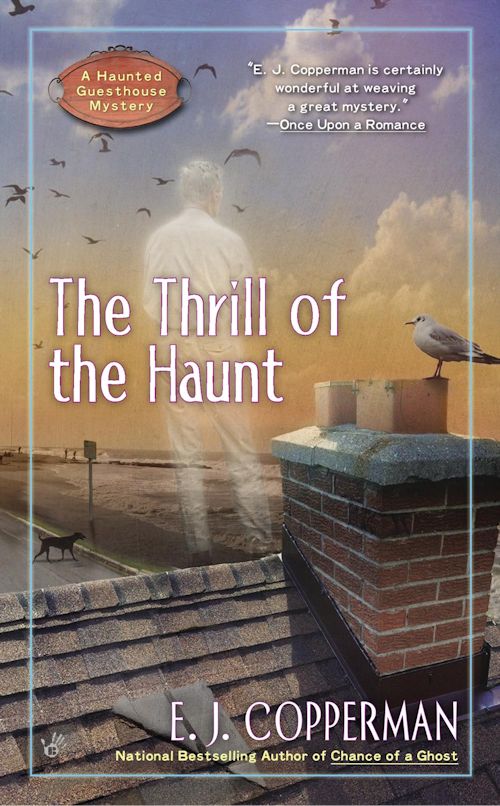 Alison Kerby’s guesthouse is already crowded with spirits. The last thing she needs is a whole new batch of haunts settling in.

As Alison’s reputation as “the ghost lady” grows, so does her business—and not always in a way she’d like. Tourists may be flocking to her guesthouse for a chance to glimpse her resident spirits, but her special abilities are also bringing unwanted private investigation cases to her door. And she has no choice but to take a case when the local homeless man is found murdered under mysterious circumstances, just hours after asking for help in exorcising a specter.

If that weren’t enough to deal with, Alison’s other PI case soon turns fatal, as the mistress she was spying on for a jealous wife turns up dead as well. The cases seem like they couldn’t possibly be linked, but with a mountain of clues, motives and suspects—both living and dead—Alison will have to think fast before someone else checks out for good…

E.J. Copperman is the author of the Haunted Guesthouse mystery series, which began with NIGHT OF THE LIVING DEED and continued with AN UNINVITED GHOST, OLD HAUNTS and CHANCE OF A GHOST. The fifth book in the series, THE THRILL OF THE HAUNT, will be published November 5. In October, an e-book novella, AN OPEN SPOOK, will be published by Berkley for e-readers only. E.J. is an award-winning author and freelance reporter whose work has appeared in the New York Times, USA Weekend, TV Guide and Entertainment Weekly, among others. E.J. lives in New Jersey with 6 million very close friends.

What:  One commenter will win a Mass Market Paperback copy of Chance of a Ghost (A Haunted Guesthouse Mystery 4) from The Qwillery.