Please welcome Bailey Ruth Raeburn to The Qwillery. Bailey Ruth is the main character in the Bailey Ruth Mystery novels by Carolyn Hart. Bailey works for Heaven's Department of Good Intentions and returns in Ghost Gone Wild in October.

Bailey Ruth:  I love appearing and a blog known as The Qwillery intrigues me.

TQ:  Tell us a little about yourself. How did you end up working for Heaven's Department of Good Intentions?

Bailey Ruth:  When I was young, a daring sailor rescued me when I fell off an excursion boat to Catalina. Thanks to him, I grew up to have a happy and satisfying life. In Heaven, I wanted to try and repay that debt so I volunteered at the Department of Good Intentions, hoping I could return to earth to do someone else a good turn.

Bailey Ruth:  Wiggins is big-hearted, kind, and always hopeful that emissaries from the Department will follow the rules for earthly visitation ,which include a prohibition against appearing unless absolutely necessary.

TQ:  Why do you think you are so good at solving mysteries?

Bailey Ruth:  I love being in the middle of everything. Perhaps my years working for the Adelaide Chamber of Commerce gave me insight into the hopes, desires, and fears involved in personal relationships. Besides I had a husband, two kids, and was involved at the church. And that is enough background in mystery solving for anyone.

TQ:  You keep returning to Adelaide, Oklahoma, which is where you lived prior to becoming a ghost. Tell us a bit about Adelaide. Would you like to solve mysteries anywhere else?

Bailey Ruth:  Adelaide is a bustling small town in south central Oklahoma, inspired by the author's husband's hometown of Ada, Oklahoma. It is a bit of America, familiar to all readers whether their 'small town' is a New York neighborhood, a New England township, or a dusty west Texas city. I have often suggested to Wiggins that I would delight in a posting to Paris but so far he seems determined to return me to Adelaide.

TQ:  As a ghost how do you make contact with your friends without scaring them?

Bailey Ruth:  That is a challenge. Ordinary people become quite unnerved when confronted with the inexplicable. I try to reassure them that I have their best interests at heart though they often urge me to please, please go elsewhere. However, I am always determined to complete my assignment.

TQ:  What is your favorite part about working for Heaven's Department of Good Intentions? Least favorite?

Bailey Ruth:  Finding out who I am going to help and what kind of trouble they are in. In GHOST GONE WILD which comes out in October, a scruffy but appealing young man with an abiding interest in Featherfoot spiders got himself into an awful mess!

Least favorite: Hearing the clack of the wheels of the Rescue Express before I've completed my assignment.

Bailey Ruth:  The pleasure is mine. And if you run into any problems, the Department is always ready to help.

TQ:  Thank you! We'll keep that in mind. 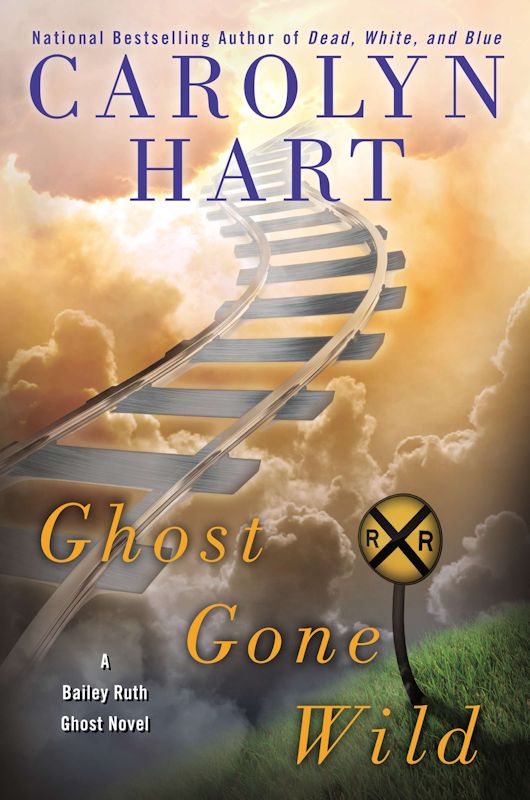 Carolyn Hart’s “irresistible cozy sleuth”* is back—good-hearted ghost Bailey Ruth Raeburn just can’t say no to an earthly rescue, even when maybe she should…

Bailey Ruth loves to return to earth as an emissary from Heaven’s Department of Good Intentions. Problem is, she’s a bit of a loose cannon as far as ghosts go—forgetting to remain invisible, alarming earthly creatures—so she’s far from the top of department head Wiggins’s go-to list for assignments.

That’s why she’s surprised when the Heaven-sent Rescue Express drops her off at a frame house on the outskirts of her old hometown, Adelaide, Oklahoma, where a young man is playing the drums. What kind of rescuing does he need—drum lessons? But when a window cracks and a rifle barrel is thrust inside, only Bailey Ruth’s hasty intervention saves Nick Magruder from taking a bullet. When she materializes to reassure him, she finds she can’t go back to vanishing. What gives?

It turns out she’s been tricked by Nick’s late aunt—Delilah Delahunt Duvall—to come to the young man’s rescue, which means she isn’t back on earth in service of the department. Wiggins has no idea where she is—and now she may be trapped in Adelaide forever. Unless she can help Aunt Dee snare the person who wants her nephew dead… 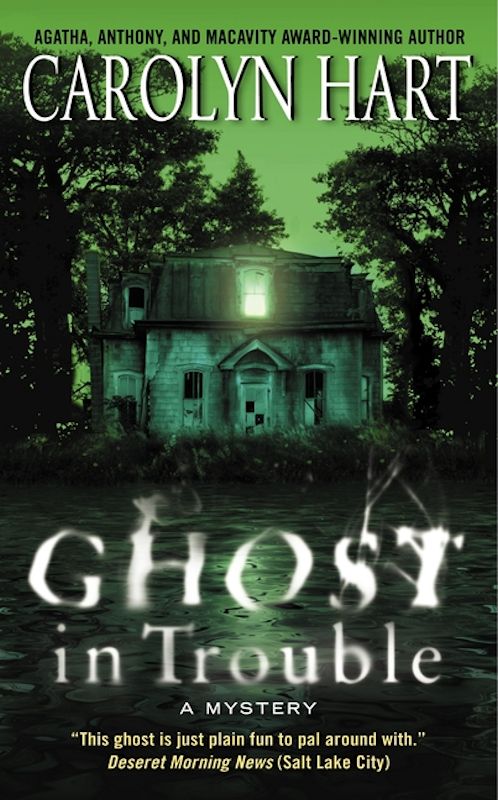 When Bailey Ruth Raeburn passed over into the great beyond, she was delighted to discover her sleuthing days would last an eternity—joining Heaven’s Department of Good Intentions to help those in need and ensure the wicked get their just deserts.

On her latest mission, Bailey Ruth’s finding it difficult to adhere to boss Wiggins’s rules for good spirit deportment. The endangered woman she’s supposed to save happens to be one of Bailey Ruth’s oldest enemies—and she’s determined to thwart the ghostly sleuth’s good intentions at every turn. There’s only so much any person, living or dead, can put up with! But to solve her toughest case yet, Bailey Ruth will have to manage her recalcitrant charge somehow—while dealing with a fraudulent medium, a mother’s heartbreak . . . and a telltale rawhide dog bone. Heaven help her!

Christmas is a time for family and giving, and a wealthy woman in Adelaide, Oklahoma, is about to embrace both. Discovering that she has a young grandson, the dowager decides to change her will to leave the bulk of her fortune to the young boy—an alteration that stuns the rest of her family. But a scrooge of a determined heir makes sure she never signs the new document. When she is found dead, it's up to that irrepressible spirit Bailey Ruth—on assignment from Wiggins and Heaven's Department of Good Intentions—to protect a little boy, foil a murderer, and save Christmas.

There's only one teeny hitch: how can Bailey Ruth figure out which family member was desperate enough to kill when everyone has a motive? 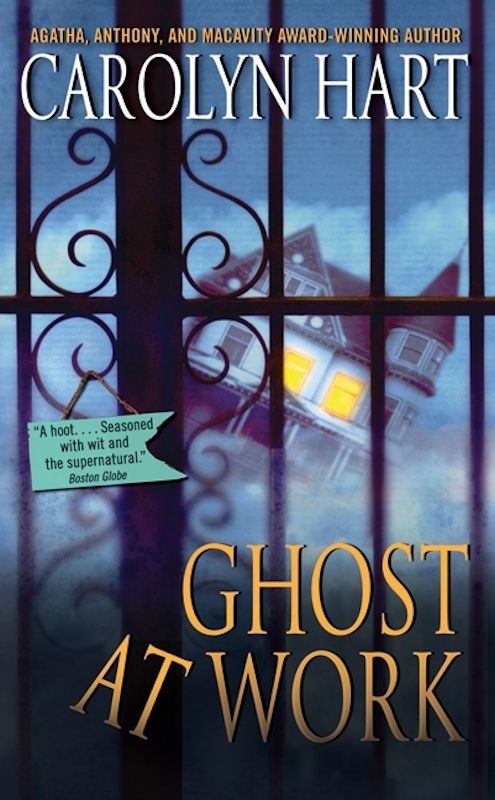 Bailey Ruth Raeburn always had a knack for solving mysteries. Why should a little thing like being dead change anything?

Bailey Ruth's unique position as a ghost makes it possible for her to lend a helping hand to her former neighbors in Adelaide, Oklahoma. And the rector's wife, Kathleen Abbott, needs all the help she can get. There's a dead man on her porch, and once the body's discovered the rector's bound to be murder suspect number one.

An agent of Heaven's Department of Good Intentions, Bailey Ruth's eager to head back to the mortal plane to extricate Kathleen from a dire situation. Wiggins, Bailey Ruth's fussbudget supervisor, has already advised her about the rules: she's to be on the earth, not of the earth. But to bring a killer to justice, she just might have to bend a heavenly rule or two . . . 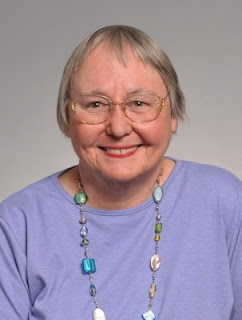 Carolyn Hart’s 50th novel DEAD, WHITE AND BLUE was published in May. It is the 24th in the Death on Demand series. Her series include 23 Death on Demand titles, 3 Bailey Ruth Raeburn titles, and 7 Henrie O titles.

She is also the author of a half dozen suspense novels. Also new is the e-book edition of CRY IN THE NIGHT, a thriller set in Mexico City, which will be available in paperback in December. Seventh Street Books in June published her WWII novel ESCAPE FROM PARIS, which is a Random Library Summer Book Club Pick.

Hart was one of ten mystery authors featured at the 2003 National Book Festival on the Mall in Washington D.C. In March 2004, she received the Arrell Gibson Lifetime Achievement Award from the Oklahoma Center for the Book. In April 2004, she spoke at the Library of Congress in Washington D.C. on mysteries in American culture. She was also featured at the 2007 National Book Festival. She has been Guest of Honor and received the Lifetime Achievement Award and the Amelia Award from Malice Domestic.

Hart is a native of Oklahoma City, a Phi Beta Kappa journalism graduate of the University of Oklahoma and a former president of Sisters in Crime. She is also a member of Authors Guild, Sisters in Crime, Mystery Writers of America, the International Crime Writers Association, the International Thrillers Association, and the American Crime Writers League. She taught professional writing in the University of Oklahoma School of Journalism 1982-85. She is the author of 50 mysteries with 3 million books in print, winner of three Agatha Awards for Best Novel, two Anthonys and two Macavitys. She received the Ridley Pearson Award at Murder in Grove, Boise, Idaho, in 2005 for significant contributions to the mystery field.

What:  One commenter will win a Mass Market Paperback copy of Ghost in Trouble (Bailey Ruth 3)  by Carolyn Hart from The Qwillery.