Interview with Simon Jimenez, author of The Vanished Birds


Please welcome Simon Jimenez to The Qwillery as part of the 2020 Debut Author Challenge Interviews. The Vanished Birds was published on January 14, 2020 by Del Rey. 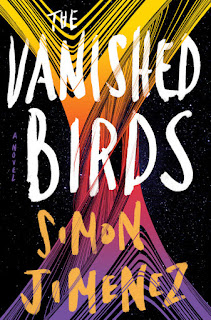 Simon:  When I was seven (eight?) I wrote a story called “The Time Machene” [sic]. It was about a cat that climbs a tornado like a ladder. What this has to do with the titular “machene” I couldn’t tell you, but it made perfect sense to my child brain.

Simon:  A hybrid. I usually start with the haziest suggestion of a plan, but that almost always gets tossed out while I’m in the thick of it. And after I’m done being a reckless idiot, I’ll come up with a new plan. And then toss that one out. I’ll do this a few times more before I reach the end of whatever I’m working on.

Simon:  Like for a lot of people, it’s filling up that blank page. The first draft neuroses. Getting over yourself and finally putting something down, so that you can do the actual work of revising.

Simon:  Books that I loved. Gabriel Garcia Marquez’s One Hundred Years of Solitude, David Mitchell’s Cloud Atlas. And like most writers I suspect, a lot of my writing is powered by some base level fear and anxiety. Some unsettled thing. In this case, it was time and its inevitable passing.

TQ:  Tell us something about The Vanished Birds that is not found in the book description.

Simon:  There are sex scenes.

TQ:  What inspired you to write The Vanished Birds? What appeals to you about writing Science Fiction?

Simon:  For a while I’d been daydreaming about the central relationship in the book between a starship captain and a quiet boy, and I knew at some point I would put that story to paper. But when I set out and started writing this book, the only prerequisite I had was that there had to be a non-stereotypical gay male character at the center of events, somewhere. That was the most important thing to me. The rest followed in the process of writing.

There are many things about science fiction that appeal to me. There is often a bigness to these types of stories, a feeling of standing at the fringe end of our understanding of reality and looking out. For this book, I wanted the texture and color of space opera. Big impossible constructions and reality bending forces that are almost synonymous with magic.

TQ:  What sort of research did you do for The Vanished Birds?

Simon:  Since the story is set so far into the future (about a thousand years) I had a lot of allowance to just make shit up, which is what I did, in earnest. I did light research for the chapter set in the near-future, on a too-warm earth; little things that would help sell the fiction. Learning where on earth I could put the space elevators. Everything else I invented or pulled from my working knowledge of things.

TQ:  Please tell us about the cover for The Vanished Birds.

Simon:  The vividly colorful shape on the front cover does depict something from the novel—a kinetic and galaxy-shaping force. It is not a coincidence that it has the contour of an hourglass.

TQ:  In The Vanished Birds who was the easiest character to write and why? The hardest and why?

Simon:  The easiest by far was Sartoris Moth, a far future socialite who likes to talk grandiloquently. His love of words, and his awareness of self, makes it fun to write in his voice. The hardest was the young man around whom the narrative revolves. His background is so outside my own realm of experience and understanding that it took extra effort on my part to create someone coherent and whole.

TQ:  Does The Vanished Birds touch on any social issues?

Simon:  A few. Global warming. The all-consuming force of corporate expansionism. The cultural effects of tourism. Things that are not necessarily the main thrust of the narrative, but rather carpet it.

TQ:  Which question about The Vanished Birds do you wish someone would ask? Ask it and answer it!

Q: Can you speak about the variety of emotion and narrative scope in the story? A: Like my favorite authors I am a fan of maximalism. I like it when I read a book or watch a movie and it is obvious that the author or director or even composer left nothing on the table in the conception and creation of the work. I wanted to capture that here. Put all of myself in the book, and don’t hold back for a sequel or another work, writing in the romance and the adventure and the big ideas and the quiet and reflective moments. To be generous with my offerings.

TQ:  Give us one or two of your favorite non-spoilery quotes from The Vanished Birds.

“Weeks passed with the boy as her shadow, he stitching himself slowly each day to the soles of her feet.”

“One day, I will ask what it is he hears, when he hears the notes of music: the infernal, or the celestial. Judging by what I hear now—the flute song through my open door—it is most likely something in between. A fiery heaven all its own.”

Simon:  I’m working on my second book right now. Different genre, mythic fantasy this time. A five-day chase through a land ravaged by a violent despot. Should be out next year if things work out. A mysterious child lands in the care of a solitary woman, changing both of their lives forever, in this captivating debut of connection across space and time.

“The best of what science fiction can be: a thought-provoking, heartrending story about the choices that define our lives.”—Kirkus Reviews (starred review)

Nia Imani is a woman out of place. Traveling through the stars condenses decades into mere months for her, though the years continue to march steadily onward for everyone she has ever known. Her friends and lovers have aged past her. She lives only for the next paycheck, until the day she meets a mysterious boy, fallen from the sky.

The scarred boy does not speak, his only form of communication the haunting music he plays on an old wooden flute. Captured by his songs and otherworldly nature, Nia decides to take the boy in to live amongst her crew. Soon, these two outsiders discover in each other the things they lack. For him, a home, a place of love and safety. For her, an anchor to the world outside of herself. For both of them, a family. But Nia is not the only one who wants the boy.

A millennia-old woman, poised to burn down the future.

Fumiko Nakajima designed the ships that allowed humanity to flee a dying Earth. One thousand years later, she now regrets what she has done in the name of progress. When chance brings Fumiko, Nia, and the child together, she recognizes the potential of his gifts, and what will happen if the ruling powers discover him. So she sends the pair to the distant corners of space to hide them as she crafts a plan to redeem her old mistakes.

But time is running out. The past hungers for the boy, and when it catches up, it threatens to tear this makeshift family apart. 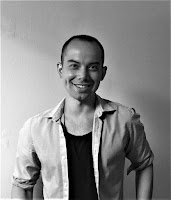 Simon Jimenez’s short fiction has appeared in Canyon Voices and 100 Word Story’s anthology of flash fiction, Nothing Short Of. He received his MFA from Emerson College. This is his first novel.