Interview with Chana Porter, author of The Seep


Please welcome Chana Porter to The Qwillery as part of the 2020 Debut Author Challenge Interviews. The Seep was published on January 21, 2020 by Soho Press. 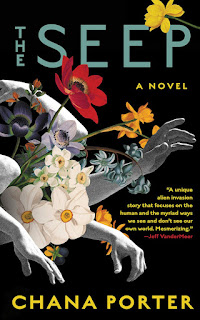 Chana:  Happy to be here! Thanks for having me.

I wrote a lot of poetry and stories as a child. I remember my second grade teacher reading a story I had written about pirates out loud to the rest of the class, without asking me. It was a strange feeling. I had just transferred from a modern orthodox Jewish school in Baltimore to a public school in the suburbs and I felt shy about being the new kid. But I liked the feeling of having my imagination acknowledged. The delight won out over the embarrassment.

Chana:  I’m a hybrid! I dream the major plot points before sitting down to write. If I don’t have a clear idea of some major parts of the action, I know I’m not ready. But if I clearly imagine everything too well, I find the process loses its life force. I’ll write juicy scenes out of order, as well, and then fill in the gaps. I also rewrite A LOT. Loads end up on the cutting room floor, so to speak.

Chana:  I love every part of being a writer and I feel extremely lucky to get to do it. That being said— I find generative early drafts very fun. Later on in the process, it can feel almost athletic to go back into a draft and work on the entire book. I eat protein bars and drink lots of water when overhauling a draft.

Chana:  I wouldn’t be the writer I am without Octavia Butler, Ursula K. Le Guin, Samuel Delany, Jeff VanderMeer. Those are the big ones for me. I also love film and theater— could go on and on about my influences there (and you’ll see some shout outs to my favorite filmmakers in The Seep!) And Star Trek.

TQ:  Tell us something about The Seep that is not found in the book description.

Chana:  It’s a novel about grief and loss, amongst other things, but it’s actually very funny. I’m not interested in spending time with characters without good senses of humor. Being alive on this tiny spinning planet is often very ridiculous.

TQ:  What inspired you to write The Seep?

Chana:  I’m interested in what our world would look like if it was life affirming for its inhabitants. I don’t think it’s our nature to oppress people, to draw these fictitious borders, to poison our ecosystem. So I wanted to create a utopia that gets people thinking about the collective choices we’re making in our current reality. Then I wanted to use this frame of a softer, abundant future to explore complex issues and emotions, like grief and loss, identity and community. Because I don't think we can move towards a more equitable future without acknowledging past oppressions, nor should we gloss over difference in an effort to celebrate oneness. I’ve attempted to create a story which is not didactic, but gives the reader a lot of personal agency and responsibility in answering the questions the novel raises. A reader remarked that I leave about half of the questions I raise unanswered— that balance feels right. I’m asking you to engage with me.

TQ:  What sort of research did you do for The Seep?

Chana:  A lot! I worked on this book for seven years, and researched as I went. I read a lot of science fiction that dealt with utopia (or things that seem like utopia, which is more often the case with the genre.) I read essays about communes and communal living. I went to the Next Systems conference where I attended lectures about permaculture and alternate forms of currency. (I was there teaching a workshop with my summer institute The Octavia Project, so it was a wonderful synchronicity.) I researched different indigenous tribes in the Northeast to narrow down where I though Trina’s ancestry should partially be from— my main character is part Native American, part Jewish. I’m Jewish, so I didn’t research that, but I was reading a lot about Yiddish theater traditions for my own interest, and that certainly influenced the creation of another character, YD. Everything makes its way into the work. So that was the more formal research. And then other specific details about characters and settings are inspired from my own community and mentors, my experiences in cooperatively living and working. Rachel Pollack was my advisor at Goddard College, where I began writing. She was an invaluable mentor for the creation of the world.

TQ:  Please tell us about the cover for The Seep.

Chana:  Soho Press (who are so wonderful) asked me for my input. I said I wanted the cover to feel like “lush overgrowth, water, flowering, fruiting -- or anything that alludes to the natural world overtaking the domestic.” The wonderful designer Michael Morris made the most gorgeous cover. Better than I could have dreamed!

TQ:  In The Seep who was the easiest character to write and why? The hardest and why?

Chana:  When I began The Seep, it was a much longer novel with three shifting points of view— three main characters. Trina pushed out the other two storylines— she took over! She was very easy to write. I didn’t find the other characters particularly challenging, but I do find that writing a group scene is a tight rope balancing act.

TQ:  Does The Seep touch on any social issues?

Chana:  Quite a few. The main conflict of The Seep explores complex issues around identity and agency, in a future where you can change your appearance at will. I won’t say more than that.

Additionally, my protagonist, Trina, is an older trans lesbian. I wanted to celebrate a trans elder character who is at home in her body and has a loving marriage, a successful career, deep friendships. And then, of course, I had to make her suffer. Because great characters struggle (and I think no beautiful life is without its own intensity.)

TQ:  Which question about The Seep do you wish someone would ask? Ask it and answer it!

Chana:  I’m SHOCKED no one has asked me “If you had the opportunity, would you be Seeped?”

I think yes! How could I resist? But, you know— in moderation. :)

TQ:  Give us one or two of your favorite non-spoilery quotes from The Seep.

Chana:  This one always makes me chuckle. It’s from the beginning of the book, as part of a larger catalogue of the changes The Seep has brought to the earth:

“All debts were forgiven. The student loan people threw away their phones.”

Chana:  I have a big novel that’s almost finished, and about 20K of the next one ready to be explored. In my life as a playwright, my play with music WE ARE RADIOS will be workshopped at Shotgun Players in Berkley, CA this August 4th-5th.

Chana:  Thank you for the work you do to support debut authors! 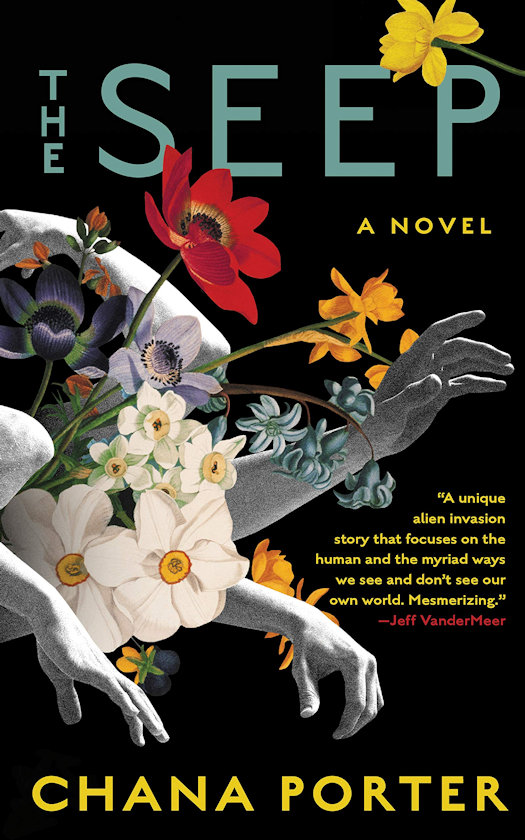 Trina Goldberg-Oneka is a fifty-year-old trans woman whose life is irreversibly altered in the wake of a gentle—but nonetheless world-changing—invasion by an alien entity called The Seep. Through The Seep, everything is connected. Capitalism falls, hierarchies and barriers are broken down; if something can be imagined, it is possible.

Trina and her wife, Deeba, live blissfully under The Seep’s utopian influence—until Deeba begins to imagine what it might be like to be reborn as a baby, which will give her the chance at an even better life. Using Seeptech to make this dream a reality, Deeba moves on to a new existence, leaving Trina devastated.

Heartbroken and deep into an alcoholic binge, Trina follows a lost boy she encounters, embarking on an unexpected quest. In her attempt to save him from The Seep, she will confront not only one of its most avid devotees, but the terrifying void that Deeba has left behind. A strange new elegy of love and loss, The Seep explores grief, alienation, and the ache of moving on.

Chana Porter is a playwright, teacher, MacDowell Colony fellow, and co-founder of the Octavia Project, a STEM and fiction-writing program for girls and gender non-conforming youth from underserved communities. She lives in Brooklyn, New York, and is currently at work on her next novel.