Review: The Garden of Blue Roses by Michael Barsa 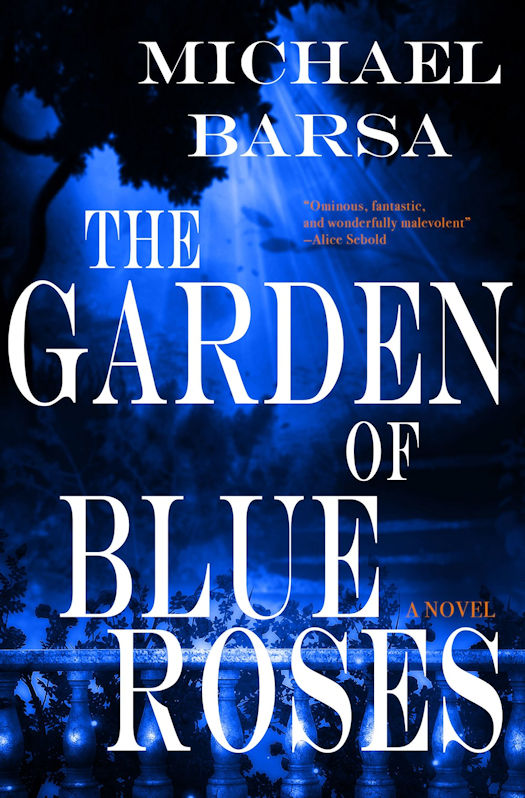 A car lies at the bottom of an icy ravine. Slumped over the steering wheel, dead, is the most critically acclaimed horror writer of his time. Was it an accident? His son Milo doesn't care. For the first time in his life, he's free. No more nightmarish readings, spooky animal rites, or moonlit visions of his father in the woods with a notebook and vampire make-up.

Or so he thinks.

Milo settles into a quiet routine―constructing model Greek warships and at last building a relationship with his sister Klara, who's home after a failed marriage and brief career as an English teacher. Then Klara hires a gardener to breathe new life into their overgrown estate. There's something odd about him―something eerily reminiscent of their father's most violent villain. Or is Milo imagining things? He's not sure. That all changes the day the gardener discovers something startling in the woods. Suddenly Milo is fighting for his life, forced to confront the power of fictional identity as he uncovers the shocking truth about his own dysfunctional family―and the supposed accident that claimed his parents' lives.

The Garden of Blue Roses, a stylish Gothic debut by Michael Barsa, has a pitch-perfect uneasy atmosphere and is peopled with complex characters whose motivations slowly unfold, like grainy time lapse photography. As one character says over the course of events, the secret to creating fear is planting belief. Seeds of belief are sown in The Garden of Blue Roses, but they are scattered amongst plentiful seeds of doubt. The result is an enigmatic tale, reminiscent of Shirley Jackson’s We Have Always Lived In the Castle, but with its own strong and unique voice.

Klara and Milo Crane, the adult children of celebrated horror author, John Crane, live on an isolated estate in rural Vermont. As the story opens, their father’s car skids off the road in a suspicious, fatal accident that also claims the life of their alcoholic, mostly-absentee mother. Klara, the older sibling, is left as caretaker of hearth and home, under Milo’s attentive gaze.

The tenuous peace in the house begins to unravel when Klara hires landscape artist Henri Blanc to transform the grounds into an elaborate memorial garden in honor of their parents. Milo doesn’t trust Henri and his vague credentials. He finds the gardener to be slick and manipulative, and thinks Klara, who has long-struggled with relationships, may be willfully overlooking signs that Henri is after more than her flowerbeds.

From the beginning, we share headspace with Milo, a classic but still fresh-feeling unreliable narrator. Milo spends his days constructing painstakingly accurate historical models of military vessels. His encyclopedic knowledge of his father’s most popular character, the monstrous serial killer Keith Sentelle, paints Milo with a dark brush. Everything we experience is run through the filter of Milo’s very precise, somewhat paranoid outlook. Is he protecting his sister, his father’s legacy, and the family home, or is he simply imagining a menace that isn’t there?

All the while, John Crane’s presence hangs over the house, his deep-rooted influence over his children slowly revealing its dark nature. As Henri insinuates himself between Klara and Milo, the story becomes a frantic pas de trois between the siblings and the man who may be just a humble gardener or something far more sinister.

This is a strong debut. Barsa’s skill with metaphor makes the story a very visual one. Klara and Milo come across as authentic, though warped by their very non-traditional upbringing. They both present as decisive and vulnerable, bright and naive. There are unexpected sparks of humor, passages of brilliant and curious introspection, all delivered by an author who clearly loves wordplay. The start was a little slow for me, but this was probably because it isn’t easy to cozy up to Milo at first. Once hooked by the narrative, though, I remained hooked.

I’d recommend The Garden of Blue Roses to fans of unreliable narrator stories, intricately plotted Gothics, and quirky character studies. While the story isn’t a splatter-fest, you should expect some well-telegraphed gore. Enjoyed the story, loved the characters, and felt the conclusion was a very satisfying end to a well-told tale. I occasionally re-read books to appreciate how they’re constructed, and this one has been added to my “to be re-read” list. I’ll definitely be watching for Barsa’s next work.
Posted by Qwill at 5:15 AM