PRISM STALKER, VOL. 1 LANDS IN STORES THIS SEPTEMBER
Collects issues #1-5
PORTLAND, OR, 07/12/2018 — Sloane Leong (FROM UNDER MOUNTAINS, A Map to the Sun) will release a trade paperback collection of the first five issues of her vivid, psychedelic sci-fi series PRISM STALKER this September.

Far from the border of colonized space, a newly discovered planet teems violently with strange psychic life and puzzling telekinetic ecology. Indentured refugee Vep is taken by a private military firm to assist in settling this new world. What awaits her there will test the limits of her will as she grapples with the strange power the planet exerts over her…

“Weird, beautiful, and bursting with ideas, PRISM STALKER is modern science fiction
with much to say and an incredibly exciting way of saying it.”
—Jamie McKelvie (The Wicked + the Divine)

“Overflowing with imagination, balanced with a high level of craft and storytelling
expertise that makes every choice confident and specific.” —AV Club

“PRISM STALKER is such a vibrant and brilliant journey through life and loss. Sloane's
handle on fantastic imagery and nuanced emotion explodes off the page.” —Leslie
Hung (Snotgirl)

“Complex, challenging and alien, PRISM STALKER is a comic that reads unlike almost
anything else out there, but feels so in tune with what’s happening in the world that it’s
almost unsettling.” —The Hollywood Reporter

“Sloane’s eye for sci-fi/fantasy is unlike anything else out there; PRISM STALKER is a
unique, gripping, and vivid must-read that breaks the comics mold in a much-needed
way.” —Iasmin Omar Ata (Mis(h)adra)

“Sloane Leong speaks with one of the most exciting and fresh new voices in comics.
PRISM STALKER is a bold declaration.” —Matt Fraction (Sex Criminals)

“PRISM STALKER unfolds slowly and carefully like a delicate piece of paper, but here,
the paper is not of any ordinary design; instead, this work by writer and artist Sloane
Leong is a remarkable piece of origami where every facet is a different shade, every
fold some intrepid experiment in color.” —The Oregonian 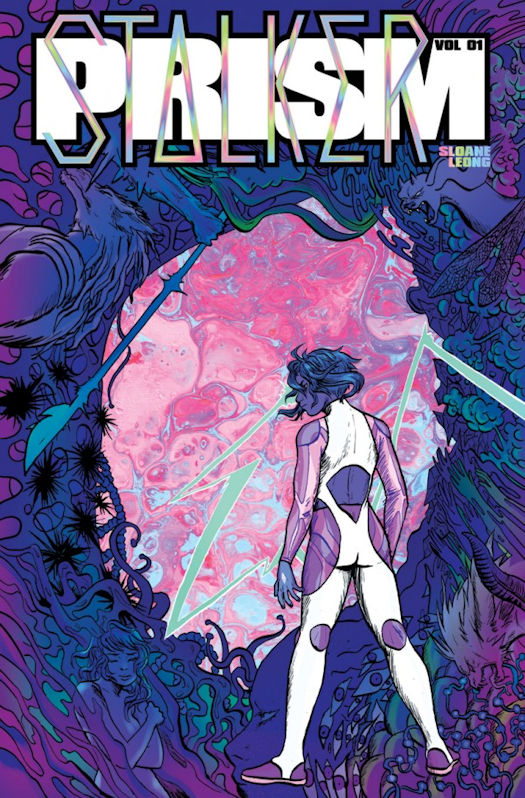 ABOUT IMAGE COMICS
Image Comics is a comic book and graphic novel publisher founded in 1992 by a collective of bestselling artists. Image has since gone on to become one of the largest comics publishers in the United States. Image currently has five partners: Robert Kirkman, Erik Larsen, Todd McFarlane, Marc Silvestri, and Jim Valentino. It consists of five major houses: Todd McFarlane Productions, Top Cow Productions, Shadowline Comics, Skybound Entertainment, and Image Central. Image publishes comics and graphic novels in nearly every genre, sub-genre, and style imaginable. It offers science fiction, fantasy, romance, horror, crime fiction, historical fiction, humor and more by the finest artists and writers working in the medium today. For more information, visit www.imagecomics.com.
Posted by Qwill at 6:33 AM