Please welcome TJ Berry to The Qwillery as part of  the 2018 Debut Author Challenge Interviews. Space Unicorn Blues was published on July 3rd by Angry Robot. 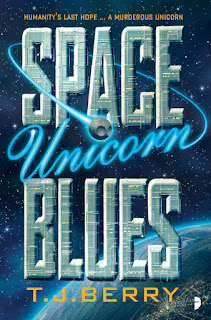 TJ:  The first thing I ever wrote was a Famous Five fan fiction story when I was ten years old. I was living in Hong Kong, and British boarding school books and the Famous Five were all the rage among the primary school crowd. Five Go Off in a Caravan was life-changing for me. I couldn’t imagine that four children and their dog were allowed to go off on their own and camp near the circus for the summer, solving actual crimes. My mother wouldn’t even allow me to walk to the corner store on my own.

TJ:  I’m a hybrid writer. I always start with a question instead of an outline. In Space Unicorn Blues it was, “Is humanity worth saving?” Outlines are excellent for honing a story, but for what I call the zero draft, I aim to be expansive. I give myself permission to write anything related to the story. This includes scenes out of order, tangents about minor characters, and even alternate endings. The goal at this stage is to shut off my inner editor and allow for every possibility on the page.

Before the next draft, I outline the story into a cohesive shape, making notes about what needs to be added and deleted. I also write a synopsis to ensure the story makes sense from start to finish. As rewrite, I mold the text to fit the new outline and this is usually where I find the heart of the story. I make a few more passes to add description, exposition, and pull out themes, then send it off to an editor who tears it all apart and the process starts from the beginning.

TJ:  I have an aversion to exposition and description, just ask my editor. My early drafts look like screenplays—with chapters full of only dialogue and stage directions. I have to spend a lot of time ensuring that the backstory that’s in my head ends up on the page and the locations I create are actually laid out for the reader.

TJ:  Even though I primarily write science fiction, most of my writing influences come from the horror world. I grew up on Stephen King novels. When I was twelve, I found Cujo in the trash after my mother had thrown it away in disgust. It was mesmerizing. I put aside my Babysitter’s Club books and plowed through King’s entire back catalog instead.

I add visceral horror in the early stages of everything I write—there’s a lot of daily life that’s downright horrific. I edit most of the more disturbing pieces out of my science fiction work; though in this book you’ll find remnants in some scenes involving Gary and his horn.

TQ:  Tell us something about Space Unicorn Blues that is not found in the book description.

TJ:  If you were ever curious about the purpose of the bug-eyed alien “greys” that purportedly visit Earth, Space Unicorn Blues has an answer for you. One thing that always terrifies me about the idea of alien visitations is not that they’re malicious, but that they’re apathetic. It’s much easier to fight an aggressive alien threat than it is to try to prove your entire species should be worthy of consideration as thinking beings.

TQ:  What inspired you to write Space Unicorn Blues? What appeals to you about writing Science Fiction?

TJ:  I wrote Space Unicorn Blues out of spite. My lovely husband was trying to console me after yet another rejection on a bizarre short story and he suggested that I write more “normal” stories. Instead of following his advice, I turned around and resolved to write the most outlandish story I could dream of. The joke was on both of us when I sold the book.

Science fiction is invaluable as a way for humans to extrapolate future paths of current actions from within the safety of fiction. Our speculative storytelling can be a warning of dire things to come or a beacon of hope during dark times. Also, I like space.

TQ:  What sort of research did you do for Space Unicorn Blues?

TJ:  Not only did I do a tremendous amount of research on my own, I also hired several experts and sensitivity readers to help ensure my characters were as accurate as possible. For example, Captain Jenny Perata has used a wheelchair for the last decade. It was important to have a disabled person read the book to ensure that Jenny’s experience using a chair in space was handled with accuracy and respect.

TQ:  Please tell us about the cover for Space Unicorn Blues?

TJ:  The cover was a collaboration between Angry Robot’s publisher, Marc Gascoigne and artist Lee Gibbons. I absolutely love how it conveys the seriousness of space and technology while also suggesting the unpredictable outlandishness of the magical creatures who are also in the story. There’s even an asteroid to suggest Gary’s faster-than-light starship, the Jaggery.

TQ:  In Space Unicorn Blues who was the easiest character to write and why? The hardest and why?

TJ:  I’m always able to slip into Jenny Perata’s voice quite easily. She’s strong, smart, and swears like a sailor. She’s tremendous fun to write. Gary Cobalt is a character that I dearly love, but he is also very difficult to write. He’s so lawful good—without much moral ambiguity—that it takes a bit more work to keep his point of view from getting too strident. In fact, I originally had most of the book in his voice and during rewrites I took those chapters and gave them to Jenny. Sorry, Gary!

Cowboy Jim’s head is a terrible place, which is why he gets only one chapter in this book. I’m currently working on the sequel, which has a lot of Jim’s point of view and he’s a downright despicable person.

TQ:  Does Space Unicorn Blues touch on any social issues?

TJ:  Space Unicorn Blues takes on a couple of big social issues. First, it asks what responsibility colonizers have toward the people they have colonized, displaced, and exploited. Second, the book asks if humans are capable of sharing the universe with other creatures at all. I don’t think we come to a tidy resolution on either of those questions, but it definitely grapples with them throughout the story.

TQ:  Which question about Space Unicorn Blues do you wish someone would ask? Ask it and answer it!

TJ:  I wish someone would ask where the Sisters of the Supersymmetrical Axion live. The answer is that they have a fortified abbey on an island in the middle of an ocean planet. It’s steeped in magic and weirdness and I hope to be able to bring readers there someday.

TQ:  Give us one or two of your favorite non-spoilery quotes from Space Unicorn Blues.

TJ:  "Harboring silent resentments was like stabbing yourself and hoping the other person died."

“Humans were never more persistent than when they were in the wrong."

TJ:  I’m working on a sequel to Space Unicorn Blues which is, for the moment, totally secret. I can say that we’re going to pick up with Jenny, Gary, Ricky, and Jim where we left off in the first book. There are a lot of questions which need to be resolved, daring escapes to be had, and it wouldn’t be space opera without few explosions in orbit.

TJ:  Thank you for having me! 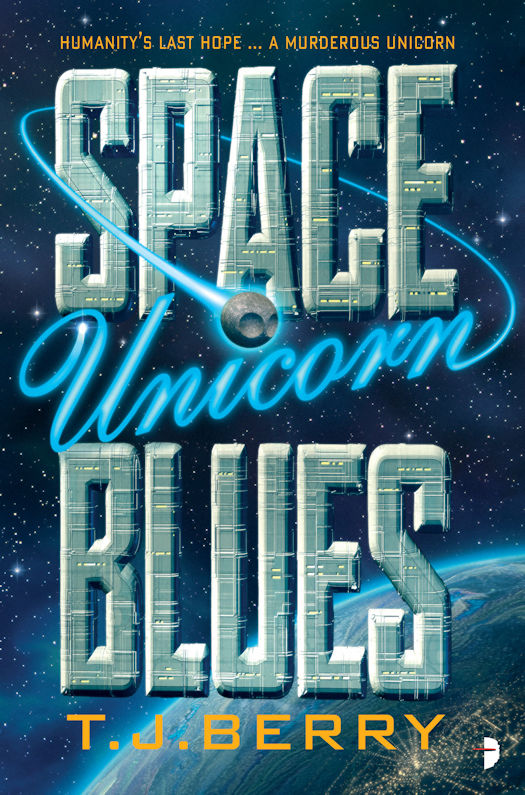 A misfit crew race across the galaxy to prevent the genocide of magical creatures, in this unique science fiction debut.

Humanity joining the intergalactic community has been a disaster for Bala, the magical creatures of the galaxy: they’ve been exploited, enslaved and ground down for parts. Now the Century Summit is approaching, when humans will be judged by godlike aliens.

When Jenny Perata, disabled Maori shuttle captain, is contracted to take a shipment to the summit, she must enlist half-unicorn Gary Cobalt, whose horn powers faster-than-light travel. But he’s just been released from prison, for murdering the wife of Jenny’s co-pilot, Cowboy Jim… When the Reason regime suddenly enact laws making Bala property, Jenny’s ship becomes the last hope for magic.

File Under: Science Fiction [ Rocks in Space | Stand Up to Reason | The Human Experiment | Last Unicorn ]

TJ BERRY grew up between Repulse Bay, Hong Kong and the New Jersey shore. She has been a political blogger, bakery owner, and spent a disastrous two weeks working in a razor blade factory. TJ co-hosts the Warp Drives Podcast with her husband, in which they explore science fiction, fantasy, and horror. Her short fiction has appeared in Pseudopod and PodCastle.