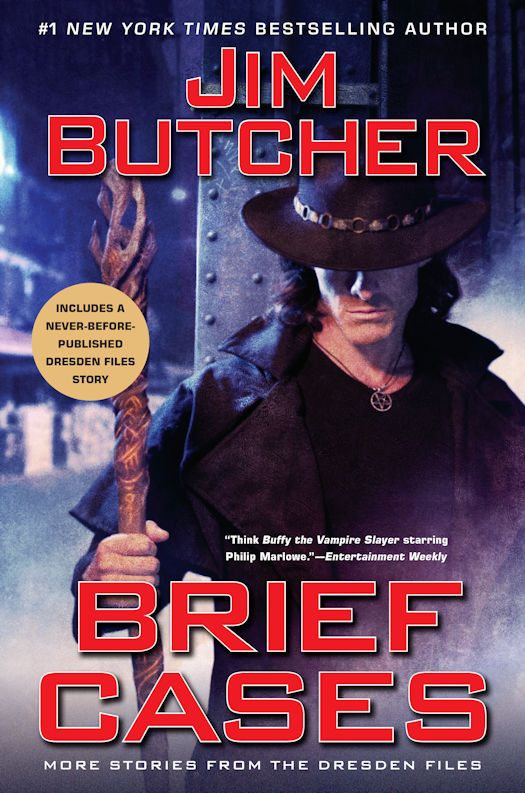 The world of Harry Dresden, Chicago’s only professional wizard, is rife with intrigue—and creatures of all supernatural stripes. And you’ll make their intimate acquaintance as Harry delves into the dark side of truth, justice, and the American way in this must-have short story collection.

From the Wild West to the bleachers at Wrigley Field, humans, zombies, incubi, and even fey royalty appear, ready to blur the line between friend and foe. In the never-before-published “Zoo Day,” Harry treads new ground as a dad, while fan-favorite characters Molly Carpenter, his onetime apprentice, White Council Warden Anastasia Luccio, and even Bigfoot stalk through the pages of more classic tales.

With twelve stories in all, Brief Cases offers both longtime fans and first-time readers tantalizing glimpses into Harry’s funny, gritty, and unforgettable realm, whetting their appetites for more to come from the wizard with a heart of gold.

It has been a while since a Harry Dresden novel has been published and the next one scheduled, Peace Talks, is still is a long time off. Thankfully, Butcher writes short stories with his main character and others. Better yet, he collects them into a complete anthology like Brief Cases. As a completist, I appreciate that I do not have to purchase multiple other anthologies to ensure that I have every Harry Dresden story, including a new one that has never appeared before.

In his introduction to “B is for Bigfoot,” Butcher explains that he researched monsters from all around the world when he started writing his series, but it was not until after several books, that he thought about America’s Bigfoot. The three related stories actually focus on a Bigfoot’s son, Irwin, and some of the problems he faces as a Bigfoot/human hybrid.

Butcher does not just write about Dresden in his short stories; he also writes about some of his other characters, which not just fleshes them out more fully for character development, but also gives us some different perspectives on Harry himself. Three of the stories are about his apprentice, Molly, both before and after she becomes the fairy queen, Winter.

The last story here, “Zoo Days,” is my favorite in the bunch, not just because it is new, but because it is about Harry and his daughter. Here the story itself is split into thirds, with each main character (Harry, Maggie, and Mouse) taking lead as narrator for a section. As a reader, this is my first introduction into Maggie’s narration, and it is eye-opening. It makes me wonder what Butcher may have in store for the future of his characters.
Posted by Qwill at 5:05 AM